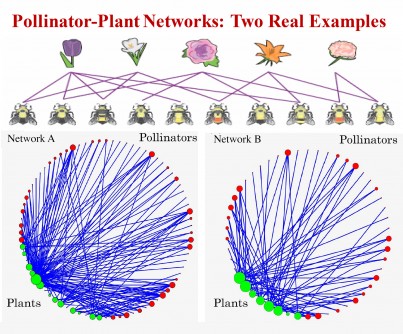 Newswise — A new method to predict tipping points –  the moment at which sudden change occurs in complex networked systems – may offer insights that prevent colony collapse disorder (CCD), a phenomenon in which the majority of worker bees in a colony disappear, threatening the agricultural economy at a global level.

In 2015-2016, U.S. beekeepers lost 44 percent of their honey bee colonies, according to a survey funded in part by the U.S. Department of Agriculture.

The paper, “Predicting tipping points in mutualistic networks through dimension reduction,” published this week in the Proceedings of the National Academy of Sciences as an extended research article (PNAS Plus), was developed by a team of researchers from Arizona State University and universities in China, the U.S., and the U.K.

The researchers used as their model system 59 empirical pollinator-plant networks (pollination interactions between bees and plants) from a variety of continents and climate zones, and arrived at a two-dimensional model that can accurately predict the occurrence of tipping points in each networked system. A tipping point in a pollinator-plant network is when all the pollinator populations (bees and plants) decrease to zero.

Networked systems range from ecosystems and earth’s climate to economic, social and infrastructure systems such as the power grid. Tipping points, or “phase changes,” occur when the components of a system begin to interact in a different way, manifesting as a sudden shift in system-wide behavior.

Common examples of tipping points include when heating water reaches the temperature at which it begins to boil or when a substance melts from a solid to a liquid.

“In a pollinator-plant network, a tipping point is the critical value of a certain parameter, such as the number of removed bee species or the death rate of the bee species, at which the populations of all bee and plant species decrease abruptly to near zero values,” explained the paper’s lead author Ying Cheng Lai, a professor of electrical, computer and energy engineering at ASU.  “The simultaneous collapse of all bee and plant populations occurs because they are mutually connected and interact with each other in a highly nonlinear fashion.”

Once a tipping point is predicted, control strategies can be developed to delay or even prevent its occurrence.  “For example, we can focus on a particular bee species and protect its abundance by introducing more bees to maintain the population at a steady level,” said Lai. “Or we can make policies to eliminate the use of certain pesticides that are harmful for this species of bees.

For each real network, the team calculated two typical resilience functions and compared them with those from the corresponding reduced 2D model. “We found across-the-board good agreement for all 59 empirical mutualistic networks, leading to the conclusion that our 2D model can accurately predict the occurrence of a tipping point even in the presence of random disturbances,” Lai said.

The reduced model can serve as a paradigm for understanding and predicting tipping point dynamics in the real world for safeguarding pollinators, and the general principle is broadly applicable to addressing the issues of resilience and sustainability in other disciplines of science and engineering.

“The occurrence of a tipping point is of grave concern as it may lead to a sudden and total collapse of the system,” explained Lai. “To predict the tipping point and understand the responsible dynamical processes are essential to formulating effective control strategies to delay or even prevent it from occurring. This will be of significant value to protecting and sustaining complex systems that are of critical importance to the modern society and human lives.”