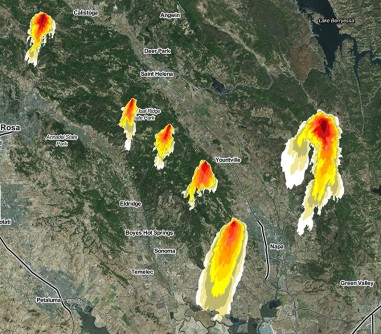 Some WIFIRE models of this week’s Sonoma and Napa Valley, CA wildfires over a six-hour timespan, showing their fast progression. Each color is half an hour of activity. 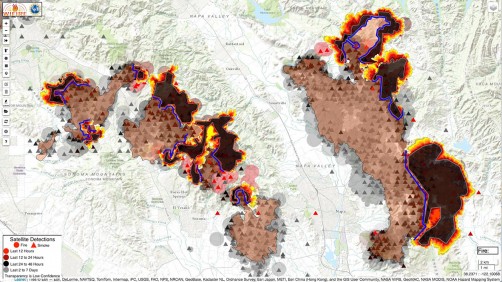 This image shows another run of simulations from this week’s wildfires in Sonoma and Napa, CA using the WIFIRE project’s Firemap tool.

Newswise — A web-based tool recently developed by UC San Diego researchers to perform data-driven predictive modeling and real-time tracking of fires has already been viewed about one million times and generated more than 115,000 unique visitors since the outbreak of numerous wildfires across Northern California late last weekend.

Called Firemap and developed by the university’s ‘WIFIRE’ collaboration, the resource enables a ‘what-if’ analysis of fire scenarios ahead of time as well as for real-time fire forecasting. The overall goal of WIFIRE, the result of a multi-year National Science Foundation (NSF) grant, is to make data and predictive models readily available so that the direction and rate of fire spread can be known as early as possible to assist in rescue and containment efforts.

“Views of Firemap have dramatically – and understandably – increased in recent days as firefighters and other first responders do their best to contain this unusually high concentration and rapid spread of wildfires that has already caused enormous damage and caused the loss of more than 30 lives,” said Ilkay Altintas, chief data science officer at the San Diego Supercomputer Center (SDSC) at UC San Diego and principal investigator for WIFIRE. “It is our hope that Firemap continues to help both first responders and residents to better cope in this time of extreme crisis.”

As of early Friday, at least 31 people have died and some 3,500 homes and businesses were destroyed by the blazes, which could become the deadliest and most destructive in California history, according to the Associate Press. More than 8,000 firefighters were still battling the blazes, which started October 8 and soon leveled entire neighborhoods in parts of Sonoma and Napa counties. As some 20 wildfires raged for a fifth day and many remained out of control, the flames spanned more than 300 square miles (777 square kilometers), an area equivalent to the size of New York City’s five boroughs, said the AP.

Firemap has already attracted some interest of a number of fire departments. Since late 2015, the WIFIRE team has had a partnership with the Los Angeles Fire Department (LAFD) focused on a pilot study to use WIFIRE’s new Firemap tool in real-time fire situations. The WIFIRE team and LAFD tested the operational aspects of the developed technology in 2016, and in monitoring the Sand, Blue Cut, and Soberanes fires that burned more than 200,000 acres combined in California last year, the comparison between the fires’ actual daily progression and WIFIRE’s real-time prediction model were extremely close.

WIFIRE’s Firemap data resource also provides easy access to information on past fires, past and current weather conditions as well as weather forecasts, satellite detections as fast as they are received, HPWREN camera images, and information on vegetation and landscapes from a variety of sources. These are all datasets available on different websites that viewers can now see in one place, achieve programmatic access via web services, and be used for planning fire response and management of natural resources well ahead of time.

The WIFIRE project includes researchers from SDSC, as well as the university’s California Institute for Telecommunications and Information Technology’s (Calit2) Qualcomm Institute, and the Mechanical and Aerospace Engineering (MAE) department at the Jacobs School of Engineering. The University of Maryland’s Department of Fire Protection Engineering is also a project participant.

The Qualcomm Institute is the UC San Diego division of the California Institute for Telecommunications and Information Technology (Calit2). The institute’s strategic vision stresses collaborative, interdisciplinary research in four core areas to benefit society: culture, energy, the environment, and health. QI also prototypes and builds enabling technologies (wireless, photonics, cyberinfrastructure, and nano-micro-electromechanical systems, or nano-MEMS). In addition, the institute plays a leadership role in the development of new institutes and research centers for the UC San Diego campus on topics ranging from robotics and the brain to design. 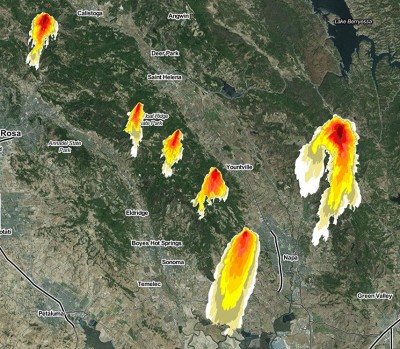 Caption: Some WIFIRE models of this week’s Sonoma and Napa Valley, CA wildfires over a six-hour timespan, showing their fast progression. Each color is half an hour of activity. 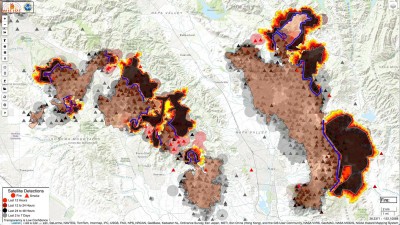 Caption: This image shows another run of simulations from this week’s wildfires in Sonoma and Napa, CA using the WIFIRE project’s Firemap tool.