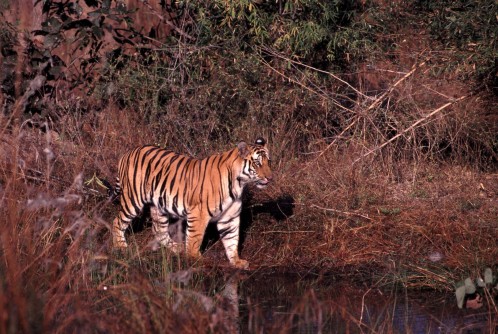 Newswise — FORT LAUDERDALE/DAVIE, Fla. – They are one of the most majestic and, at the same time, threatened animals on the planet – tigers. Some estimates put the total number of tigers in the wild at just around 4,000.

While there have been conservation efforts for many years, it is a never-ending struggle. Some estimates say that just a century ago there were more than 100,000 cats in approximately 13 countries. Fast-forward to 2018 and not only has the number of tigers plummeted, wild tigers no longer exist in Cambodia and Vietnam and for all intents and purposes are extinct in China, Laos and much of Myanmar.

Debate has also raged about how many subspecies of tigers there were – and now a research project confirms that tigers do, in fact, fall into six distinct groups. The study has been published in Current Biology (October 25, 2018.)

These six subspecies include: the Bengal tiger,, Amur tiger, South China tiger, Sumatran tiger, Indochinese tiger and the Malayan tiger, first proposed in 2004. Three other tiger subspecies have already been lost to extinction.

“Tigers are rapidly headed for extinction in the wild, and the loss seen over the past few decades is increasing and is happening in spite of intense conservation interest, surveillance, legal protection, and expenditure,” said Stephen O’Brien, a research scientist at Nova Southeastern University’s (NSU) Halmos College of Natural Sciences and Oceanography. “The tiger depletion stands as one of conservation’s most poignant morality tales of loss.”

O’Brien, who is also the Chief Scientific Officer at the Theodosius Dobzhansky Center for Genome Bioinformatics, St. Petersburg State University, Russia, was part of the team responsible for this latest study. He was recently elected to the National Academy of Sciences (NAS.)

O’Brien is well known for his research contributions in comparative genomics, virology, genetic epidemiology, mammalian systematics and species conservation. In 1983, he and his collaborators discovered the remarkable genetic uniformity of the African cheetah, a prelude to a new discipline of Conservation Genetics. In addition, O’Brien has been part of an international consortium of scientists working to detail the genome sequence of 48 different birds. This group of researchers – who call themselves the Avian Phylogenomics Group – is made up of 200 scientists from 80 institutions in 20 countries. This group is an “outgrowth” of the Genome 10K Project (G10K,) which was co-founded in 2009 and led by O’Brien.