Researchers found that red is a novel colour that originated within this lineage of butterfly, and is potentially more effective in deterring predators 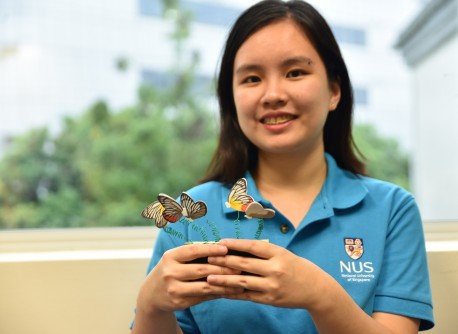 Newswise — A research team from the National University of Singapore (NUS) has unraveled the mystery behind the wing colours of the Painted Jezebel, a common butterfly found in urban and forested landscapes throughout the Asia-Pacific region, known for its bright yellow and red wing colours.

While these striking colours have long been presumed to advertise the butterfly’s unpleasant taste to predators and deter attacks, their exact function had not been shown. The study, conducted by Miss Jocelyn Wee and Associate Professor Antónia Monteiro from the Department of Biological Sciences at the NUS Faculty of Science, showed that the Painted Jezebel butterfly uses red and yellow colours on their wings as warning signals, with red being a novel and potentially more effective colour to members of this lineage of butterflies.

The findings were published in the open access scientific journal PLOS ONE in early 2017.

To conduct field experiments, Miss Jocelyn Wee, a PhD candidate at the NUS, constructed artificial paper models that displayed the natural resting position of the Painted Jezebel, in which its wings are held vertically over its body. The paper models comprised a faithful colour representation of the Painted Jezebel, a grey scale model, as well as models with different colour permutations.

The paper models were placed at three sites across Singapore where the Painted Jezebel can be naturally found, namely along Kent Ridge Road, Tampines Eco-Green and Jurong Eco Garden.

“The results of our field experiments showed that the red and yellow colours on the ventral wings of the Painted Jezebel serve as warning signals to predators, and demonstrated how predators can play a critical role in affecting the evolution of warning colours within this particular butterfly genus,” explained Miss Wee, who carried out the experiments as part of her final-year project when she was doing her undergraduate studies.

The evolution of colours in butterfly wings

The NUS research team followed up on their results by mapping dorsal and ventral colouration onto a phylogeny of the diverse genus Delias, which the Painted Jezebel belong. They observed that yellow and red colours appear almost exclusively on the exposed ventral wing surfaces, and that older lineages have mostly yellow, white and black wing markings, with red appearing as a novel trait in later lineages.

“Our findings demonstrated that red appears to be a novel and potentially more effective protective colour to members of this lineage of butterflies,” said Assoc Prof Monteiro, who supervised the study. “Such a discovery raises further questions about the possible changes in the underlying genetic networks that would have caused the emergence of red colouration within this speciose genus.”

Moving forward, the research team is working to resolve the genetic pathways that underline the evolution of novel wing patterns across different butterfly genera.