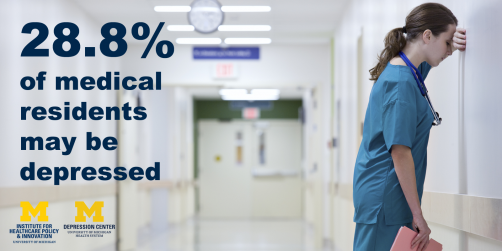 The key finding from a new comprehensive study of data from interns and residents.

Newswise — ANN ARBOR, Mich. — More than one in four doctors in the early stages of their careers has signs of depression, a comprehensive new study finds. And the grueling years of training for a medical career may deserve some of the blame.

That’s bad news not just for the young doctors themselves, but also for the patients they care for now and in the future. Depressed doctors are known to be more likely to make mistakes or give worse care.

The startling findings come from a careful investigation of 50 years’ worth of studies that looked for depression symptoms in more than 17,500 medical residents.

It’s published in the new issue of the Journal of the American Medical Association by a team led by a current resident at Harvard and a University of Michigan Medical School psychiatrist who specializes in studying physician mental health.

The team aimed to find definitive answers to questions that have been studied many times and in many ways: What percentage of new doctors might be depressed, and how much does that change over time?

By collecting and combining data from 54 studies done around the world, the researchers concluded that 28.8 percent of physicians-in-training have signs of depression.

There was a small but significant increase in the rate of depression over the five decades covered by the study.

“The increase in depression is surprising and important, especially in light of reforms that have been implemented over the years with the intent of improving the mental health of residents and the health of patients,” says Srijan Sen, M.D., Ph.D., senior author of the new study and a member of U-M’s Depression Center, Institute for Healthcare Policy and Innovation, and Molecular and Behavioral Neuroscience Institute.

Sen worked with the study’s lead author -- Douglas Mata, M.D., M.P.H., of Harvard University -- and the other authors to pull together and analyze a wide range of studies.

They focused on the first post-medical school training years, called internship and residency. Those years are marked by long hours, intensive on-the-job learning, low rank within a medical team, and a high level of responsibility for minute-to-minute patient care.

While the percentage of residents with possible depression found by any one study ranged from 20 percent up to 43 percent, the bottom line when all the data were equalized and tallied together came out to 28.8 percent.

Having a definitive number, and definitive evidence that the proportion of new doctors with depression symptoms increases over time, should help spur action to help address these issues, Sen says.

While many medical schools and teaching hospitals have begun to address student and trainee mental health more completely in recent years, more needs to be done, the authors note.

“Our findings provide a more accurate measure of the prevalence of depression in this group, and we hope that they will focus attention on factors that may negatively affect the mental health of young doctors, with the goal of identifying strategies to prevent and treat depression among graduate medical trainees,” Mata says.

In addition to Sen and Mata, the study’s authors include Marco A. Ramos, MPhil, MSEd, Narinder Bansal, Ph.D., Rida Khan, B.S., Constance Guille, M.D., M.S., and Emanuele DiAngelantonio, M.D., Ph.D. Guille, who was an intern with Sen at Yale and is now on faculty at the Medical University of South Carolina, is co-investigator on the Intern Study.

For more about the Intern Study, visit http://umhealth.me/internstudy

This research was supported by the U.S. Department of State Fulbright Scholarship, the National Institutes of Health MH101459, and NIH Medical Science Training Program GM07205.