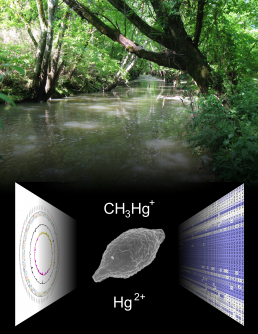 Researchers from Oak Ridge National Laboratory, the University of Missouri and University of Tennessee have identified the genes required for bacterial mercury methylation.

The question of how methylmercury, an organic form of mercury, is produced by natural processes in the environment has stumped scientists for decades, but a team led by researchers at Oak Ridge National Laboratory has solved the puzzle. Results of the study, published in the journal Science, provide the genetic basis for this process, known as microbial mercury methylation, and have far-reaching implications.

“Until now, we did not know how the bacteria convert mercury from natural and industrial processes into methylmercury,” said ORNL’s Liyuan Liang, a co-author and leader of a large Department of Energy-funded mercury research program that includes researchers from the University of Missouri-Columbia and University of Tennessee.

“This newly gained knowledge will allow scientists to study proteins responsible for the conversion process and learn what controls the activity,” said Liang, adding that it may lead to ways of limiting methylmercury production in the environment.

For some 40 years scientists have known that when mercury is released into the environment certain bacteria can transform it into highly toxic methylmercury. Exactly how bacteria make this happen has eluded scientists. The challenge was to find proteins that can transfer a certain type of methyl group and to identify the genes responsible for their production.

Ultimately, by combining chemical principles and genome sequences, the team identified two genes, which they named hgcA and hgcB. Researchers experimentally deleted these genes one at a time from two strains of bacteria, which caused the resulting mutants to lose the ability to produce methylmercury. Reinserting these genes restored that capability, thus verifying the discovery.

The researchers found that this two-gene cluster is present in all known mercury-methylating bacteria, and they predicted that more than 50 other microorganisms may methylate mercury because they have a pair of similar genes.

Another key to the development was the collection of talent assembled to work on this problem.

“This discovery was made possible by our diverse team, which includes scientists with expertise in chemistry, computational biology, microbiology, neutron science, biochemistry and bacterial genetics,” said Liang, who rated this paper as one of the most satisfying of her career.

Mercury is a toxin that spreads around the globe mainly through the burning of coal, industrial use and through natural processes such as volcanic eruptions. The chemical element bioaccumulates in aquatic food chains, especially in large fish. Various forms of mercury are widely found in sediments and water.

In a report just released by the United Nations Environmental Programme, Achiim Steiner, United Nations under-secretary general and executive director of UNEP, notes that “mercury remains a major global, regional and national challenge in terms of threats to human health and the environment.”

UT-Battelle manages ORNL for DOE’s Office of Science. The Office of Science is the single largest supporter of basic research in the physical sciences in the United States and is working to address some of the most pressing challenges of our time. For more information, please visit http://science.energy.gov/.