Amber piece of the Ariño site with a lock of mammalian hair. This is the oldest finding of hair in amber. 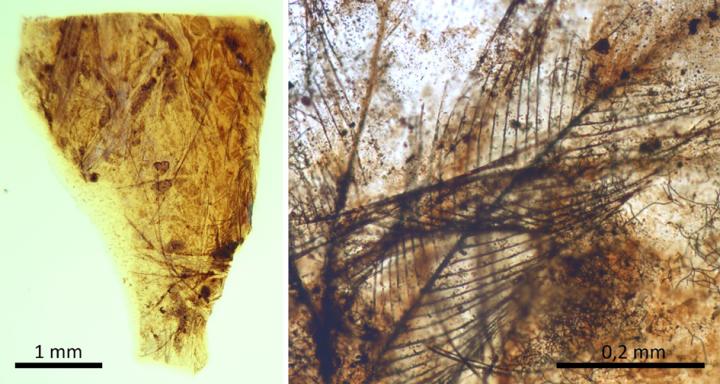 Newswise — A team of palaeontologists described two amber pieces found in sites in Teruel (Spain) with remains from vertebrates corresponding to the Early Cretaceous. Both pieces have their origins in the same conservation process of resins, described for the first time by the researchers. One of these remains corresponds to the finding of the oldest mammalian hair in amber worldwide, and the remains found in the other piece correspond to dinosaur feathers.

The team, whose results have been published in the journal Scientific Reports, is formed by SergioÁlvarez Parra and Xavier Delclòs, both from the University of Barcelona; Mónica M. Solórzano Kraemer, from the Senckenberg Natural History Museum (Frankfurt, Germany); Luis Alcalá, from Dinópolis (Teruel), and Enrique Peñalver, from the Geological and Minning Institute of Spain (Valencia).

The origin of both pieces is in the resin formed about 105 and 110 million years ago, corresponding to the Early Cretaceous. The cretaceous sites of amber are abundant in the Iberian Peninsula, and its study has provided many findings of global relevance. In particular, Teruel province has many of these sites.

One of the pieces was found years ago in the amber site in Sant Just, in Utrillas, and another in Ariñi, in the Santa María mine, both in Teruel. The piece from Sant Just includes remains of dinosaur feathers distributed in the convex surface of amber with a stalactite shape.

The amber from Ariño presents three mammalian hairs with its characteristic microscopic scale pattern, exceptionally preserved. The parallel disposition of the three hairs and their similar proportions allow researchers to identify it as a small lock from a mammal and it corresponds to the oldest finding of hair in amber. "The determination of both findings is very complex, but it is likely for the feather remains to correspond to the extinct birds Enantiornithes, like other feathers in amber. Regarding the lock of hair, we should consider that the surface scale pattern is similar to the current mammalian hair", notes Sergio Álvarez, researcher at the UB and first author of the study. "Ariño was already known for its vertebrate fossils, such as the dinosaurs

Proa valdearinnoensis and Europelta carbonensis, but no-one thought we could find remains from vertebrates included in amber", adds Álvarez.

A new conservation process for resin

In the study, the researchers described for the first time a process they call "pull off vestiture", through which small portions of the feather and fur of a living being are trapped after being in contact with a sticky mass of resin, the necessary amount of time for it to harden.

The dinosaur and the mammal to which the feathers and the lock of hair correspond, respectively, from the studied amber pieces taht were in contact with resin while they were resting or sleeping in or near a tree. Later, with movement, these epidermal structures were torn off. When the resin hardens, the entire structures are removed, but the closer portions are not covered by the resin and are not preserved.

A similar but not identical process has been observed in sticky traps that three of the researchers installed on resin trees in Madagascar. These traps also retained hairs from mammals that touched them although, due to their high stickiness, they quickly ripped them off at minimal contact. "The feature of the process described in this research is that a somewhat long time must pass between the animal's contact with the resin and the pulling off of the vestiture", points out Xavier Delclòs, professor at the Faculty of Earth Sciences and member of the Biodiversity Research Institute (IRBio) of the UB. "Thus, the findings of this study and the new process shed light on the complexity of ecosystems during the Cretaceous," concludes the researcher.

Both amber pieces in the study are in the Palaeontological Museum of Aragon (Fundación Conjunto Paleontológico de Teruel - Dinópolis) and both add more value to the large palaeontological heritage of the province of Teruel.

This research has been partially funded by the Spanish Ministry of Economy, Industry and Competitiveness of the Spanish Government, National Geographic and the Volkswagen Foundation, and counted on the collaboration of Dinopolis. The project thanks the Directorate-General of Cultural Heritage of the Aragon Government and SAMCA Group, which exploits the Ariño mine, for the given permits to carry out paleontological interventions. The study is part of Sergio Álvarez Parra's doctoral thesis, which counts on the support of the Secrtary for Universities and Research of the Catalan Government and the European Social Fund.

Caption: Amber piece of the Ariño site with a lock of mammalian hair. This is the oldest finding of hair in amber.