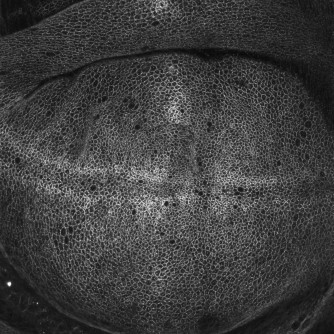 Newswise — There is an old axiom among cell biologists meant to caution against making assumptions about how certain proteins function, and it involves a hypothetical Martian. If that Martian came to Earth and looked down at a school from its spaceship, it would assume the main job of the school buses is to sit in a parking lot all day, because except for a few hours in the morning and afternoon, that’s all they do.

Likewise, if someone (whether Martian or Earthling) looked through a microscope for proteins that help control organ growth, they would assume they only functioned at the edges, or junctions, of cells, because that’s where they mostly accumulate. But a new study from the University of Chicago suggests that while these proteins do accumulate around the edges of cells, they actually function at a different cellular site.

'Tumor suppressors' are genes that normally function to restrict tissue growth. When these genes are inactivated by mutations, cancerous tumors can result. Researchers have taken advantage of the power of genetic experimentation in the fruit fly Drosophila melanogaster to exhaustively identify all of the tumor suppressor genes in flies. In the early 2000s, researchers determined that most of these genes were all part of the same system, dubbed the Hippo signaling pathway. Remarkably, these genes are not exclusive to flies and function similarly in a host of other organisms, including humans, suggesting that the system goes far back in evolutionary time as a critical controller of cell function. Early returns also indicate that the Hippo pathway is a likely contributor to human cancers and other tumor syndromes, including neurofibromatosis.

While the Hippo pathway has been firmly established, scientists are still looking for how elements upstream turn the pathway on and off. Three different proteins associated with the cell membrane—Kibra, Merlin and Expanded—regulate pathway activity, but scientists aren’t sure how. The conventional wisdom is that all three operate together at the intracellular junctions, but using a combination of advanced imaging and genetic tools to observe and manipulate these proteins in live tissues, UChicago postdoctoral researcher Ting Su, PhD, discovered that Merlin and Kibra work together to activate the Hippo pathway in a separate area called the medial apical cortex. Meanwhile, Expanded works independently to activate the pathway at the junctions.

“There has been some evidence that these components interact with one another biochemically, but genetically they seem to form two independent inputs into the pathway,” Su said. The results of this work were published Mar. 13, 2017 in the journal Developmental Cell.

Su said that the key to understanding the activity of these proteins was being able to observe them endogenously, or as they occur normally in living epithelial tissues that form the wing of the fly, fused to fluorescent protein tags. Using a high-sensitivity, confocal microscope, Su and his colleagues could see a honeycomb-like mesh of circles, where the glowing proteins gathered at cell junctions—i.e. the school bus parking lots—as expected. But looking carefully, they also saw clusters of activity at a non-junctional site called the medial apical cortex, meaning that the proteins were functioning in another cellular region at the same time.

The downstream results seem to be the same whether the process is initiated by the proteins in the center of the cell or those at the junctions—when the Hippo pathway is activated, it acts as a throttle, signaling that it’s time for organs to stop growing. What’s not clear are the upstream inputs, or what causes one means of activating the pathway to be triggered over the other. One possibility may be mechanical tension in the cells. As tissues grow, cells stretch and squeeze against each other, generating tension across the tissue that cells might sense through junctions with their neighbors.

“The current thinking is that might be one way the tissues sense how big they are. As they grow, that generates mechanical tension, and it’s clear that tension feeds into pathway activity through the junctions,” said Rick Fehon, professor and chair of the Department of Molecular Genetics and Cell Biology, and senior author on the study.

At the same time, each cell can generate internal tension using a motor protein called myosin, a mechanism cells use to change shape. “We’re interested in the possibility that this medial localization might be a way to sense tension generated within cells,” he said.

Tissue growth is an inherent part of developmental biology, but only recently have researchers focused on understanding the cellular mechanisms that regulate it.

“The really great thing about working with flies is the genetic tools that make this possible,” Fehon said. “It’s the ability to combine those with new, advanced microscopy approaches to figure out whether the school bus functions when it’s in the parking lot, or when driving around.”

The study “Kibra and Merlin activate the Hippo pathway spatially distinct from and independent of Expanded,” was supported by the National Institutes of Health (R01NS034783) and the Children's Tumor Foundation (2013-01-020 and 2014-01-020). Additional authors include Michael Ludwig and Jiajie Xu, both from the University of Chicago.