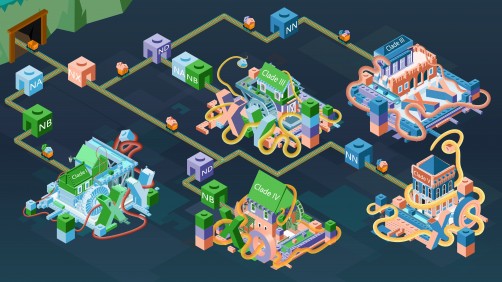 Newswise — Studying two highly divergent phyla of worms that contain numerous parasites that cause human and livestock diseases, the research group of Qi Zhou from the University of Vienna and Zhejiang University, sheds light on how sexual reproduction and subsequent great diversity of sex chromosomes might have evolved.

Animals or plants with separate sexes are widespread in nature, and result from independent transitions from their hermaphroditic ancestor. The actual mechanism involved in the transitions between asexual and sexual reproductive modes, in other words, how is sex originated, remains an important and unanswered question. Excluding insects, about one third of the animal species, such as earthworms, snails, and some teleosts, are hermaphroditic. A comparison with their relatives who have evolved separate sexes, might reveal, how this particular trait originated and evolved in animals.

A new paper in Nature Communications, published by Qi Zhou of Department of Neuroscience and Developmental Biology in University of Vienna and Zhejiang University in China, provides clues into how separate sexes originated and characterizes how sex chromosomes evolved in flatworms or roundworms.

Although both phyla are called ‘worms’, from an evolutionary point of view, they are very divergent from each other. A common feature of both phyla is that that numerous representatives, such as tapeworm and schistosomes (commonly known as blood flukes), are parasites to human or livestock and can cause severe symptoms and complications. Identification of and studies into their sex-related genes can provide the basis for disruption of their reproductive cycle in future for effective parasite control.

The research group surrounding Qi Zhou, collected already published genome and transcriptome data of 41 nematode species, and 13 flatworm species, the latter of which comprise mostly hermaphroditic species except for schistosomes (blood flukes). Among these, they identified sex chromosome composition of 17 nematode species in terms of ‘Nigon elements’. These are ancestral chromosome units which are shared by all nematodes, and named after the nematode biologist Victor Nigon (in parallel to ‘Muller elements’ of fruitfly, another genetic model species). With this comparison, the authors showed that the great diversity of nematode sex chromosomes is a result of different combinations of Nigon elements. By recurrent addition of different Nigon elements, which previously had been non-sex chromosomes, onto the ancestral sex chromosomes, different nematode species extended their sex-linked regions which later suppressed recombination during evolution.

Another important finding comes from the comparison of the sexually reproducing blood flukes to related hermaphroditic species. The transition into the state of separate sexes in the parasite occurred relatively recently, around 70 million years ago. The authors showed that during this transition, the gonad genes of schistosomes became less “feminized”, in other words overall showed a lower ovary expression level compared to their counterpart in the hermaphroditic related species. They also identified a candidate gene, mag-1, whose disruption in schistosomes causes enlarged testis. Mutations in this gene might have played a critical role for the transition into the separate sexes of schistosomes.