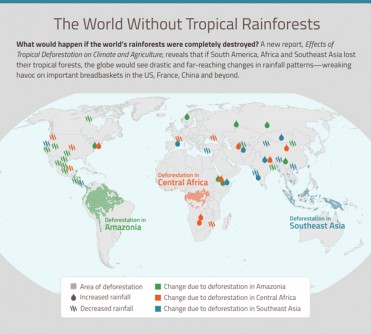 Newswise — LONDON, UK (18 December 2014)—A new study released today presents powerful evidence that clearing trees not only spews carbon into the atmosphere, but also triggers major shifts in rainfall and increased temperatures worldwide that are just as potent as those caused by current carbon pollution. Further, the study finds that future agricultural productivity across the globe is at risk from deforestation-induced warming and altered rainfall patterns.

The report, “Effects of Tropical Deforestation on Climate Change and Agriculture,” published today in Nature Climate Change and released in collaboration with Climate Focus provides the most comprehensive analysis to date of the climate impacts of tropical forest destruction on agriculture in the tropics and thousands of miles away. Specifically, the study finds that deforestation in South America, Southeast Asia and Africa may alter growing conditions in agricultural areas in the tropics and as far away as the US Midwest, Europe and China.

The study is also the only global synthesis of research based on cutting-edge climate models and empirical data on the direct local, regional and global impacts of cutting down tropical forests, which regulate interactions between the earth and the atmosphere. It predicts that atmospheric impacts resulting from complete tropical deforestation could lead to a rise in global temperature of 0.7 degrees Celsius (on top of the impact from greenhouse gases), which would double the observed global warming since 1850. Currently, climate change negotiators are shaping policies that focus on greenhouse gases, in particular carbon. To date, they have overlooked policy responses that address other ways that forests affect climate.

“Tropical deforestation delivers a double whammy to the climate—and to farmers,” said Deborah Lawrence, Professor of Environmental Sciences at the University of Virginia, the study’s lead author. “Most people know that climate change is a dangerous global problem, and that it’s caused by pumping carbon into the atmosphere. But it turns out that removing forests alters moisture and air flow, leading to changes—from fluctuating rainfall patterns to rises in temperatures—that are just as hazardous, and happen right away. The impacts go beyond the tropics—the United Kingdom and Hawaii could see an increase in rainfall while the US Midwest and Southern France could see a decline.”

The report presents compelling evidence that tropical deforestation is already affecting local and regional climates. Meteorological data, for example, show that in Thailand, the beginning of the dry season is experiencing less rainfall due to deforestation. And in parts of the Amazon, the world’s largest stretch of rainforest, the timing of once-predictable rainfall has shifted due to deforestation. In deforested regions, the wet season is delayed by two weeks; in forested regions, there are no changes.

“Teleconnections,” associated with the mass movement of air and conditions in the upper atmosphere, have the potential to extend the impacts of tropical deforestation on climate globally. An increase in temperature in the tropics due to deforestation generates large upward-moving air masses. When these hit the upper atmosphere they cause ripples, or teleconnections, that flow outward in various directions, similar to the way in which an underwater earthquake can create a tsunami.

Models examined in the study showed that increased or complete deforestation could put the climate in some of the world’s most important agriculture regions off kilter. These variations in rainfall and spikes in temperature could occur across the world, according to the report.

For example, complete deforestation of the Amazon Basin would likely reduce rainfall in the US Midwest, Northwest and parts of the south during the agricultural season. The complete deforestation of Central Africa would likely cause declines in rainfall in the Gulf of Mexico and parts of the US Midwest and Northwest and increase it on the Arabian Peninsula. There could also be precipitation declines in Ukraine and Southern Europe.

“While complete deforestation is unlikely to occur, over the course of history, deforestation has continued as countries develop,” Lawrence said. “Further, this study fills gaps in our understanding of deforestation tipping points—and what could happen if we continue down this path.”

Turning up the heat, turning down the rain

Across the board, the study reports, deforestation poses risks to agriculture by causing an increase in average temperature, a decline in average rainfall and a change in the location and timing of rainfall. Deforestation, for example, would lead to a reduction in rainfall between 10-15 percent in the region surrounding where the deforestation took place.

According to Lawrence, there is almost always an increase in temperature with deforestation. “This does not change, no matter what you do—no matter what kind of model you use, temperature increases occur—whether it’s half a degree, a full degree or two degrees.”

“That’s a very big deal,” said Lawrence. “In the last few centuries, the average global temperature has never varied by more than about one degree. Once we go above one degree—to 1.5 degrees or more—we’re talking about conditions that are very different from anything humanity has ever experienced.” Because crops are highly sensitive to changes in temperature and moisture, she added, they would suffer in hotter conditions. Increased floods or decreases in soil moisture would further add to stress on crops.

“Farmers, so reliant on consistent and reliable growing conditions, could lose their bearings and even their incomes, when facing these ups and downs in temperature and rainfall,” Lawrence said. “While farmers may ultimately adapt to shifts in the season, it’s difficult—if not impossible—for farmers to adapt to increased floods or parched soils.”

Forests: Not Lungs but Sweat Glands

Because forests turn water from soil into moisture in the air, they cool the atmosphere above them. Tropical forests move more water than any other ecosystem on land. They are central to the earth’s process of generating and regenerating moisture, so clearing ever-larger swathes of forest eventually leads to a drying and warming effect. By disturbing the movement of air in remote parts of the atmosphere, tropical deforestation throws temperature and rainfall patterns worldwide out of whack.

The impact of deforestation is diverse and varies across regions and scales—from small plots of farmland in the midst of the rainforest to large swathes of cattle pasture bordered by forests—but the more deforestation that occurs, the greater the impact.

“Tropical forests are often talked about as the ‘lungs of the earth,’ but they’re more like the sweat glands,” said Lawrence. “They give off a lot of moisture, which helps keep the planet cool. That crucial function is lost – and even reversed – when forests are destroyed.”

The study found that relatively small plots of deforestation can actually increase rainfall at a local scale. There is, however, a critical clearing size above which rainfall declines dramatically.

Models studied in the report show that in the Amazon and, possibly, in the Congo Basin, 30-50 percent may be the deforestation tipping point. Any additional forest clearing would lead to rainfall reductions that could significantly change ecosystems, and compound the risk of additional dangers, such as an increase in forest fires.

The location of deforested areas can also affect their impacts on regional climates, the study finds. Deforesting West Africa or the Congo could reduce rainfall across the region by 40-50% and increase temperatures there up to 3°C. Regional scale models project that in the Amazon Basin, clearing 40% of the forest would decrease wet-season rainfall by 12% and dry-season rainfall by 21%. It would also reduce by 4% rainfall in the Rio de la Plata Basin, a center for soy, corn and wheat production, thousands of miles south of the Amazon. Because Southeast Asia is surrounded by oceans, the impact of deforestation on regional temperatures and rainfall may be less severe.

To reduce the effects of deforestation on climate change, the data suggest it would be best to retain large swathes of forest across the tropical forest belt and to avoid large-scale deforestation in any single location.

Lawrence added that climate-change negotiators and other policymakers should take the impacts of deforestation seriously. “What happens on the surface of the earth (in terms of changes in vegetation) is a big factor in climate change. We ignore it at our own peril.”

About Deborah LawrenceDeborah Lawrence, Ph.D., is a Professor of Environmental Sciences at the University of Virginia. Her research focuses on the ecological effects of tropical deforestation. She has spent the past twenty-five years doing field-based research in Indonesia, Costa Rica, Mexico and Cameroon. Most recently, she has been using global climate models to explore the cumulative impact of tropical land use decisions, exploring the climate impact of land allocation among food crops, biofuels and forests across the globe. Professor Lawrence and her students conduct interdisciplinary research with partners in economics, anthropology, geography and hydrology to understand the drivers and consequences of land use change. This work has gained her a Sustainability Science Award from the Ecological Society of America, a Guggenheim Fellowship, a Jefferson Science Fellowship from the National Academy of Sciences, and a Fulbright Scholarship. She was a post-doctoral fellow at Harvard University, earned her Ph.D. (Botany) at Duke University, and received a B.A. (Biological Anthropology) from Harvard University.