6-Aug-2020 9:00 AM EDT, by Perelman School of Medicine at the University of Pennsylvania contact patient services
favorite_border 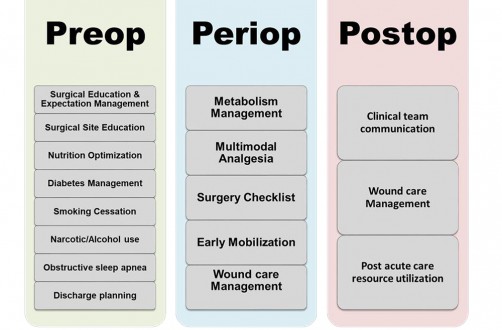 Newswise — PHILADELPHIA—The majority of patients who followed an “Enhanced Recovery After Surgery” (ERAS) protocol did not need opioids for pain management at multiple time points following elective spinal and peripheral nerve surgery. The findings come from an expanded analysis and study from researchers in the Perelman School of Medicine at the University of Pennsylvania, published in Pain Medicine. Researchers found that when an ERAS protocol was employed—which optimizes patients’ surgical care before, during, and after surgery—fewer patients needed pain medications at one, three, and six months after surgery.

The ERAS protocol developed at Penn includes a personalized, safe, and effective pain management plan to help prevent opioid addiction, which is an ongoing public health crisis in the United States. ERAS engages patients in their care before, during, and after their hospitalization—this process includes patient education, text reminders, nutrition information, early mobilization, and recovery plans. ERAS also relies on collaborative care between all individuals involved in the patient’s surgical journey, including anesthesiologists, rehabilitation therapists, nurses, and neurosurgeons, to improve clinical outcomes and optimize a safe recovery.

“We know from our clinical experience and previous literature that programs like ERAS work, but we didn’t expect the impact on opioid use to be so sizeable,” said senior author Zarina S., Ali, MD, an assistant professor of Neurosurgery at Penn. “The most important outcome from this study is the decrease in opioid use. Furthermore, patients following the ERAS protocol reported less opioid use without higher pain scores. This represents an important advance in the context of the current nationwide opioid epidemic.”

For this study, a total of 1,141 patients were enrolled in the ERAS protocol, compared to 149 historical controls who received the standard of care. Both groups had similar surgical procedures and demographics. Preliminary findings summarizing opioid use after one month of the ERAS protocol were published in the Journal of Neurosurgery: Spine in 2019. This Pain Medicine paper reports on continued benefits over an 18-month period utilizing the ERAS pathway in elective spinal and peripheral nerve surgery.

In addition to the significant reduction of opioid use, use of patient-controlled analgesia (PCA)—known as a pain pump—was nearly eliminated in the ERAS group (1.4 percent) compared to 61.6 percent of patients in the control group. ERAS patients were up and moving faster compared to control patients (63.5 percent vs. 20.7 percent), fewer ERAS patients required postoperative catheterization (40.7 percent vs 32.7 percent), and the ERAS group also had shorter hospital stays (3.4 vs. 3.9 days).

“Previous publications have demonstrated ERAS implementation in neurosurgery practices primarily through minimally invasive spinal surgery, but our neurosurgical practice has been actively applying ERAS principles to elective spine and peripheral nerve surgery since 2017, in coordination with a variety of departments across the health system,” said Tracy M. Flanders, MD, first author and Neurosurgery resident at Penn. “This study captures the exciting benefits of this protocol for minimizing opioid use, decreasing length of stay, and more—without impacting patient satisfaction.”

Penn Medicine is one of the world’s leading academic medical centers, dedicated to the related missions of medical education, biomedical research, and excellence in patient care. Penn Medicine consists of the Raymond and Ruth Perelman School of Medicine at the University of Pennsylvania (founded in 1765 as the nation’s first medical school) and the University of Pennsylvania Health System, which together form a $8.6 billion enterprise.

The Perelman School of Medicine has been ranked among the top medical schools in the United States for more than 20 years, according to U.S. News & World Report's survey of research-oriented medical schools. The School is consistently among the nation's top recipients of funding from the National Institutes of Health, with $494 million awarded in the 2019 fiscal year.

Penn Medicine is powered by a talented and dedicated workforce of more than 43,900 people. The organization also has alliances with top community health systems across both Southeastern Pennsylvania and Southern New Jersey, creating more options for patients no matter where they live.

Penn Medicine is committed to improving lives and health through a variety of community-based programs and activities. In fiscal year 2019, Penn Medicine provided more than $583 million to benefit our community.