24-May-2017 1:05 PM EDT, by Perelman School of Medicine at the University of Pennsylvania contact patient services
favorite_border 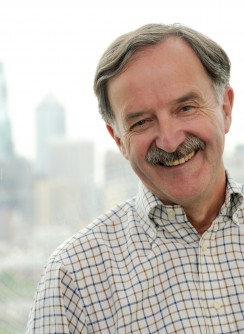 Newswise — PHILADELPHIA— Garret FitzGerald, MD, FRS, director of the Institute for Translational Medicine and Therapeutics in  the Perelman School of Medicine at the University of Pennsylvania, has received a $1 million Merit Award from the American Heart Association (AHA) to help the millions of patients with high blood pressure improve their condition. FitzGerald is also a professor of Systems Pharmacology and Translational Therapeutics.

FitzGerald’s five-year award, one of two nationally, aims to help “non-dippers,” the approximately 35 percent of high blood pressure patients whose pressure generally does not fall at night. This anomaly increases their risk of heart attack, stroke, and kidney disease. This elevated risk is linked to non-dippers encountering a longer period of exposure to high blood pressure levels over a daily, 24-hour span.

According to the U.S. Centers for Disease Control, about 75 million American adults (29 percent of the adult population) suffer from high blood pressure. The condition significantly increases the risk for heart disease and stroke, the first and third leading causes of death in the United States.

The Merit Award research is based on FitzGerald’s longstanding efforts to better understand the molecular clock that governs body rhythms, including its role in aging. He will seek to use and build on this knowledge to adjust release rates of generic blood pressure medications, offering the hope of increasing the medications’ effectiveness through the night for non-dippers and reverse dippers.

Since the drugs he will be studying are currently used by heart patients, his research will not have to undergo the intensive review-and-approval process of new medications. This approach has the potential to bring lifesaving benefits to patients faster, which is especially important in light of the growing occurrence of high blood pressure in an aging world population.

In announcing the honor, Ivor Benjamin, MD, chair of the AHA research committee, said the purpose of the Merit Award is to support “visionary leaders.” He described FitzGerald’s work as having the potential to “revolutionize the treatment for new classes of blood pressure medications.”