Results show antibiotic effects can linger, antiseptic impact not as strong as expected

20-Jun-2017 8:05 AM EDT, by Perelman School of Medicine at the University of Pennsylvania contact patient services
favorite_border 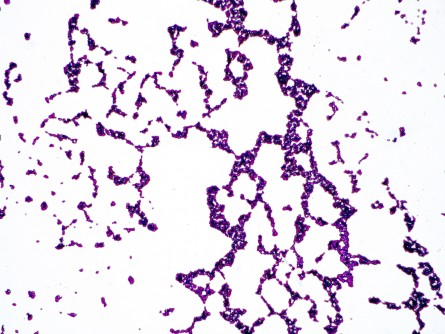 Gram stain of Staphylococcus on skin

Newswise — PHILADELPHIA – The use of topical antibiotics can dramatically alter communities of bacteria that live on the skin, while the use of antiseptics has a much smaller, less durable impact. The study, conducted in mice in the laboratory of Elizabeth Grice, PhD, an assistant professor of Dermatology in the Perelman School of Medicine at the University of Pennsylvania, is the first to show the long-term effects of antimicrobial drugs on the skin microbiome. Researchers published their findings today in the journal Antimicrobial Agents and Chemotherapy.

The skin, much like the gut, is colonized by a diverse multitude of microorganisms which generally coexist as a stable ecosystem – many of which are harmless or even beneficial to the host. However, when that ecosystem is disturbed or destabilized, colonization and/or infection by more dangerous microbes can occur. Antiseptics, such as ethanol or iodine, are commonly used to disinfect the skin prior to surgical procedures or following exposure to contaminated surfaces or objects. Topical antibiotics may be used to decolonize skin of specific types of bacteria or for rashes, wounds, or other common conditions.

In the gut, research shows medication that alters microbial communities can lead to complications like Clostridium difficile, or C. diff – which causes diarrhea and is the most common hospital-acquired infection. But when it comes to the skin, the impact of these medications on bacteria strains like Staphylococcus aureus, or S. aureus – the most common cause of skin infections – is still largely unstudied.

“We know antibiotics and antiseptics can be effective in stopping the growth of certain bacteria, but we wanted to know about the larger impact these treatments can have on the resident microbial communities on the skin,” said the study’s lead author, Adam J. SanMiguel, PhD, a researcher in the Grice Laboratory at Penn.

Researchers treated the skin of hairless mice with a variety of antibiotics, including a narrowly targeted mupirocin ointment and a broadly applicable triple-antibiotic ointment (TAO) containing bacitracin, neomycin, and polymyxin B. All of the antibiotics changed the makeup of the microbial communities, and, in a key finding of the study, the impact of that change lasted for days after treatment stopped.

“The problem in this case isn’t antibiotic resistance, but instead, how long the disruption of the skin microbiomes continues,” SanMiguel said. “That disruption opens the door for colonization by an unwanted strain.”

The researchers similarly evaluated antiseptics, using alcohol or povidone-iodine and comparing those treatments with two control groups – mice treated with water and mice entirely untreated. They found neither antiseptic caused responses similar enough to cluster the mice together into groups based on their microbiomes. They also found no clear difference between the treatment groups and the control groups when comparing the relative number of individual bacteria strains.

“We thought antiseptics would be even more disruptive to microbial communities than antibiotics since they are less targeted, but it turns out the opposite is true,” SanMiguel said. “It shows how stable the skin microbiome can be in the face of stress.”

However, both antibiotic and antiseptic treatments removed skin resident bacteria that compete against the pathogenic S. aureus to colonize the skin. Colonization with S. aureus is a risk factor for developing a skin infection.

“This gives us a better understanding of how topical antimicrobials affect the skin microbiome and what kind of impact their disturbance can have in the context of pathogenic colonization,” said Grice, the study’s senior author. “This helps us anticipate their potential effects.”

The researchers say this work can provide the foundation for greater understanding of how the skin defends against infection. They have already begun similar testing in humans.