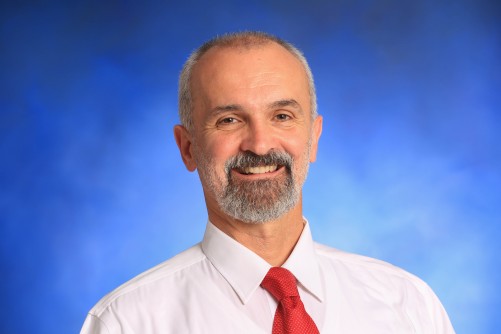 Dr. Emil Jovanov’s mHealth laboratory at UAH has developed a new suite of phone apps to monitor the physical mobility and stability of older people.

Newswise — HUNTSVILLE, Ala. (May 15, 2017) – A new suite of phone apps developed at The University of Alabama in Huntsville (UAH) uses Android smart phones to monitor the physical mobility and stability of older people.

That’s important because research has shown that small changes in the time required and the intensity of common everyday motions can be early indicators of health issues such as stroke or falls.

The applications were developed by Dr. Emil Jovanov, the 2014 Alabama Inventor of the Year, Dr. Aleksandar Milenkovic and doctoral students Mladen Milosevic (now at Philips Research, Boston, Mass.) and Priyanka Madhushri from the Electrical and Computer Engineering Department at UAH.

An Android phone loaded with the software developed at UAH, is worn in a chest-level harness. The patented software interfaces use sensors already built into the smart phone to create a device that is a sensor, recorder and communicator of mobility and stability data. All records are sent automatically to the personal medical record of the user on the mHealth server at UAH.

Over time, personalized data points could indicate trends that can inform a physician’s diagnoses and create the opportunity for early intervention. The apps also can track the progress of older people who are taking part in strength, stability and mobility improvement programs.

“We wanted to have something everyone could use in the comfort of their own home,” says Dr. Jovanov, who in 2000 was the first researcher to propose a system to wirelessly integrate sensors on or in bodies and communicate through the Internet for ubiquitous health monitoring. “The data automatically goes to your personal records, so it makes the jobs of nurses easier, and doctors could easily access these records and monitor progress between visits.”

The new software uses as a framework the standardized Centers for Disease Control tests for mobility. The Time Up and Go (TUG) test measures the time it takes for someone to rise from a seated position and walk a measured distance. The 30-second chair stand test measures the number of times a person can rise and be seated in the allotted time, and four-stage balance tests evaluate balance during standing. The application suite supports all tests recommended by the CDC.

The personalized assessment of mobility and stability can inform healthcare workers about a variety of health conditions, including the possibility of future falls.

“The reason we especially want to prevent falls is because in the elderly, a fall often triggers a downward spiral of declining health,” says Dr. Jovanov. Falls in some elderly patients may be due to prescribed drugs that can cause instability, or that interact with other drugs to do so. The monitor could provide early warning and a simple change of the drug might prevent falls.

Development of the apps started five years ago, initially focused on achieving a mobile operation that could perform the TUG test with a higher degree of precision than a human tester.

“Then we discovered that we can also use the app to isolate the phases of the TUG process,” Dr. Jovanov says. “It turns out that some of those unused parameters provide very good assessment of mobility and indicate possible future falls.”

For example, how far a person leans forward when getting up from a seated position is a measurement that directly correlates with the potential for falls. The sTUG app uses the phone worn in the chest harness to monitor angles and angular velocities at the chest.

A personalized model is currently under development by doctoral student Madhushri to assess the forces involved and energy used during the transition. The next generation of the software will allow the personalized assessment of performance versus a personal optimal transition, and will indicate the overall strength and wellness state of the user.

“Now we have a much greater set of parameters that physicians can use in their diagnoses, using height and weight to make a personal model to assess the forces and torques in the hip, knee and ankle during transition from sitting to standing,” says Dr. Jovanov. That allows doctors to assess how smoothly patients are accomplishing basic movements.

“We can run the test at home on the smart phone, and analyze changes to assess possible indications of change of health status,” Dr. Jovanov says.

For example, the monitor can be valuable in flagging the small changes in mobility and stability that research shows immediately follow mini-strokes.

“In the case of strokes, you have changes in both speed and stability,” Dr. Jovanov says. “Very often, a sequence of small strokes signals that a big stroke is coming. If you detect early the effects of the smaller strokes, then the physician may be able to prevent the big stroke.”

UAH researchers collaborated with Huntsville’s Center for Aging and Dr. Karen Frith from UAH’s College of Nursing to test the monitoring device in an elderly population aged 70 to 90-plus. During the successful testing, they found the monitor could play a vital role in a Center for Aging program that educates older adults about how to improve their mobility and stability.

“This device can give you immediate feedback about your progress in the program,” says Dr. Jovanov. “We had test subjects who needed 38 seconds to complete the TUG test at the beginning of the program, and they improved to just 19 seconds.”

Testing led to other developments, including using the data to create a personalized, optimal stand up metric for a given patient’s weight that can be used to measure improvements.

“A computer model shows how much force is needed for the personalized optimum transition and assesses forces in each transition during monitoring, which allows us to see exactly, based on specific transition data, how much force you have and how much progress you have made,” Dr. Jovanov says.

The new apps are either patented or patent pending, and are part of Dr. Jovanov’s mHealth suite of personalized medical monitoring projects, a 16-year endeavor that explores and has patented technology innovations that can improve people’s health and lives.

In addition to the new apps, a smart pill bottle that reminds and records when users take medication and when supply is getting low, a smart water bottle that reminds and records times of hydration, a mobility application for wheelchair-bound patients and enabling technologies for wearable personalized medical monitoring systems are among the products produced by the mHealth laboratory in UAH’s Engineering Building led by Dr. Milenkovic and Dr. Jovanov.

With increasing numbers of aging Baby Boomers and a limited supply of physicians and healthcare workers, the mHealth mobile health monitoring systems are considered to be architecture of choice for a new generation of personalized and predictive healthcare.

“The idea is that one day, you will be able to walk into your local Walgreens or CVS and purchase these devices inexpensively, or install the application on your smartphone,” he says. “They will help you to become proactive and more engaged and work with your physician to create a personalized medical monitoring and recording program that will help you to assess and improve your health and wellbeing.”