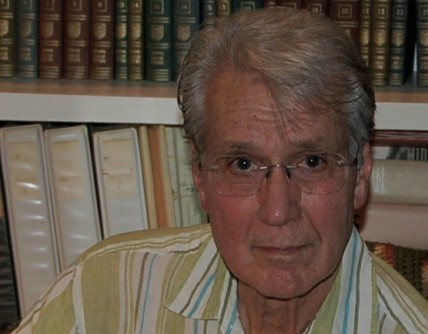 Newswise — FAYETTEVILLE, Ark. – Physicist Art Hobson has offered a solution, within the framework of standard quantum physics, to the long-running debate about the nature of quantum measurement.

In an article published August 8 by Physical Review A, a journal of the American Physical Society, Hobson argues that the phenomenon known as “nonlocality” is key to understanding the measurement problem illustrated by “Schrodinger’s cat.”

In 1935, Nobel Laureate Erwin Schrodinger used the example of a cat in a closed box to illustrate the central paradox of quantum physics: microscopic particles such as electrons, photons or atoms can exist in two quantum states at once. These states are known as “superpositions.”

“A measurement in quantum physics means using some sort of large-scale macroscopic device, such as a Geiger counter, to learn something about the quantum state of a microscopic system, such as an atom or a single photon,” Hobson said. “Quantum theory seems to imply that if you connect the microscopic system to a large-scale measuring device that distinguishes between the two distinct states of the microscopic system, then the Geiger counter will be also ‘entangled’ into a superposition of existing in two simultaneous states. However, this is something that we never observe and is not acceptable.”

Using Schrodinger’s illustration, Hobson said the cat plays the role of the Geiger counter that is connected to a radioactive nucleus in order to determine the decayed or undecayed state of the nucleus. A “live cat” would be a macroscopic signal of an undecayed nucleus and a “dead cat” would be the macroscopic signal of a decayed nucleus. Quantum theory seems to say that the cat should therefore be entangled into a superposition of being both dead and alive, he said.

Instead, Hobson writes in his article that the cat’s quantum state is “entangled” with the atom’s state, implying that there is an important “nonlocal relation,” or instantaneous action-at-a-distance, between the two. According to nonlocality, if any two entangled objects are sent in opposite directions and the state of one of them is altered, the second instantly alters its state in response no matter how far apart the two may be. Hobson cites direct experimental evidence supporting his analysis, from experiments performed in 1990 involving nonlocal observation of entangled pairs of photons.

“The strange thing is that the action happens instantly, with no time for light or an electromagnetic signal or radio signal to communicate between the two,” Hobson said. “It is a single object that is behaving as a single object but it is in two different places. It doesn’t matter what the distance is between them.

That phenomenon must be taken into account to resolve the measurement problem, he said. That means with Schrodinger’s cat, the cat is no longer predicted to be both dead and alive. It is instead dead if the nucleus decays, and alive if the nucleus does not decay, just as one would expect.

According to Hobson, since 1978, three previous published analyses have suggested similar solutions to the measurement problem, but the earlier solutions were little noticed at the time and the debate continued, “leading to confusion and even to pseudoscientific claims about the implications of quantum physics,” he said.

“It’s important to sort out the foundations of quantum physics,” Hobson said. “This theory is more than a century old now, and these ideas have been out there but they haven’t been noticed or taken seriously enough. It is my hope that this resolution of the measurement problem will now be accepted by the quantum foundations community.”