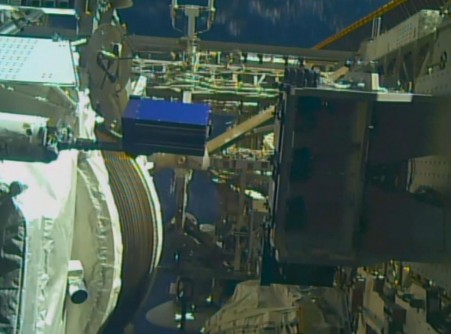 Newswise — A batch of pills will be on its way into space where they will be placed on the outside of the International Space Station (ISS) to test how they withstand the full effects of zero gravity, extreme temperatures and some of the highest levels of radiation found beyond the Earth’s atmosphere.

“One day pills might have to withstand being taken from Earth to Mars and back again to help keep astronauts healthy, so we need to know how they will be affected by one of the harshest environments known: space,” said the University of Adelaide’s Professor Volker Hessel, Research Director of the Andy Thomas Centre for Space Resources and Professor in the School of Chemical Engineering and Advanced Materials.

In the mission to the ISS U.S. National Laboratory, which is scheduled to launch on Sunday 21 February at 04.06 AM (ACDT), the pills will be placed outside the space station as part of the University of Adelaide’s program to discover how exposure to microgravity and space radiation affects the stability of pharmaceutical tablet formulations.

“Our partners Alpha Space and Space Tango are combining their space flight expertise to send 60 tablets to the International Space Station.”

Alpha Space’s Materials International Space Station Experiment (MISSE) platform located on the outside of the space station is where the tablets will be exposed to the rigours of the space environment.

“After they arrive, the ISS robotic system will install Alpha Space’s MISSE carrier containing the tablets which were preloaded on Earth before the mission,” said Mark Gittleman, President and Chief Executive Officer of Alpha Space.

“We are excited to collaborate with the University of Adelaide where access to our external platform can accelerate their ongoing space research which will benefit the astronauts who will push the boundaries of space exploration.”

The tablets will be launched from NASA’s flight facility in Virginia on Sunday on board a Northrop Grumman rocket.

“After spending six months in space, the tablets, which were made at the University of Adelaide, will return to Earth where we will test what effect the space environment has had on them,” said Professor Hessel.

“Radiation protection was incorporated into the design of the pills. By altering the interaction between the ingredients and the drug we will be able to examine how these variations affect their stability.”

Materials used in the tablets being tested, which are packaged in blister packs as they would be if available commercially, include Ibuprofen as a pharmaceutical active ingredient and vitamin C, and excipients which are found in abundance in the lunar surface such as silica, magnesium silicate (talcum) and calcium phosphate.

“We only used ingredients from materials that are only available on the Moon, and in so doing we are making the first steps towards autonomous on-board pharmaceutical manufacturing,” said Professor Hessel.

The University’s first batch of tablets, which was already sent to the ISS in partnership with Space Tango last October, is being exposed to the environment inside the space station.

Today, astronauts living in space 250 miles above the Earth’s surface have a supply of fully stocked and non-expired medicines courtesy of commercial resupply missions. However, future astronauts who endure a three-year trip to Mars may not have the same convenience. Without access to frequent resupply missions, pre-packed medicine for their journey will likely expire as most commercially available medicines have an average shelf life of two years, and sometimes less. While extending the shelf life of medicine might seem feasible, future astronauts will still be limited by both storage capacity and variety. The ability to produce drugs in space and on-demand could be the best solution to both of these challenges with added benefits to pharmaceutical companies here on Earth as well. This is why the University of Adelaide, Space Tango, and Alpha Space are working together to provide information towards this solution.

“By working together with our partners Alpha Space and Space Tango we will continue to use their internal and external platforms to further advance our space resource initiatives across interdisciplinary medicine-process technology applications,” says Professor Hessel.

NASA’s NG-15 launch, which will take off from Wallops, Virginia on Sunday 21 February 04.06 am (ACDT, Adelaide time) carrying the experiment to the ISS, can be viewed live on NASA TV.

Space research is one of the University of Adelaide’s key industry engagement priorities as set out in its strategic plan Future Making.