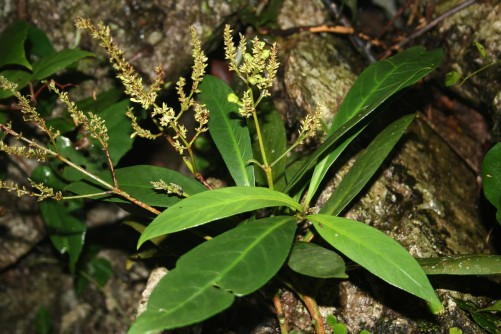 Newswise — A plant found throughout Southeast Asia traditionally used to treat arthritis and rheumatism contains a potent anti-HIV compound more powerful than the drug AZT, according to a new paper published in the Journal of Natural Compounds.

The chemical, patentiflorin A, is derived from the willow-leaved Justicia, and was identified in a screening of more than 4,500 plant extracts for their effect against the HIV virus.

The discovery is one of the results of a multi-year research partnership made up of scientists from the University of Illinois at Chicago, Hong Kong Baptist University, and the Vietnam Academy of Science and Technology working together as an International Cooperative Biodiversity Group. These groups, funded by the National Institutes of Health, National Science Foundation and the U.S. Department of Agriculture, look for natural products that may have applications in health and medicine, and also work to support sustainable use of these resources in low-income countries.

Lijun Rong, professor of microbiology and immunology in the UIC College of Medicine; Harry Fong, associate director of the World Health Organization Program for Traditional Medicine; and Doel Soejarto, professor emeritus of medicinal chemistry and pharmacognosy in the UIC College of Pharmacy, led the UIC team. Rong is an expert at identifying antiviral agents, Soejarto is a renowned plant scientist, and Fong is a well-known pharmacologist.

The willow-leaved Justicia extract had been taken from the leaves, stems and roots of plants that had been collected in Cuc Phuong National Park in Hanoi, Vietnam more than 10 years ago by Soejarto. The UIC/Hong Kong/Vietnam ICBG analyzed the extract along with thousands of others as part of their efforts to identify new drugs against HIV, tuberculosis, malaria and cancer.

Rong and his colleagues zeroed in on patentiflorin A because of its ability to inhibit an enzyme needed for HIV to incorporate its genetic code into a cell’s DNA. AZT, the first anti-HIV drug developed and marketed in 1987, and which remains the cornerstone of HIV drug cocktails today, inhibits this enzyme, called reverse transcriptase. In studies of human cells infected with the HIV virus, patentiflorin A had a much more significant inhibition effect on the enzyme.

“Patentiflorin A was able to inhibit the action of reverse transcriptase much more effectively than AZT, and was able to do this both in the earliest stages of HIV infection when the virus enters macrophage cells, and alter infection when it is present in T cells of the immune system,” said Rong.

It also was effective against known drug-resistant strains of the HIV virus, making it a very promising candidate for further development into a new HIV drug.

“Patentiflorin A represents a novel anti-HIV agent that can be added to the current anti-HIV drug cocktail regimens to increase suppression of the virus and prevention of AIDS,” Rong said.

The researchers were also able to synthesize patentiflorin A. “If we can make the drug in the lab, we don’t need to establish farms to grow and harvest the plant, which requires significant financial investment, not to mention it has an environmental impact,” Rong said.