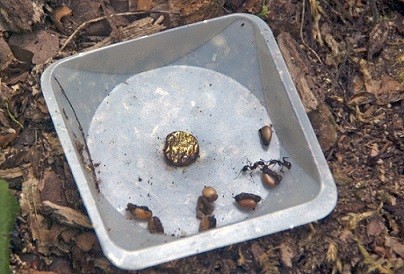 “Competition as a mechanism structuring mutualisms” by Warren and coauthors Itamar Giladi and Mark A. Bradford was published online on January 13 in the Journal of Ecology. The researchers hypothesized that the staggered timing of seed release by ant-dependent plants has been shaped by competition, through which plants with less desirable (smaller) seeds avoid competing with plants with more desirable (larger) seeds. Warren showed that ants will ignore small seeds altogether if they are placed close to large seeds.

“It is well known that plants compete for the light, water, and nutrients they need to thrive, ” said Warren. “However, we show that plants also compete for living resources such as ants to disperse seeds.” In other words, mutualist partners—members of different species whose mutual dependence benefits members of each species—are as fundamental a resource as sun and moisture.

Warren et al observed ants at four seed-bait stations by reviewing 96 hours of video footage, and scored 210 ant visits for ant behavior and species identity. “Our results show that ants clearly prefer larger seeds to smaller seeds,” said Warren. “A comprehensive analysis of ant- and non-ant dispersed plants suggests that small-seeded plants must then release their seeds very early in spring when ant foraging is unreliable to avoid competing with the larger seeds, which are released later in spring, for ant attention.” Plants that are not ant-dispersed show no restraints on when they can release small seeds.

These results suggest that mutualistic partners are as essential a resource as nonliving resources. “Ecological interactions are defined by more than either competition or mutualism,” said Warren. “It’s likely that both are involved.”