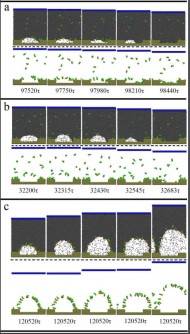 Several typical snapshots for nanobubbles losing their stability with various concentrations of surfactants and levels of interaction with substrates. In each picture, top panel shows evolution of the system with all involved particles, while in the bottom panel, solvent molecules are not shown to clarify the effect of surfactants. 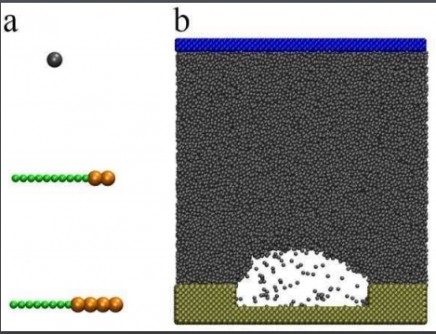 The stability of nanobubbles is well understood, but the mechanisms causing their eventual destabilization are still in question. Using molecular dynamics simulations (MDS), researchers from the Beijing University of Chemical Technology explored the effect of surfactants -- components that lower surface tension -- on the stabilization of nanobubbles. They report their findings on the surprising mechanisms of destabilization for both soluble and insoluble surfactants this week in Applied Physics Letters, from AIP Publishing.

Analyzing both soluble and insoluble surfactants, the group focused on two possible mechanisms of destabilization: contact line depinning, where the surfactant flexibility reduces the forces responsible for stabilizing the bubble shape, causing it to rupture from lack of inner surface force; and surface tension reduction, causing a liquid to vapor phase transition.

The found soluble surfactants initiated nanobubble depinning when a large amount, roughly 80 percent, of the surfactant was adsorbed by the substrate, eventually causing the nanobubbles to burst.

“However, when small concentrations of soluble surfactant were introduced it remained dissolved, and adsorption onto the substrate was insignificant, generating a negligible effect on nanobubble stability,” said Xianren Zhang at Beijing University of Chemical Technology.

Simulations with insoluble surfactants showed comparable results to soluble surfactants when interacting heavily with substrates, but a new mechanism was discovered demonstrating a liquid-to-vapor transition model of bubble rupture.

The transition is similar to how we traditionally envision bubbles popping, occurring when a surfactant significantly reduces the surface tension on the outside of the nanobubble. Nanobubbles destabilize in this fashion when a large amount of surfactant is present, but little -- around 40 percent -- surfactant-substrate interaction occurs.

These findings are critical to understanding nanobubble stability and have implications for nanobubble interaction with other molecules, including proteins and contaminants. Nanobubble applications could revolutionize aspects of modern medicine such as ultrasound techniques, expand functions in food science, and improve waste water treatment. But better characterizing basic properties like instability is essential to fully utilizing their potential in these applications.