Is a new snack coming to a theater near you? 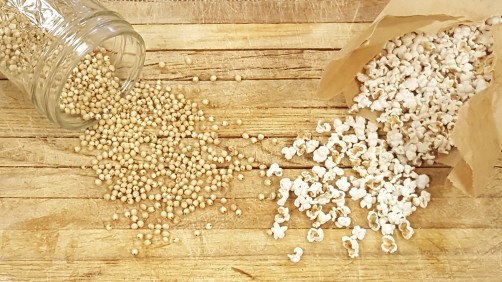 A research team member pours sorghum from the popper into the sieve to measure the amount of popped kernels. 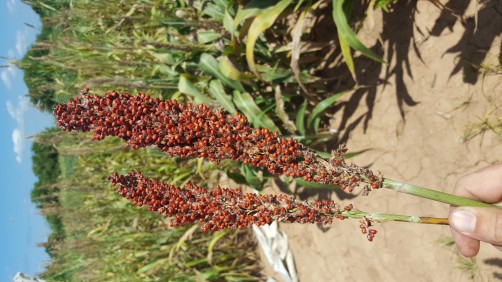 Red sorghum in the field

Newswise — Feb. 15, 2017 - Eating popcorn has long been synonymous with watching movies. But soon you might find yourself reaching for another popped snack option—popped sorghum.

Sorghum is a cereal grain that is becoming more popular in the United States because it’s gluten free and nutritious. Compared to popcorn, popped sorghum kernels are smaller in size. But they are no less tasty according to Nicholas Ace Pugh, a researcher in Bill Rooney’s laboratory in the Department of Soil and Crop Sciences at Texas A&M University. However, more needs to be known about the best sorghum for popping.

Here, popcorn has an advantage. Growers have bred popcorn specifically for its popping capacity. However, sorghum’s popping potential hadn’t previously been promoted. There is a wide variety of genotypes, or genetic lines, of sorghum, and those specific qualities still need to be pondered.

Pugh was in pursuit. To look at the genotypes available, he planted 130 different varieties of sorghum. He also wanted to know what environments are best for growing popping sorghum. So he planted all of the varieties in three different environments. Once the plants had grown and were harvested, Pugh and his team got to popping!

But how do you pop sorghum in a scientifically useful way? First, they analyzed the characteristics of each of the different varieties of sorghum and measured the hardness of the kernels. Then they counted out 500 kernels of each variety and measured the sample’s volume. Those 500 kernel samples were heated in hot air poppers.

Originally, Pugh had planned on using ordinary air poppers. “Unfortunately, these poppers are not made for sorghum: it kept flying out of the machine!” Pugh had to outfit the poppers with wire mesh to keep the sorghum inside the devices.

With seeds safely contained in the poppers, Pugh and his team heated the kernels for two minutes and 15 seconds. Just like home popcorn poppers have observed, there were sorghum kernels that refused to pop. The team counted the number of unpopped kernels, and measured the volume of the popped kernels. All of this data demonstrated the level of popping success: percent of popped kernels and the popped volume.

The findings suggests nature may have the final say. “I was pretty surprised by just how large of a role that environment and its effect on genotype played!” Pugh says. “The results essentially showed that the environment that sorghum is grown in is perhaps one of the largest factors in determining how it will pop.”

Of the different varieties, the sorghum that performed the best was RIL #65, also known as “Sorg Pop.” Sorg Pop performed consistently in all three environments.

But Pugh is not satisfied with proclaiming Sorg Pop the prizewinner just yet. “It was clear from these findings that popping is highly complex in sorghum and is likely influenced by several more traits that I didn’t get to examine.”

And what does a researcher do with 390 batches of popped sorghum? “Well, you can certainly eat it. It has a fun miniature size and the taste is delicious! Of course, I might be a bit biased,” Pugh says.

Pugh has already started working on a follow-up study, so the popping continues.