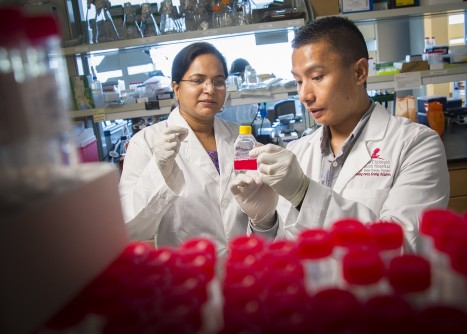 Newswise — (MEMPHIS, TENN. – February 18, 2015) Research led by St. Jude Children’s Research Hospital scientists has identified a potential target in the quest to develop a more effective treatment for leishmaniasis, a parasitic tropical disease that kills thousands and sickens more than 1 million people worldwide each year. The findings were published online in the Journal of Clinical Investigation.

Researchers showed that blocking the activity of the chemical messenger or cytokine called interleukin 18 (IL-18) protected specially bred mice from the most common form of leishmaniasis. IL-18 is produced by cells in the innate immune system, which serves as the first line of defense against infectious agents and other threats. Multi-protein complexes known as NLRP3 inflammasomes sense Leishmania and help to make IL-18.

The finding was a surprise because in previous research with a different mouse model, NLRP3 inflammasome was reported to drive the immune response that protects against leishmaniasis.

“We have uncovered a novel role for IL-18 in certain settings that has potential for being translated into more effective therapy for an infection that takes a high toll on residents, particularly children, of some of the world’s poorest countries,” said corresponding author Thirumala-Devi Kanneganti, Ph.D., a member of the St. Jude Department of Immunology.

Leishmaniasis is caused by a family of parasites transmitted through the bite of infected sandflies. The World Health Organization estimates that 1.3 million individuals worldwide, mostly in the developing world, are infected annually and 20,000 to 30,000 die. In countries where the disease is endemic, children are at greater risk of infection than adults. Prevention and treatment efforts have lagged. Leishmaniasis is classified as a neglected tropical disease by the U.S. Centers for Disease Control and Prevention.

This study focused on the Leishmania major (L. major) parasite, which is one of more than 20 different species of Leishmania and the most common cause of the disease in humans. L. major causes skin sores that sometimes take years to heal and result in scarring and disability.

In mice that are susceptible to the parasite, researchers reported that the infection led to increased production of IL-18 by white blood cells, which are part of the innate immune response.

Based on previous studies with a different mouse model of leishmaniasis, researchers expected IL-18 to promote an adaptive immune response led by a family of white blood cells called type 1 helper T (Th1) cells. Th1 cells make the cytokine interferon gamma that is associated with resistance to leishmaniasis.

But rather than prompting the adaptive immune system to launch a response likely to eliminate the infection, IL-18 did the opposite. IL-18 favored production of specialized immune cells that make the cytokine interleukin 4 (IL-4). IL-4 skewed the adaptive immune response in the parasite’s favor. IL-4 is produced by type 2 helper T cells.

“While the NLRP3 inflammasome is considered an essential component of the defense against bacterial and viral infections, little was known about its role during parasitic infections,” said first author Prajwal Gurung, Ph.D., a postdoctoral fellow in Kanneganti’s laboratory. “Our results suggest that the NLRP3 inflammasome controls susceptibility to the most common Leishmania infection by regulating the balance between the Th1 and Th2 adaptive immune response.”

The study’s other authors are Rajendra Karki, Peter Vogel and Mark Bix, all of St. Jude; Makiko Watanabe of the University of Florida, Gainesville; and Mohamed Lamkanfi of Ghent University, Ghent, Belgium.

The study was funded in part by grants (AR056296, CA163507, AI101935) from the National Institutes of Health; the European Research Council, the Fund for Scientific Research-Flanders and ALSAC.