A team of scientists spent five days collecting and dissecting fish on remote St. Lawrence Island in Alaska to study the effects of pollution from old military installations on the habitat. 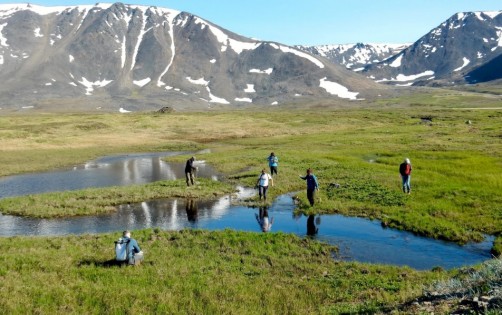 The research team on St. Lawrence Island, Alaska, collect fish to use as “model organisms” to study gene expression.

By Kerry Bennett
Office of the Vice President for Research

Newswise — St. Lawrence Island, just south of the Bering Strait in Arctic Alaska, is one of the most isolated places on the planet. Wild, mountainous and remote, the island is inhabited by 1,600 indigenous Yupik Eskimos who subsist by hunting and fishing.

Although the island’s natural environment may appear pristine, residents are exposed to high levels of persistent organic pollutants—toxic chemicals that remain in the environment for many years. Residents are concerned exposure to these pollutants may be responsible for high rates of cancer and other diseases.

Two professors with Northern Arizona University’s Center for Bioengineering Innovation (CBI) and Department of Biological Sciences—environmental physiologist Loren Buck and ecotoxicologist Frank von Hippel—are working on a long-term research project studying the link between these chemicals and the health of the island’s population.

“St. Lawrence Island is a beautiful, beautiful place,” Buck said. “It looks incredibly pristine, but the shocking part for me is the realization that there is a lot of toxicity there.”

The project was established in 2001 to investigate the community’s mounting health problems and to determine how to alleviate them. Researchers found elevated levels of organic man-made pollutants in the islanders’ blood samples, including polychlorinated biphenyls (PCBs), pesticides and flame retardants widely used in industrial and commercial applications.

Studies also showed the island was being polluted by toxic chemicals at the abandoned military bases there as well as by pollutants transported to the Arctic in the atmosphere. The chemicals accumulate throughout the food web and build up in the body fat of the marine mammals that are a mainstay of the islanders’ traditional diet, including walruses, seals and whales.

The collaborative team, which includes Buck, von Hippel, other researchers and members of the Yupik community, recently received a $3.6 million R01 renewal grant from the National Institutes of Health (NIH) for the newest phase of this interdisciplinary project, “Protecting the health of future generations: Assessing and preventing exposures to endocrine-disrupting flame retardant chemicals in two Alaska Native Arctic communities on St. Lawrence Island.”

Buck and von Hippel are two of the principal investigators on the project. They collaborate with the other PIs, Dr. David Carpenter of the University at Albany and Pam Miller, executive director of Alaska Community Action on Toxics, as well as with community leaders from St. Lawrence Island. This phase of the study will focus mainly on the island’s children, who have higher levels of exposure to flame-retardant chemicals than adults and are more vulnerable to them. Community members are concerned the chemicals may pose a neurological risk to the Yupik children.

“This study provides an opportunity to investigate the levels of flame retardants in relation to the health outcomes of Arctic indigenous children for the first time,” Buck said.

Buck and von Hippel are studying how the contaminants may be disrupting the endocrine system and gene expression of the children by analyzing blood samples and by using locally occurring fish as “model organisms.”

“We study gene expression in specific organs in the fish because their biology is very close to that of humans, and their hormone system is virtually identical to the hormone system of people,” von Hippel said. “Furthermore, fish are much easier and less expensive to study than mammals.”

“If the fish have thyroid problems, for example, we can then look at humans to see if they’re also showing potential thyroid problems,” Buck said. “That will help us find potential early biomarkers of disease even before humans are manifesting signs of the disease. We use genetic, physiological, endocrine and other biological markers to detect exposure to these toxicants and the diseases they may be causing.”

This project follows what’s known as a “community-based participatory research” (CBPR) approach, which means it is conducted as an equal partnership between academically trained experts and members of the community and is designed to produce tangible results of benefit to the community.

“This project is only possible because of the strong community support we have,” von Hippel said.

In addition to generating scientific findings, a key goal of the project is to empower members of the community with the knowledge and tools they need to address important health disparities. Investigators provide a variety of workshops, webinars, community forums, environmental health fairs and related educational opportunities. The educational efforts are showing positive results—some of the participants have been taking on projects to improve the health of their communities themselves.

Investigators also have worked to educate the islanders about their findings, enabling the Yupik to represent themselves at hearings held in Juneau, Alaska’s capital; in Washington, D.C.; and at the Stockholm Convention in Switzerland to lobby for phasing out these chemicals.

Ultimately, the scientists hope the results of their research will inform public health interventions and improve health outcomes, enabling early detection and intervention to mitigate future exposure of the island’s children to toxic chemicals.

Buck, von Hippel and their team, who were at that time with the University of Alaska, Anchorage, were interviewed about the project for a New York Times article and video in 2015.