Pulling the Tablecloth Out From Under Essential Metabolism 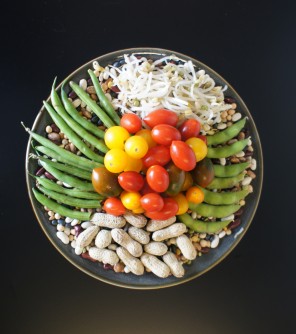 For the first time scientists have caught the cell machinery that makes a vital molecule in the process of evolving. A key enzyme plants use to make tyrosine, an amino acid necessary for life, was thought to be conserved across the plant kingdom but the scientists found it has mutated to another form in legumes. In cherry tomatoes the canonical form of the enzyme dominates, peanuts can switch hit and some strains of soybeans (lumpy beans to the right) have lost the canonical form.

Newswise — Because plants can't get up and run away, they've had to be clever instead. They are the chemists of the living world, producing hundreds of thousands of small molecules that they use as sunscreens, to poison plant eaters, to scent the air, to color flowers, and for much other secret vegetative business.

Secondary metabolism is thought to have evolved to help plant ancestors deal with living on dry land rather than the more hospitable oceans. The idea is that the genes for enzymes in the molecular assembly lines of primary metabolism were duplicated. The duplicates were more tolerant of mutations that might have destabilized the primary pathways because the originals were still on the job. With evolutionary constraints thus relaxed, synthetic machinery was able to accumulate enough mutations to do new chemistry.

Primary metabolism, however, is widely conserved, meaning that it remains unchanged across many different groups of organisms because it has been fine tuned to operate correctly and efficiently and because its products are necessary for life. Or so the textbooks say.

But now a collaborative team of scientists has caught primary metabolism in the act of evolving.  In a comprehensive study of a primary-metabolism assembly line in plants, they discovered a key enzyme evolving from a canonical form possessed by most plants, through noncanonical forms in tomatoes, to a switch-hitting form found in peanuts, and finally committing to the novel form in some strains of soybeans.

This feat, comparable to pulling the tablecloth out from under the dishes without any breaking any of them, is described in the June 26 issue of Nature Chemical Biology. It is the work of a collaboration between the Maeda lab at the University of Wisconsin, which has a longstanding interest in this biochemical pathway, and the Jez lab at Washington University in St. Louis, which crystallized the soybean enzyme to reveal how nature changed how the protein works .

"The work captures plants in the process of building a pathway that links the primary to the secondary metabolism," said Joseph Jez, the Howard Hughes Medical Institute Professor in the Department of Biology in Arts & Sciences. "We're finally seeing how evolution creates the machinery to make new molecules."

It may also have practical importance because the old and the new pathways make the amino  acid tyrosine, which is a precursor for many secondary metabolites with biological and pharmaceutical activity— everything from vitamin E to opioids. But the old pathway makes only tiny amounts of these compounds, in part because they must compete for carbon atoms with the greedy process for making lignin, the tough polymers that let plants stand tall.

The discovery of the new pathway for making tyrosine is much less constrained than the old one. This raises the possibility that carbon flow could be directed away from lignin, increasing the yields of drugs or nutrients to levels that would allow them to be produced in commercial quantities.

A tale of two enzymes

Tyrosine is made on an assembly line called the shikimate pathway, a seven-step metabolic pathway that plants use to make the three amino acids that have aromatic rings. Animals (including people) shed the ability to erect this assembly line deep in the evolutionary past.  Because we cannot make these amino acids on our own and they are essential for life, we must instead obtain them by eating plants or fungi.

That aromatic ring is important, said Jez, because it is a distinctive structure that can absorb light or energy. So the aromatic amino acids also are the precursors for many secondary metabolites that capture light, transfer electrons, or color flowers. Moreover, the aromatic amino acids are also precursors for chemicals that poison other plants or plant predators and attract pollinators. Many medicinal drugs include an aromatic ring, Jez commented.

In most plants the shikimate pathway is in the chloroplast, the organelle that does the work of converting the energy of sunlight to energy stored in carbon bonds. Once made, however, tyrosine can be exported out of the cytosol for incorporation or conversion into other compounds.

In the last step of one branch of the pathway an enzyme called arogenate dehydrogenase (ADH), catalyzes a reaction that makes the compound arogenate into tyrosine. The ADH enzyme is considered "regulatory" because it is a bottleneck in tyrosine production. It must compete for the arogenate substrate with the branch of the shikimate pathway that makes a different aromatic amino acid and it is strongly inhibited by the buildup of tyrosine

ADH activity is common in  plants, but in the course of studying the shikimate pathway the Maeda lab discovered that the DNA sequences coding for ADH in some flowering plants were significantly different from those in most plants. They called the enzymes produced by these sequences noncanonical ADH. Then, in 2014, they reported that some legumes also make tyrosine with a different enzyme, called prephenate dehydrogenase (PDH).

Why are there two different assembly lines for tyrosine? The scientists believe the PDH enzyme evolved via two gene duplication events and the accumulation of mutations in the "extra" copies of the gene. The first event gave rise to nonstandard ADHs in some flowering plants and the second to PDH in a subset of legumes. But why did this happen?

That's not a question the scientists can answer yet except in general terms, Jez said. What sticks out, however, is that the more recently evolved metabolic pathway is not tightly regulated and could potentially churn out product at a hectic pace. Perhaps the legumes were in dire need of secondary metabolites for some reason. It is certainly suspicious that legumes have an ecology quite different from that of other plants, since they live symbiotically with nitrogen-fixing bacteria.

By this point the scientists knew that the novel enzyme, PDH, bound a different substrate than the original enzyme, ADH. They also knew that PDH, unlike ADH, did not bind tyrosine itself. But what changes in structure led to these differences in chemical activity?

To find out, Craig Schenck, a graduate student in the Maeda lab, compared the gene sequences for the ADH or PDH enzyme in many different plants, carefully chosen to be on the boundaries of the switchover from one enzyme to the other. But they encountered a problem. There were enough differences in the DNA that it was difficult to see what was relevant, Jez said.

Encountering Maeda at a conference, Jez offered to try crystallizing the novel enzymes so that their structure could be reconstructed from X-ray images. His graduate student Cynthia Holland was able to crystallize the soybean PDH and produce detailed images of its three-dimensional shape.

"Once you looked at the structure you could see that there were only two differences from the typical ADH found in most plants and only one of the differences actually changed things," Jez said. Stunningly that difference was a single amino acid in the active site on the enzyme. At that spot the  asparagine had replaced aspartic acid.

Schenck double-checked this structural insight by flipping that amino acid in mutant forms of the enzyme. The ADH mutant turned out to have PDH activity, and the PDH mutant had ADH activity, just as the team had suspected.

"That one difference changes the enzyme's preferred substrate and its ability to be inhibited by tyrosine feedback," Jez said. "And if you look at it, it's literally the difference between a nitrogen atom or an oxygen atom. In these proteins, which are made up of nearly three hundred amino acids or forty-two hundred atoms, one atom makes all the difference. That's just kind of cool."

"When we want a plant to make a new molecule," Jez said, "we drop in a gene and hope it integrates with existing pathways. We still don't know how to readily connect the wiring between what we drop in and what is already there. So it is interesting to see how nature contrived to connect the wiring and change things without breaking them."