Putting the ‘Nuclear Coffin’ in Perspective

Marine chemist weighs in on leaking radioactive dome in the Pacific 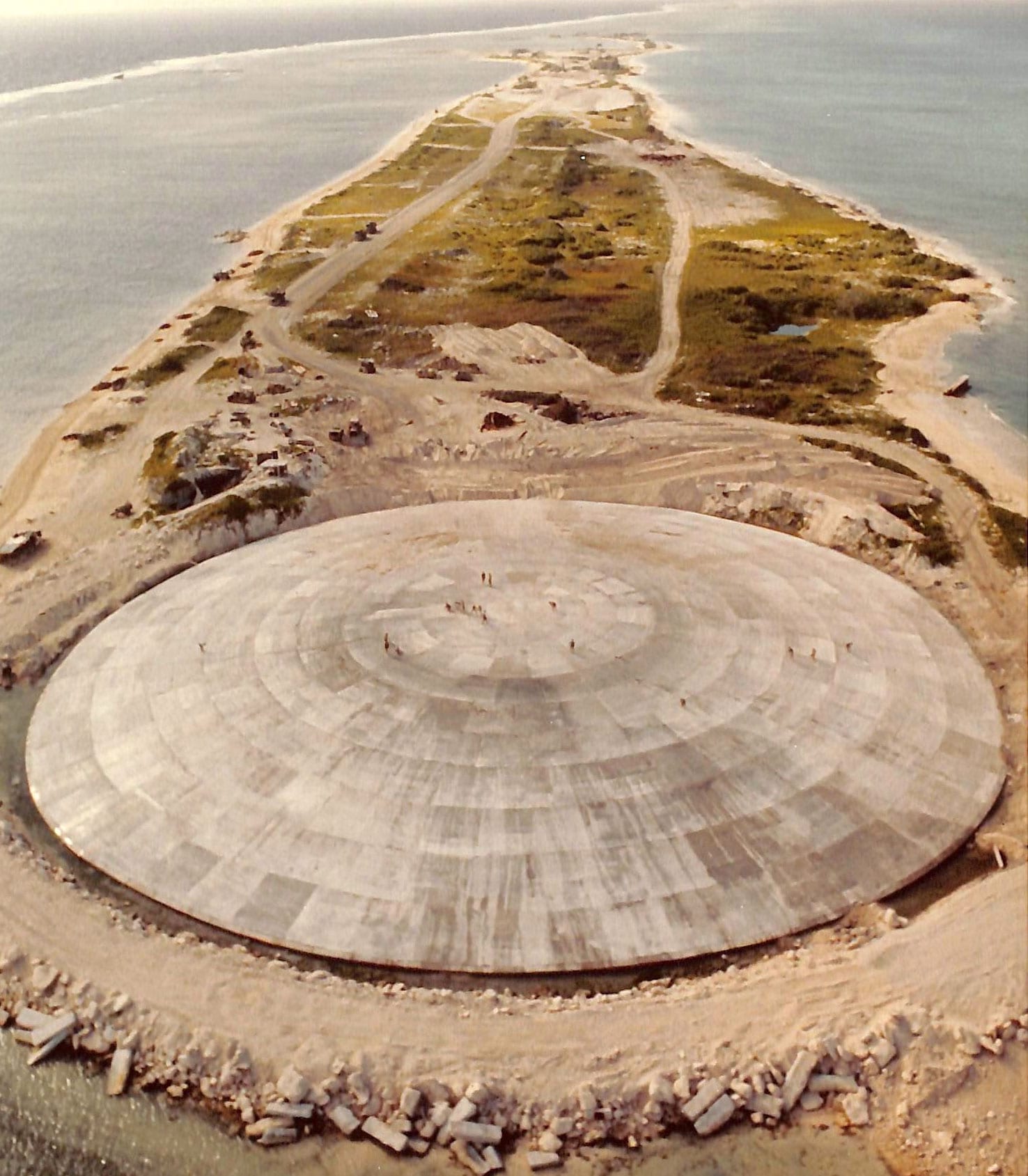 Runit Dome sits roughly 25 feet above sea level on low-lying Runit Island, making it vulnerable to inundation from rising seas. People on top of the thick concrete cap, which measures nearly 400 feet in diameter, look like ants in this aerial view. 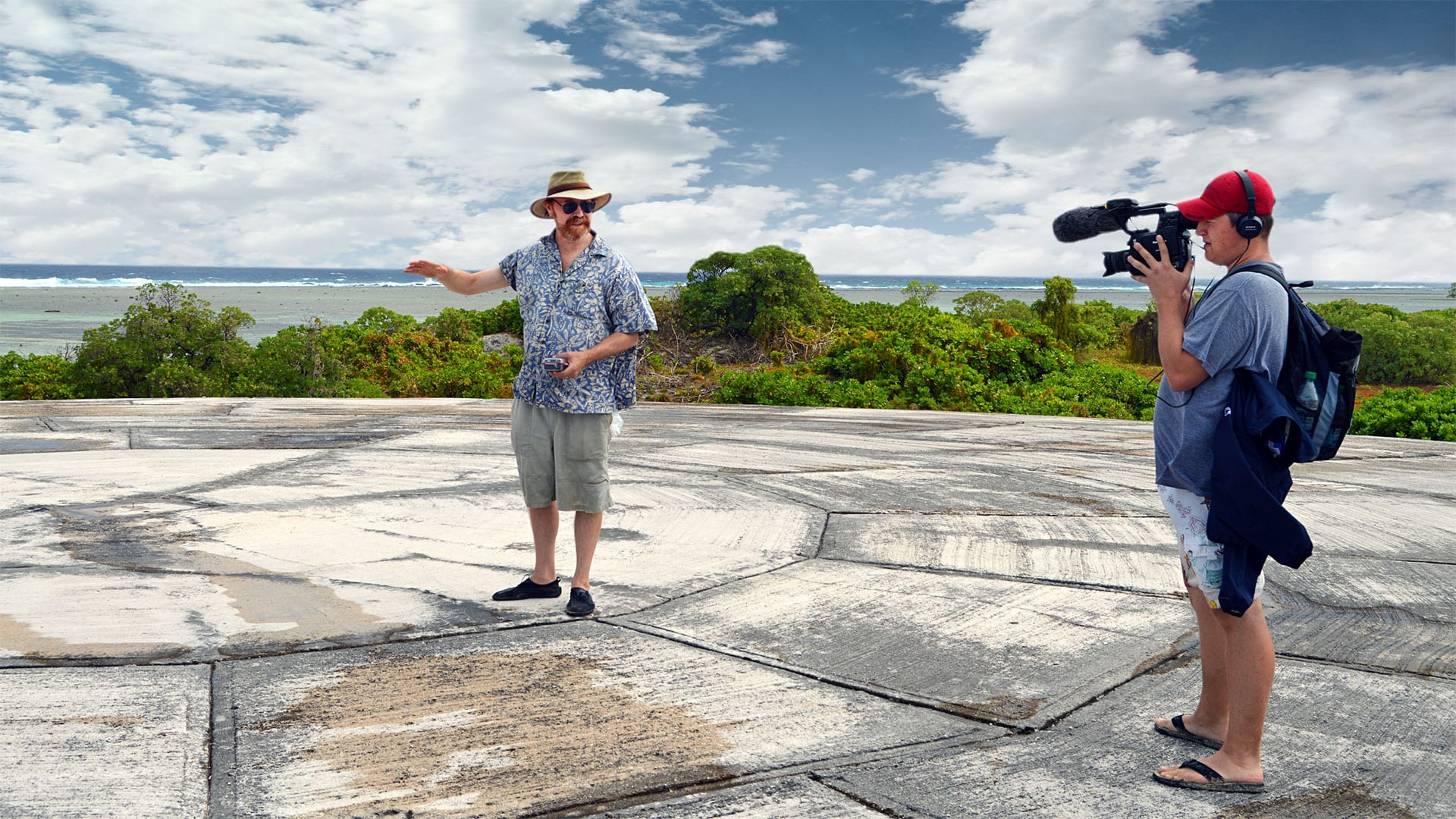 Newswise — There has been a flurry of headlines this summer about a "nuclear coffin" leaking radioactive waste into the Pacific Ocean. The coffin—a bomb crater filled with radioactive soil on a tiny island in the Marshall Islands—sits under a 350-foot-wide concrete lid known as Runit Dome. It’s arguably the region’s most visible scar from Operation Crossroads, a series of U.S. nuclear weapons tests that took place off Bikini and Enewetak Atolls between 1946 and 1958.

The concerns aren’t unfounded—the area has been a hotspot for lingering radioactivity for more than half a century. But according to Ken Buesseler, a world-renowned expert in marine radioactivity at Woods Hole Oceanographic Institution (WHOI), the concerns are nothing new.

“We’ve known for years that the dome is leaking,” he said. “When we were there doing fieldwork in 2015, we sampled groundwater and could see there was an exchange between the lagoon water and material under the dome. But it was clear that only a small amount of radioactivity was actually leaking into the lagoon.”

To put “a small amount of radioactivity” into perspective, Buesseler says the amount of plutonium under the dome is just one percent of the total amount buried in the surrounding lagoon sediments, which is less than 0.1% of the plutonium released during the weapons testing more than 60 years ago. These amounts fall below contamination levels for U.S. and international water-quality standards. More generally, radiation levels for the islands of Enewetak Atoll, according to a 2016 study from researchers at Columbia University, are even lower than those in New York City’s Central Park due to the high background radioactivity of granite rocks in the park.

“The dome is a significant visible scar on the landscape, but it’s a relatively small source of radioactivity,” said Buesseler, who had no hesitancy swimming in the azure waters off Runit Island during the 2015 field study.

However, he says the area is generally still of great concern and needs to be closely monitored. A more recent study from Columbia suggests that radiation levels vary significantly between islands, and higher levels have been measured on nearby Bikini and Rongelap atolls. Rongelap, in particular, had received considerable fallout from the 1954 Bravo test, resulting in subsequent decades of local contamination and radiation poisoning throughout the atoll.

Runit Dome sits roughly 25 feet above sea level, making it vulnerable to inundation from rising seas.Runit Dome, which is located on Runit Island—one of 40 islands that make up Enewetak Atoll—was built in 1977 as a temporary measure to contain some of the radioactive material left behind from the bomb explosions, some of which were one thousand times more powerful than those that destroyed Hiroshima and Nagasaki. The U.S. Army bulldozed more than 100,000 cubic yards of contaminated soil and debris into a bomb crater and capped it with hundreds of 18-inch-thick concrete slabs. From a Google Earth perspective, the massive dome looks like something out of science fiction, and completely out of place against the expanse of paradise around it.

While the dome has helped contain the waste and residual contamination levels on Enewetak, there's no telling what the future holds.

“As long as the plutonium stays put under the dome, it won’t be a large new source of radiation to the Pacific Ocean,” he said. “But a lot depends on future sea-level rise and how things like storms and seasonal high tides affect the flow of water in and out of the dome. It’s a small source right now, but we need to monitor it more regularly to understand what’s happening, and get the data directly to the affected communities in the region."

Caption: Runit Dome sits roughly 25 feet above sea level on low-lying Runit Island, making it vulnerable to inundation from rising seas. People on top of the thick concrete cap, which measures nearly 400 feet in diameter, look like ants in this aerial view.