California Department of Water Resources officials conduct a snow survey in the Sierra Nevada. The water supply held in the mountain snowpack and elsewhere in California could be reduced by climate change, according to a report by the California Climate Action Team. 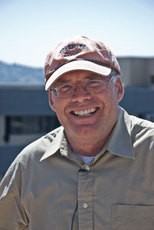 Newswise — A biennial report released today by a team of experts that advises California's governor suggests that climate changes are poised to affect virtually every sector of the state's economy and most of its ecosystems. Significant impacts will likely occur under even moderate scenarios of global greenhouse emissions and associated climate change, but without action, severe and costly climate change impacts are possible across the state.

A broad collaboration of scientists, mostly from state academic and government agencies, provided a large set of technical papers that form the underpinnings for much of the CAT report. Assessments include the impacts of sea level rise, higher temperatures, increased wildfires, decreased water supplies, increased energy demand, among others, on the state's environment, industries and economic prosperity. Each of the papers has undergone peer review by technical experts in private, public and governmental entities.

Impacts of climate change to California's coast, agriculture, forest and communities have been known and studied for years; however the studies that support the CAT report suggest that actual greenhouse gas emissions are outstripping 2006 projections. Of particular interest are the several papers focusing on the impacts of a rise in sea levels to coastal communities and increased potential of wildfires to residential areas.

"The Climate Action Team plays an essential role in the implementation of the state's climate initiatives and is guided by these important technical studies to ensure policy decisions are based on sound science," said Linda Adams, Secretary for Environmental Protection and Chair of the state's CAT. "Any delay in fighting global warming would be detrimental to our economic stability " costing us billions of dollars and dampening the state's most important economic sectors. Taking immediate action on climate change is essential to slow the projected rate of warming. We also need to make smarter decisions in order to anticipate and adapt to the changes."

"This report represents one of the most valuable products that the environmental research community can deliver to the people of California," said Scripps Director Tony Haymet. "Institutionalizing a process that provides an ongoing, biennial assessment of the state's climate is a great credit to the farsightedness of California government and to the leadership of Dan and the rest of the steering team."

The CAT report, now available for public comment, synthesizes 37 research papers written by world-class scientists from prominent universities and research institutions. Three additional papers are still undergoing peer reviews and will be considered for inclusion in the final report later this summer. The reports were funded, in part, through the California Energy Commission's Public Interest Energy Research (PIER) program and represent the most comprehensive and detailed scientific information to date on climate change impacts to California.

"The assessment finds an even stronger set of vulnerabilities to climate change than we found two years ago," said Cayan, a climate researcher for the U.S. Geological Survey in addition to Scripps. "This underscores the need for careful, continued monitoring of the natural and societal environment in California and heightens the imperative to sharpen our modeling tools to provide regional projections that can be evaluated by state policymakers and other decision-makers."

The research papers also serve as the scientific foundation on which the state is developing its first Climate Adaptation Strategy (CAS). A chapter of the CAT report previews this work. Understanding that adaptation and mitigation must complement each other in the fight against climate change, Gov. Schwarzenegger signed a directive in November 2008 tasking the Natural Resources Agency with developing a CAS. When complete, this comprehensive effort will improve coordination within state government and more effectively plan for climate impacts from sea level rise, increased temperatures, shifting precipitation and extreme weather events.

"Delay in preparing for climate change is not an option," said Energy Commission Vice Chair James Boyd. "Based on the best and most current science, these new scenarios used in the CAT report will help California plan and manage against the potential impacts of a changing climate."

"¢ Water Supply Impacts: A group of researchers at UC Davis investigated the effect of potential climate-induced reductions in water supply to the agricultural sector. One of their findings is that the lack of water would result in reductions in irrigated crop area contributing to the loss of agricultural lands in the Central Valley. Under the particular climate change scenario investigated, the researchers also found that changes in yields (mostly negative) and changes in water availability could result in gross revenues losses of up to $3 billion by year 2050. (Source: Effect of Climate Change on Field Crop Production in the Central Valley of California; California Perennial Crops in a Changing Climate; Estimating the Economic Impacts of Agricultural Yield Related Changes for California)

"¢ Wildfire Risks: Scientists at UC Merced and Pardee RAND Graduate School performed a novel analysis of wildfire risk in California. They estimated that wildfire risk would increase throughout the end of the century. Average annual monetary impacts due to home loss may plausibly to be on the order of 2 billion dollars per year by mid-century and up to $14 billion per year by the end of the century. (Source: Climate Change, Growth, and California Wildfire; Potential Effects of Climate Change on Residential Wildfire Risk in California)

"¢ Ecosystem Impacts: The Nature Conservancy's research has determined that California's historic ranching culture, and a source of local, grass-fed beef, is at significant risk from climate change. (Source: The Impact of Climate Change on California's Ecosystem Services)

To view each of the draft papers and a list of authors, visit http://www.climatechange.ca.gov/publications/cat/.

About the California Climate Action Team (CAT):The CAT plays an essential role in the state's efforts to combat climate change. The CAT supports the implementation of the Scoping Plan " the state's roadmap to reach the greenhouse gas reduction goals required in the Global Warming Solutions Act of 2006, or AB 32. This plan calls for ambitious but achievable reduction in California's carbon footprint " toward a clean energy future. The CAT also supports the development of a statewide adaptation strategy to help anticipate and respond to the potential environmental and economic impacts of climate change.