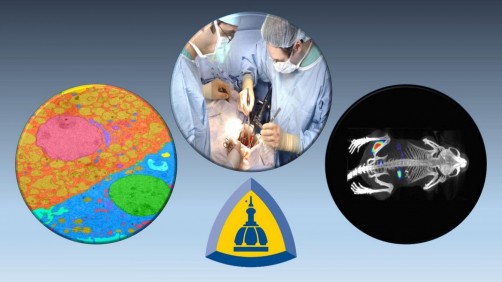 During the COVID-19 pandemic, Johns Hopkins Medicine Media Relations is focused on disseminating current, accurate and useful information to the public via the media. As part of that effort, we are distributing our “COVID-19 Tip Sheet: Story Ideas from Johns Hopkins” every other Wednesday.

We also want you to continue having access to the latest Johns Hopkins Medicine research achievements and clinical advances, so we issue a second tip sheet covering topics not related to COVID-19 or the SARS-CoV-2 virus. “Research News Tip Sheet: Story Ideas from Johns Hopkins Medicine” alternates Wednesdays with the COVID-19 Tip Sheet.

Stories in this tip sheet associated with journal publications provide a link to the paper. Interviews may be arranged by contacting the media representatives listed.

Studying mice modeling a human genetic disease that causes irregular heartbeats and can lead to sudden death, Johns Hopkins Medicine researchers have shown that emotional stress seems to promote symptoms of the disease and worsens its progression. The researchers say in their study, published Nov. 24, 2020, in the Journal of Clinical Medicine, that physicians and patients would be wise to focus together on good mental health — in addition to traditional exercise avoidance — to keep patients healthy and avoid triggering symptoms.

“There’s much evidence that our body and mind are connected so that our psychological states can change the course of disease,” says Jacopo Agrimi, Ph.D., a research fellow in the laboratory of Nazareno Paolocci, M.D., Ph.D., associate professor of medicine at the Johns Hopkins University School of Medicine. “Prolonged stress may be like putting fuel on the fire in someone with a chronic disease. So, we need to ensure that we are taking patients’ quality of life and psychological wellness into account when managing their disease.”

“Patients often reported that when they heard their defibrillator charging — which is needed to shock their heart beat back into normal rhythm when disrupted — they would panic due to past experiences resulting from the pain and discomfort of a defibrillator discharge,” says Stephen Chelko, Ph.D., an adjunct assistant professor of medicine at the Johns Hopkins University School of Medicine, as well as an assistant professor of biomedical sciences at Florida State University. “As a result, many people also reported waking up after the shock, hearing the defibrillator recharge and become panicked again, thus creating a viscous cycle.”

These patient stories led Chelko and Agrimi to survey patients with these genetic heart diseases about their stress levels during annual clinical follow-ups. They found that those with higher levels of perceived psychosocial stress showed a strong correlation with clinical symptoms as measured by cardiac magnetic resonance imaging or electrocardiogram.

With this knowledge, the researchers then took mice with the second most common genetic mutation for arrhythmogenic cardiomyopathy and put half of the group in stressful situations by exposing them to large, aggressive and bullying mice for weeks.

“Genetic heart disease is stressful enough without adding psychological stress, with athletes having to give up exercise and participation in sports when they are diagnosed,” says Chelko.  “We need physicians to help patients navigate the disease and treat the whole condition, including the mental wellness aspect.”

Approximately 2%–3% of Americans are allergic to peanuts. Previous research studies have suggested that introduction of the peanut in the first year of life to infants highly likely to develop a peanut allergy reduces that risk by approximately 80%. However, the best method to safely do this is unclear. Now, a Johns Hopkins Medicine research team has conducted a study that shows which babies are most at risk for peanut allergy and which tests are best for diagnosing them.

The team’s findings were reported in two papers in the Jan. 19, 2021, issue of the Journal of Allergy and Clinical Immunology. One paper identifies the likelihood of  babies developing a peanut allergy, finding that older infants and ones with moderate-to-severe eczema are most at risk. The other paper compares diagnostic tests for detecting peanut allergy.

“Early introduction of peanut is important to prevent peanut allergy,” says Corinne Keet, M.D., Ph.D., associate professor of pediatrics at the Johns Hopkins University School of Medicine. “Current recommendations are that infants with severe eczema be exposed to peanuts early in the first year of life, but also that they get testing before introducing to make sure that they are not already allergic.”

“We wanted to know what the real risk for peanut allergy was in this group, and in other potential risk groups, and what tests would be best to use for screening,” she explains.

Researchers enrolled 321 children, ages 4 months to 11 months, who had at least one of the following risk factors: a family history of peanut allergy, moderate or severe eczema, or another food allergy other than peanut. The average age of the infants was 7 months and 58% were males. As for racial and ethnic demographics, 74% were identified as white, 8% as Black, 7% as Asian and 12% as multiracial or another racial background. Of the 321, 195 had eczema, 201 had a sibling or parent with a peanut allergy and 59 had a personal history of a food allergy other than peanut. Infants who were enrolled had a skin prick test and blood testing for peanut allergy, and were fed peanuts under observation.

The researchers found that 18% of the infants with moderate to severe eczema were allergic before introducing peanut. They found that risk increased with the severity of eczema, and also increased with each month between 4 months and 11 months of age.

This, say the researchers, suggests that introducing infants with severe eczema to peanuts before they reach the age of 6 months is necessary to effectively prevent the allergy. In contrast, they found that only 1% of the infants who had siblings or parents with a peanut allergy but who did not have eczema had peanut allergy when evaluated. Therefore, the researchers suggest that these infants do not need testing before starting to eat peanut products.

When comparing tests to predict the risk for developing a peanut allergy, the researchers found that the standard tests for peanut allergy — the peanut-specific IgE (looking for antibodies formed in response to the entire peanut) and the peanut skin prick test — had high false positive rates. A more recent test that detects IgE specific to one component of the peanut called Ara h 2, rather than the whole peanut, provided a more accurate diagnosis. Current guidelines for diagnosing peanut allergies in infants may need to be modified to reflect these findings, the researchers say.

The researchers conclude that parents of infants with significant eczema should discuss peanut introduction with their pediatricians, with the goal of getting the child exposed to peanut-containing foods before 6 months of age.

Ongoing research by the Johns Hopkins Medicine team involves finding ways to deal with peanut allergies already developed in children, including treatments such as medications and immunotherapy. Clinical trials are planned, including one that will study children with multiple food allergies in order to test methods for treating the allergies all at once.

Keet is available for interviews.

When Chelsea Presock and David White learned they were expecting, they couldn’t have been happier. Halfway into the pregnancy, however, they received shocking news: their little bundle of joy had a heart defect. They were referred to Johns Hopkins Children’s Center (JHCC), and their unborn baby girl was diagnosed with a rare congenital heart abnormality called tetralogy of Fallot (TOF), as well as an absent pulmonary valve (the valve that keeps deoxygenated blood on its way to the lungs from backflowing into the heart).

A combination of four heart defects that can lead to lack of oxygen in the blood and reduced blood flow to the lungs, TOF can cause blue baby syndrome, a condition in which a baby’s skin can turn blue, often at birth. However, with her absent pulmonary valve, Presock and White’s unborn baby was experiencing a compression of the airways that could lead to insufficient levels of oxygen for survival. Fewer than 1% of babies with congenital heart disease have the same diagnosis.

In the early morning hours of Nov. 21, 2019, Presock went into labor. She and White made the three-hour drive from their home on Deal Island on Maryland’s Eastern Shore  to JHCC to ensure their baby received the critical care she needed. Their daughter, Navy, was welcomed into the world later that same day. When she was born, her lips and feet were blue, along with some of her fingers.

“We didn’t know the seriousness of the situation until they rushed me to cut the umbilical cord,” White says.

Navy was soon taken to the pediatric cardiac intensive care unit and placed on extracorporeal membrane oxygenation (ECMO), a system that provides heart-lung bypass support outside the baby’s body.

“I’ve only had a moment with this child and thinking about the ‘what if’ of ‘will I have to bury this child?’ That was definitely the scariest,” Presock recalls.

Navy remained on ECMO for four days after she was born and suffered a mild stroke, which can be a complication from the bypass support system. “It’s overwhelming to see all of the lines, the beeping and the medicine, but then you see all this care around her and it makes up for it,” Presock says.

After she was removed from ECMO, Navy did well at first but soon she began to face other serious health concerns not related to her heart condition. She developed reflux and was unable to keep food down. She was diagnosed with necrotizing enterocolitis (NEC), a bacterial inflammation that can ultimately destroy the wall of the intestines. Navy was placed on intravenous antibiotics to fight the NEC and underwent abdominal surgery to treat her reflux so that she could eat.

Separate from these problems, Navy also had difficulty breathing. Lung scans showed that one of the lobes of her lungs was larger than the other. Doctors at JHCC performed a lobectomy, taking an enlarged lobe off her right lung.

Little Navy’s journey into the world was profoundly challenging, and she remained in the hospital for two and a half months. Finally, she healed enough to go home and get bigger and stronger to prepare for eventual heart surgery. During this time, Navy also was routinely followed by JHCC doctors, including Bret Mettler, M.D., director of pediatric cardiac surgery and co-director of the Blalock-Taussig-Thomas Pediatric and Congenital Heart Center at JHCC.

Eight months later, in September 2020, Navy had open-heart surgery at JHCC to fix her TOF condition and absent pulmonary valve by closing the hole in her heart, moving her pulmonary arteries and making them smaller. The eight-hour operation was successful, and 10 days later, Navy left the hospital.

“Navy was a profoundly sick baby who faced many challenges at such a young age because of her unique heart condition and so many other serious health concerns,” Mettler says. “She has come through everything amazingly well, and will be able to live a healthy life.”

JHCC doctors continue to follow Navy, who is now 14 months old, because she could need another heart operation later in life. Her parents say that she’s thriving, adding that Navy is sassy and loves peanut butter and jelly.

“I want her to be healthy and happy and have a full childhood,” White says.

“Navy would not be here without Johns Hopkins Children’s Center,” Presock says. “The reason God put surgeons here is for people like Navy to be fixed.”

Presock, White and Mettler are available for media interviews.

February is American Heart Month, a time to raise awareness for conditions affecting the heart, for both adults and children.