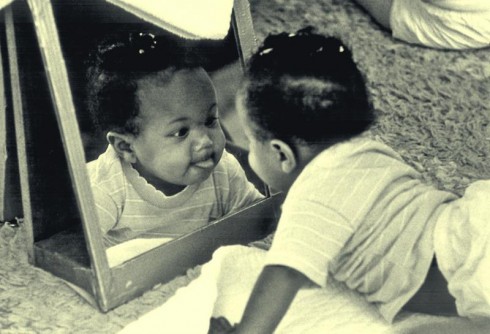 A participant in the ground-breaking Abecedarian Project plays with a mirror in the early 1970s. The study participants are now in their early 40s. Virginia Tech Carilion Research Institute scientists released new results this week that show early education provides long-term benefits. 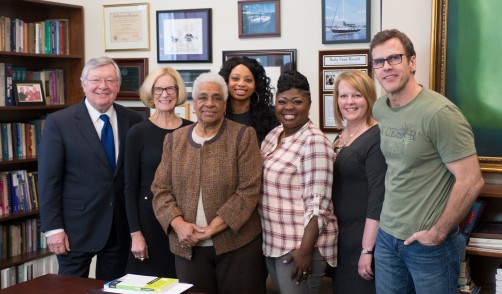 Abecedarian Project study participants recently met with Virginia Tech Carilion Research Institute scientists to discuss the study and the role of early education and care during the first five years of their lives. From left to right: Craig Ramey, the original Abecedarian Project leader who also led this follow-up study; Sharon Ramey, a project contributor since 1987; Carrie Bynum, an original assistant in the study who has continued to keep contact with participants; Latesha Foushee, a study participant; Catina Goldston, a study participant; Libbie Sonnier-Netto, a graduate student who conducts interviews with the participants; and Read Montague, who oversees the MRI data collection of participants.

Newswise — Children who are given high-quality education at an early age – starting at six weeks old and continuing through their first five years of life – are more likely to be employed full-time and have better relationships with their parents as adults, according to new results from a longitudinal study now entering its fifth decade.

Virginia Tech Carilion Research Institute scientists will present the research results at the biennial meeting of the Society for Research in Child Development at noon Central Daylight time Friday, April 7, in Austin, Texas. More than 6,000 child development professionals and other researchers are expected to connect and exchange ideas at the conference.

The study follows 96 children who have continuously participated in the Abecedarian Project, an early education program for at-risk infants and children that started in Chapel Hill, North Carolina, in 1971. The National Institutes of Health funded the original study.

“The most recent findings from the Abecedarian Project are about the quality of life, tied to what the children experienced in the first five years of life,” said Craig Ramey, a professor and distinguished research scholar of human development at the Virginia Tech Carilion Research Institute.

Ramey spearheaded the Abecedarian Project over the past 45 years and led the team that produced the new follow-up report. “We have demonstrated that when we provide vulnerable children and families with really high quality services – educationally, medically, socially – we have impacts of a large and practical magnitude all the way up to middle age,” said Ramey, who also serves as a chief science officer of Roanoke, Virginia. Both the control group and treatment group received health care, nutrition, and family support through social services; however, the treatment group also received five years of early care and education.

According to Ramey, high-quality education all day for five days a week, and for 50 weeks a year, beginning at six weeks of age and continuing until the child starts kindergarten, makes a lifetime of difference.

“And in our early education program, the most important thing is the quality of interaction between the teachers and the children,” Ramey said, pointing to the teachers’ abilities to tailor educational activities to a child’s specific needs, in a fun and natural way, as a critical element of the study’s results. “It’s pretty clear that’s what the magic ingredient is.”

The quality of natural teaching – via social interaction between the teacher and child – is highly important, especially in infancy, according to Ramey. This includes such things as the conversational aspect of language and the focus on interactive reading as enjoyable, rather than a chore.

“The data show that children who received the educational treatment are successful socially, especially in a familial setting, as indicated by their close relationships with their mothers and fathers in middle age,” said Libbie Sonnier-Netto, a doctoral student in human development at Virginia Tech’s College of Liberal Arts and Human Sciences, who conducted the follow-up interviews for this study. Sonnier-Netto also noted that individuals in the educational group are more likely to be employed full-time, with more assets, such as owning a car, a home, and having a savings account.

According to Ramey, the connection between the results is obvious. Ramey and his team have followed-up with 78 of the 96 participants so far, with more interviews and physical check-ups planned for most of the remaining participants. Of the 96 participants, only one has declined to participate. It’s an unusually high retention rate for a study spanning so many decades.

“What we’ve discovered is that if you treat people well, they thrive and they, in turn, give back,” Ramey said. “Part of our task is to make what we now know to be so important – high-quality, early childhood education and care – widely available to all who need it in this country.”

Sharon Ramey, a professor and distinguished research scholar at the Virginia Tech Carilion Research Institute, has contributed to the Abecedarian research and analysis since 1987. She co-wrote the book on the Abecedarian approach with Ramey and Joseph Sparling, who helped plan the original early childhood curriculum. Beyond the familial bond and employment status, Sharon Ramey says the researchers are seeing another trend among the treatment group participants.

“We also discovered that individuals who received early high-quality care and education also have a keen sense of social equality – and make decisions that balance the equation between those who ‘have’ and those who ‘have much less,’” said Sharon Ramey, who is also a chief science officer of Roanoke, Virginia.

The researchers expect to continue analyzing the dataset about the effects of early care and education on the children as they progress through middle age.