6-May-2019 1:05 PM EDT, by University of Maryland School of Medicine
favorite_border 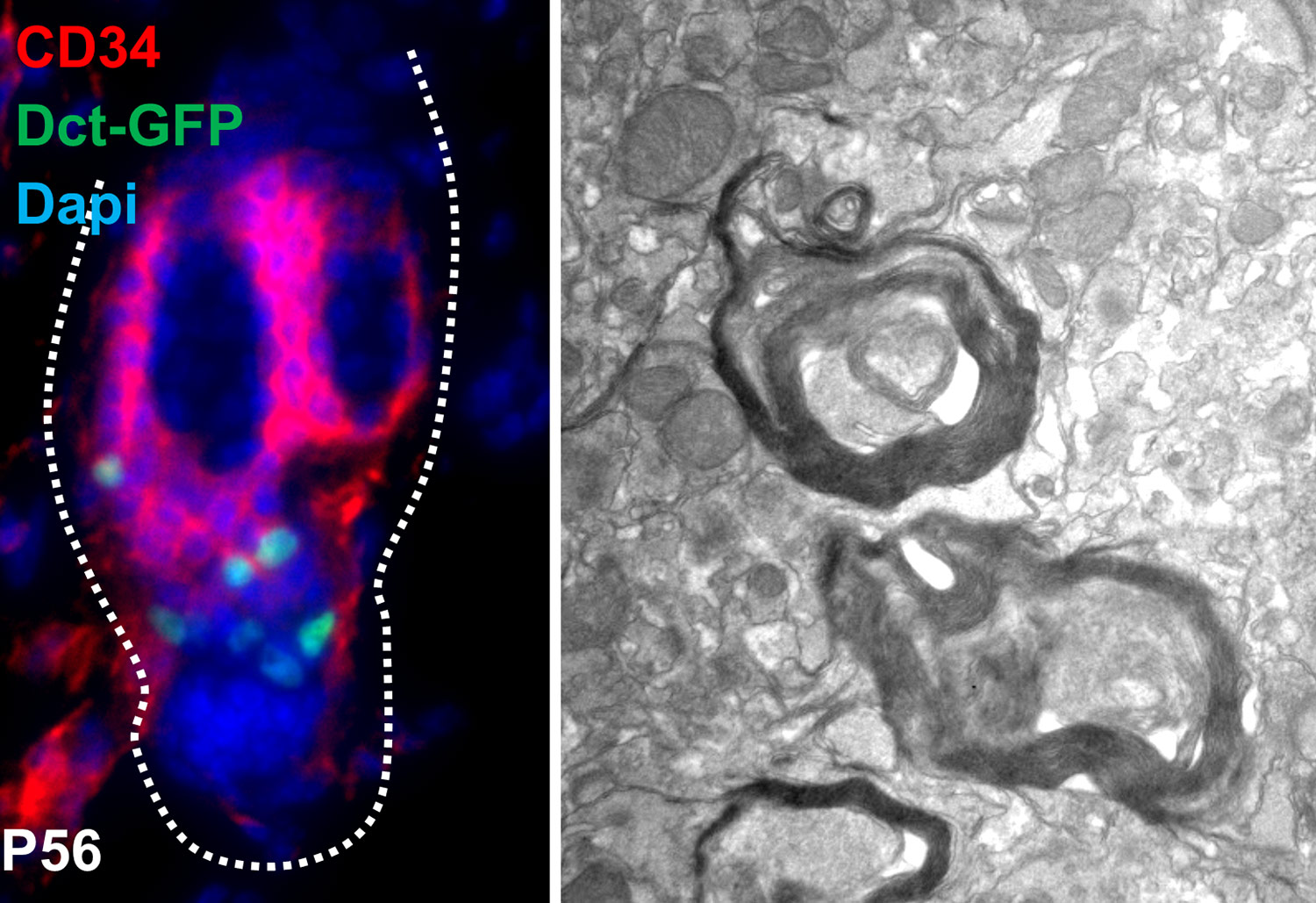 Newswise — BALTIMORE, MD, May 6, 2019-  Neurodegenerative diseases like multiple sclerosis (MS) affect millions of people worldwide and occur when parts of  the nervous system lose function over time. Researchers at the University of Maryland School of Medicine (UMSOM) have discovered that a type of skin-related stem cell could be used to help regenerate myelin sheaths, a vital part of the nervous system linked to neurodegenerative disorders.

The discovery into these types of stem cells is significant because they could offer a simpler and less invasive alternative to using embryonic stem cells. This early stage research showed that by using these skin-related stem cells, researchers were able to restore myelin sheath formation in mice.

Using a mouse model, Dr. Hornyak’s team of researchers discovered a way to identify a specific version of a cell known as a melanocyte stem cell. These are the precursor cells to the cells in skin and hair follicles that make a pigment know as melanin, which determines the color of skin and hair. These melanocyte stem cells have the ability to continue to divide without limit, which is a trait that is not shared by other cells in the body. Additionally, the researchers discovered that these stem cells can make different types of cells depending on the type of signals they receive. This research was published in PLoS Genetics.

Importantly, unlike the embryonic stem cell, which must be harvested from an embryo, melanocyte stem cells can be harvested in a minimally-invasive manner from skin.

Dr. Hornyak’s research team found a new way to not only identify the right kind of melanocyte stem cells, but also the potential applications for those suffering from neurodegenerative disorders. By using a protein marker that is only found on these specialized cells, Dr. Hornyak’s research group was able to isolate this rare population of stem cells from the majority of the cells that make up skin. Additionally, they found that there exist two different types of melanocyte stem cells, which helped in determining the type of cells they could create.

Using this knowledge, the UMSOM researchers determined that under the right conditions, these melanocyte stem cells could function as cells that produce myelin, the major component of a structure known as the myelin sheath, which protects neurons and is vital to the function of our nervous system. Some neurodegenerative diseases, like multiple sclerosis, are caused by the loss of these myelin-producing, or glial, cells which ultimately lead to irregular function of the neurons and ultimately a failure of our nervous system to function correctly.

Dr. Hornyak and members of his laboratory grew melanocyte stem cells with neurons isolated from mice that could not make myelin. They discovered that these stem cells behaved like a glial cell under these conditions. These cells ultimately formed a myelin sheath around the neurons that resembled structures of a healthy nerve cell. When they took this experiment to a larger scale, in the actual mouse, the researchers found that mice treated with these melanocyte stem cells had myelin sheath structures in the brain as opposed to untreated mice who lacked these structures.

“This research holds promise for treating serious neurodegenerative diseases that impact millions of people each year. Our researchers at the University of Maryland School of Medicine have discovered what could be a critical and non-invasive way to use stem cells as a therapy for these diseases,” said UMSOM Dean, E. Albert Reece, MD, PhD, MBA, Executive Vice President for Medical Affairs, UM Baltimore, and the John Z. and Akiko K. Bowers Distinguished Professor.