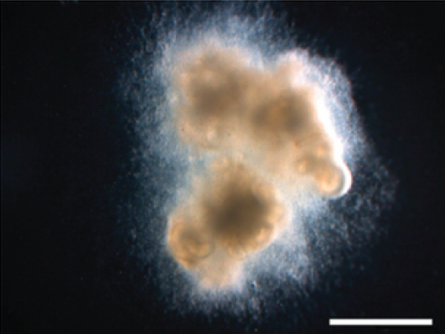 Human intestinal organoids with functioning nerves were generated in a petri dish using human pluripotent stem cells, which can become any cell type in the body. 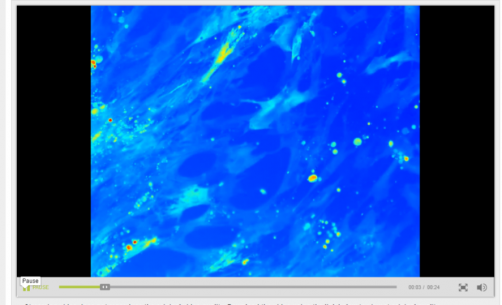 Credit: Reprinted with permission from Nature Publishing Group
Previous Next

“This technique will give us the tools to understand how the nervous system connects to the gut at the cellular level,” says Michael Wolfson, Ph.D., program director for Rehabilitation Engineering at NIBIB. “This is critically important, as the network of nerves that modulates the gut is the second-largest and least-studied component of the nervous system.”

The research was carried out at the Cincinnati Children’s Hospital Medical Center under the co-leadership of Jim Wells, Ph.D., director of the Pluripotent Stem Cell Facility and Michael Helmrath, M.D., surgical director of the Intestinal Rehabilitation Program. The team reported their results in the November 21st online issue of the journal Nature Medicine.

Intestines in a dish

In 2010, Wells’ lab demonstrated that stem cells can be used to create intestinal organoids— three-dimensional organ buds that have anatomical characteristics similar to an intestine. The process involved bathing human induced pluripotent stem cells (adult stem cells that are capable of turning into different cell types) in a petri dish with biochemicals that facilitated their assembly into intestinal tissue.

However, these organoids didn’t contain any neurons, a critical component of a functioning intestine. The human intestine is home to the second largest number of neurons in the body, collectively referred to as the enteric nervous system. These neurons control important functions such as peristalsis—a series of wave-like muscle contractions that move food through the digestive tract. They also stimulate the secretion of enzymes that aide in digestion.

In this recent paper, Wells and colleagues sought to create an intestinal organoid with a functional enteric nervous system. First, they generated embryonic-stage neural crest cells from pluripotent stem cells in a petri dish. Next, these cells were biochemically manipulated to form precursor cells for the enteric system. In the final stage, the researchers used trial and error to determine how and when to incorporate the enteric neural precursor cells into a developing intestinal organoid.

“We tried a few different approaches largely based on the hypothesis that, if you put the right cells together at the right time in the petri dish, they’ll know what do to. It was a long shot, but it worked,” said Wells.

Once created, the researchers implanted the engineered tissue into mice with suppressed immune systems and allowed it to grow for 6-10 weeks. The researchers reported that over this time period, blood vessels began to grow within the tissue, supplying it with oxygen and nutrients, leading to new tissue growth and maturation. In addition, neurons and glia (cells that provide support and protection for neurons) were generated and organized into neural circuits and nerve bundles, similar to the human gut.

The researchers then used their intestinal model to study a rare form of Hirschprung’s disease, a condition in which all or part of the intestine fail to develop a normal nervous system, causing waste to accumulate. In this portion of the study, the organoid was developed as initially described, however, the pluripotent stem cells that would eventually turn into nerves contained a genetic mutation associated with a severe form of Hirschprung’s disease. This enabled the researchers to examine how molecular changes resulting from the mutation correspond to abnormalities in the developing gut.

This research was supported in part by NIH grants TR000546, EB021780, DK098350, and DK103117. NIBIB recently contributed funding through a SPARC grant. The NIH SPARC Program funds research to elucidate the role of the peripheral nervous system in controlling internal organs and to catalyze the development of therapies that stimulate it to improve health.