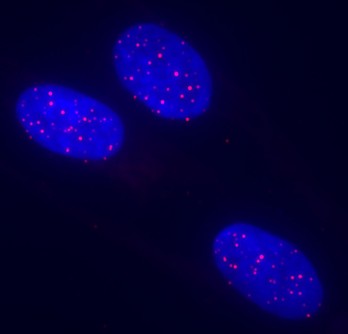 Newswise — PHILADELPHIA—Researchers from the Perelman School of Medicine at the University of Pennsylvania have made a discovery about muscular dystrophy disorders that suggest new possibilities for treatment. In a study published today online in Stem Cell Reports, researchers found that stem cells in the muscles of muscular dystrophy patients may, at an early age, lose their ability to regenerate new muscle, due to shortened telomeres.

Telomeres are tail-like chains of DNA at the ends of chromosomes that protect chromosomes during cell division. In many cell types, telomeres also serve as biological countdown clocks, being shortened with every cell division until their reduced length triggers the death of the cell or an inactive, non-dividing state called senescence. The team found that telomeres specifically in muscle stem cells are abnormally short in teenage boys with Duchenne Muscular Dystrophy (DMD), as well as in young mice with the same genetic disorder. The finding of shortened telomeres could help explain why prior research has found defects in the functions of muscle stem cells from muscular dystrophy patients.

“We found that in boys with DMD, the telomeres are so short that the muscle stem cells are probably exhausted,” said the study’s senior author, Foteini Mourkioti, PhD, an assistant professor of Orthopaedic Surgery and Cell and Developmental Biology, and co-director of the Musculoskeletal Regeneration Program in the Penn Institute for Regenerative Medicine. “Due to the DMD, their muscle stem cells are constantly repairing themselves, which means the telomeres are getting shorter at an accelerated rate, much earlier in life. Future therapies that prevent telomere loss and keep muscle stem cells viable might be able to slow the progress of disease and boost muscle regeneration in the patients.”

Muscles tend to degenerate in muscular dystrophy disorders because the gene mutations that cause these disorders leave muscle fibers abnormally fragile, so that they are damaged even by ordinary physical activity. In principle, muscle stem cells could regenerate this lost muscle, thereby slowing or even stopping the disease process. But some scientists, including Mourkioti, have suspected that in muscular dystrophy the continuous cycles of muscle damage and repair—requiring near-constant cell division for the muscle stem cells—soon erode the regenerative capacities of muscle stem cells, by shortening their telomeres and inducing early death or senescence.

“The problem with trying to identify what is happening in DMD muscle stem cells is that we’ve lacked sufficient tools for measuring telomere length in these stem cells,” Mourkioti said.

To enable their discovery in DMD patients, Mourkioti and colleagues developed a new stem cell telomere-measuring method, based on an existing technique called fluorescence in situ hybridization (FISH). Telomeres are made of one short sequence of DNA building blocks (TTAGGG) repeated over and over, and the new FISH-based method (MuQ-FISH) uses a fluorescent probe designed to stick specifically to that sequence. Longer telomeres accumulate more probes and fluoresce more brightly. The technique can be used with a microscope and electronic imaging equipment to measure the lengths of telomeres within individual stem cells.

Mourkioti and her team initially used their new technique to show that the telomeres of muscle stem cells are about the same length in healthy lab mice, whether the mice are young or old. In contrast, the scientists found that in young mice with a severe DMD-like disorder as well as in several teenage patients with DMD, muscle stem cells on average had abnormally shortened telomeres. Other non-stem muscle cells in the DMD patients had normal telomere lengths.

The findings suggest that telomere-shortening specifically in muscle stem cells is a factor in the progressive muscle weakening and wasting seen in muscular dystrophy patients. That, in turn, suggests that gene therapy and other treatments now being developed for muscular dystrophies might be more beneficial if administered before muscle stem cells have lost their muscle-regenerating abilities. The findings also point to the possibility that future treatments to block the shortening of telomeres in muscle stem cells might be able to slow or even stop the disease. Mourkioti and colleagues now plan to employ their new method to help them find such a treatment, with an eye toward early intervention, when these stem cells are still capable of making new muscle.

There are about 30 distinct muscular dystrophy disorders, all caused by gene mutations that impair the integrity of muscle cells. The most common, DMD, is caused by mutations to a gene on the X-chromosome, and affects one of every fifteen hundred boys born in the United States. Milder muscular dystrophy disorders typically result in lifelong disability. More severe ones, such as DMD, eventually destroy the muscles needed for breathing, and reduce life expectancy to the mid-20s. At present, there is no specific treatment that can stop the progression of these diseases.