1-Mar-2018 8:05 AM EST, by University of Arkansas, Fayetteville
favorite_border 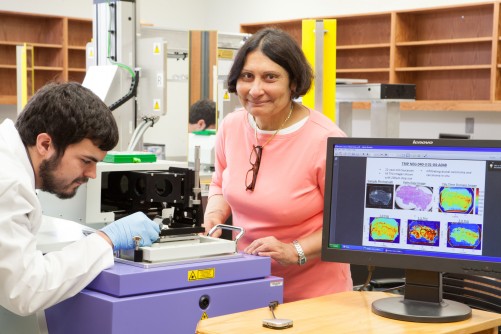 Newswise — FAYETTEVILLE, Ark. – Engineering researchers at the University of Arkansas have moved closer to developing an alternative method of detecting and possibly treating breast cancer.

The researchers, led by Magda El-Shenawee, professor of electrical engineering, work with pulsed, terahertz imaging, a type of electromagnetic radiation technology previously used to find land mines. They adapted the technology to detect tumors and provide highly specific images of them.

Standard breast cancer imaging techniques do not always provide clear assessment of breast tissue on the margins of a tumor. Without an accurate picture of the margins between the tumor and healthy tissue, surgeons cannot be sure they have removed the entire tumor during a surgery.

This shortcoming contributes to high rates – 20 to 40 percent – of secondary surgery, either lumpectomy or mastectomy. Terahertz imaging could lead to fast, noninvasive, and highly specific tumor margin assessment, which in turn could reduce the occurrence of second surgeries, cancer reoccurrence and metastasis.

In their most recent study, funded by a $424,081 grant from the National Institutes of Health, the researchers created terahertz images of breast adenocarcinoma cells, a type of malignancy, excised from mice. These images were taken from 13 tumor samples. To test the accuracy of the terahertz method, the images were then statistically compared to high-resolution histopathology images of the same excised tumor samples. Histopathology is the microscopic examination of tissue changes caused by disease.

In all tissue samples containing only cancer and fat – a combination similar to tissue in the human breast – the terahertz images, when compared to the histopathology images, accurately detected cancerous tissue with a high level of specificity.

On the other hand, samples containing cancer, fat and muscle showed only a reasonable correlation, El-Shenawee said. In these samples, the terahertz images detected cancer cells at the margins of tumors and muscle tissue, but not at high enough levels of specificity.

“Overlap between muscle and cancer tissue in the terahertz image creates some challenge in correctly classifying these regions,” El Shenawee said. “While muscle is unlikely to be present in surgical sections of human breast cancer, other kinds of fibrous tissue may be, so this requires further investigation with more advanced models.”

Future work will focus on spontaneously generated breast cancer tumors from genetically modified mice, which have tumor and tissue structures closer to that of humans. El-Shenawee said these models will provide a more accurate assessment of terahertz imaging. The researchers will also compare the terahertz images to other standard imaging techniques, such as radiography and computed tomography, or CT scan.

Pulsed, terahertz spectroscopy produces high-quality images of the tissue, down to 80 micrometers. It scatters fewer waves than radiography, which enables deeper imaging into an object. Also, because terahertz radiation can transmit through most non-metallic materials, the systems can “see” through concealing barriers. For many years, El-Shenawee has focused on developing this detection system for health-care applications, while also investigating the unique electromagnetic signals emitted by breast cancer cells.

Their findings were published in the February issue of Journal of Biomedical Optics.

This research was conducted in the Terahertz Imaging and Spectroscopy research facilities at the University of Arkansas.