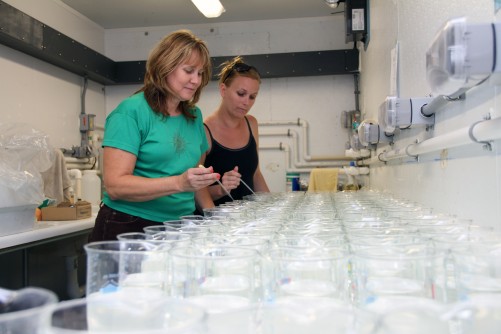 Newswise — On April 20, 2010, an explosion on the Deepwater Horizon (DWH) rig caused a release of 200 million gallons of oil into the Gulf of Mexico before the well was capped on July 15, 2010. Close to 100,000 kilometers, including more than 1,000 total linear miles of coastlines in Louisiana, Alabama, Mississippi and Florida were affected. A number of methods were used to prevent the oil from reaching the shoreline, including an estimated 1.9 million gallons of dispersant. Dispersants are one of the most controversial of these methods and are typically used when other methods are not adequate.

Researchers from Florida Atlantic University’s Harbor Branch Oceanographic Institute conducted several studies to determine the impacts of the DWH on marine organisms such as oysters, conch, shrimp, corals as well as marine plankton (microalgae or phytoplankton, rotifers or zooplankton), which provide the basis of coastal and oceanic food webs. Findings from their oyster and phytoplankton studies were published in 2014 in the Journal of Shellfish Research and the Bulletin of Environmental Contamination and Toxicology.

Chemical dispersants do not remove oil from water, but merely accelerate its natural dispersion. Although the use of dispersants decreased the impact of oil to shorelines and surface-dwelling organisms, such as birds, dispersants allowed the oil to be more easily taken up by organisms that live in the water column. Rather than disappearing, the dispersed oil ended up in bottom sediments, where it remains, posing future threats to pelagic and benthic organisms.

“Oil releases may affect marine organisms in a number of ways including physically, through toxic effects known to produce carcinogenic and mutagenic effects by modifying behavior, or through modifications in their natural habitats,” said Susan Laramore, Ph.D., an author in both of the publications, assistant research professor, and a marine and molecular biologist who studies aquatic animal health issues at FAU’s Harbor Branch Aquatic Animal Health Laboratory. “The Deepwater Horizon oil spill happened to coincide with the spring spawning season for a number of aquatic organisms, including shrimp and the eastern oyster.”

In the study published in the Journal of Shellfish Research, Laramore and her collaborators conducted studies to assess fertilization success, development, survival, and swimming behavior as well as sub-lethal exposure laboratory experiments to assess the impacts of brief exposures on the growth and survival of oysters (average lifespan of two years in the Gulf of Mexico). Findings from this study show that the DWH oil and dispersed oil impacted all of the factors listed above, although the extent of the impact varied depending on oyster life stage, amount of exposure and oil concentration.

Fishermen report that the population of oysters have not come back to pre-spill levels. Diminished populations of oysters also affect marine coastal food webs and associated ecosystems.

In the second published study, Laramore and her collaborators examined two species of algae, used to feed molluscs, crustaceans and fish. These two species served as “models” for phytoplankton species in the Gulf of Mexico that were exposed to crude oil and weathered oil, dispersant and dispersed oil during the DWH oil spill. Results from this study revealed that the dispersant and dispersed oil affected the growth and motility of the algae, which may have had negative impacts on the food chain.

“Although the impacts of the Deepwater Horizon oil spill may not have long-term consequences especially for short-lived species, the effects of oil and dispersant on lower trophic food sources impacted fisheries recruitment in the short-term, and longer term impacts are likely to be seen in some species and ecosystems,” said Laramore.

Florida Atlantic UniversityFlorida Atlantic University, established in 1961, officially opened its doors in 1964 as the fifth public university in Florida. Today, the University, with an annual economic impact of $6.3 billion, serves more than 30,000 undergraduate and graduate students at sites throughout its six-county service region in southeast Florida. FAU’s world-class teaching and research faculty serves students through 10 colleges: the Dorothy F. Schmidt College of Arts and Letters, the College of Business, the College for Design and Social Inquiry, the College of Education, the College of Engineering and Computer Science, the Graduate College, the Harriet L. Wilkes Honors College, the Charles E. Schmidt College of Medicine, the Christine E. Lynn College of Nursing and the Charles E. Schmidt College of Science. FAU is ranked as a High Research Activity institution by the Carnegie Foundation for the Advancement of Teaching. The University is placing special focus on the rapid development of critical areas that form the basis of its strategic plan: Healthy aging, biotech, coastal and marine issues, neuroscience, regenerative medicine, informatics, lifespan and the environment. These areas provide opportunities for faculty and students to build upon FAU’s existing strengths in research and scholarship. For more information, visit www.fau.edu.

Bulletin of Environmental Contamination and Toxicology, 2014; Journal of Shellfish Research; 2014