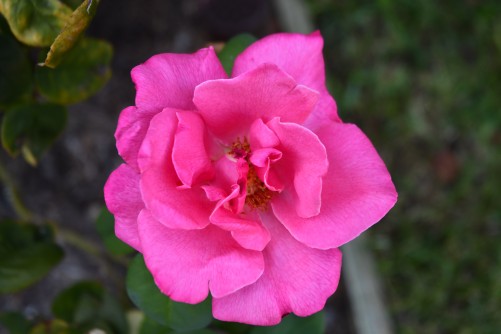 Roses, like other beloved plants such as coffee, bananas, blueberries, and chrysanthemums are polyploids, which makes breeding improvements into new varieties is much more complex.

Newswise — COLLEGE STATION — Some of the world’s most beloved plants — coffee, bananas, potatoes, chrysanthemums and roses, to name a few — could be made even better, but the complexity of their chromosomes either stumps or stifles scientists who study them.

“They’re polyploids, which means instead of having two sets of chromosomes like humans or corn or soybeans or peaches, they have four, six, eight or even more sets,” said Dr. David Byrne, professor of Rosa and Prunus breeding and genetics for Texas A&M AgriLife Research, College Station. “They are among the most important ornamental and food crops, but they are always a challenge when trying to develop better varieties.”

“With a diploid, or species with only two sets, researchers have two choices per gene when introducing a trait to breed a better variety,” he explained. “With a polyploid, if it has four sets of chromosomes, you have four choices per gene, for example. So it’s that much more complicated with multiple sets when trying to interpret what’s going on within the plant.”

Byrne decided to bring scientists from around the world together to ponder how to collaborate and compare findings with the hopes of accelerating work on these plants. With a $47,000 grant from the U.S. Department of Agriculture-National Institute of Food and Agriculture, about 40 researchers will convene in San Diego Jan. 11-12 to begin the work.

The grant was one of 12 totaling $35 million by the USDA-NIFA for science-based solutions and new technology for the specialty crop industry.

“A lot of the problem with polyploids is computational,” said Byrne, who also is holder of the Basye Endowed Chair of Rose Genetics at Texas A&M University. “The more sets of chromosomes, the greater the complexity of the problem and the more difficult it is to understand.”

Advances in DNA sequencing, for instance, can cut through the genetic code of diploid crops in rapid speed, he said, but lag when yielding information and methods of analyzing data on polyploid crops.

Byrne said while researching the topic, he realized various scientists are studying the issues of polyploids on individual species but not working together for overall, common areas that could benefit all of the crops and hasten advances and improvements.

“In general, progress in a breeding program that is working with polyploids is slower than diploids to begin with, and then not having the genomic tools to accelerate the breeding just makes it worse. There may be a study in potatoes and another in chrysanthemums, but they are not working together,” he said. “And we have a lot of the same issues in all these crops. So the concept here is to bring them all together and agree to work together — to try to put our heads together to solve some of the basic problems we have.”

In addition to scientists currently working on polyploid crops, Byrne plans to include affiliated industries interested in the advancement of these crops. He expects a “white paper” produced from the January meeting to clearly identify gaps in techniques and understanding along with providing suggestions on what research is needed to solve these problems.

“Hopefully by the time we are done, we will have a work plan to develop a grant that will enable us to work on improving all the polyploid crops,” Byrne said.