25-Feb-2016 8:00 AM EST, by Stowers Institute for Medical Research
favorite_border 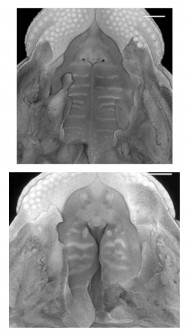 Newswise — KANSAS CITY, MO —Researchers from the laboratory of Paul Trainor, Ph.D., at the Stowers Institute of Medical Research have developed an effective and reliable technique for studying high-arched palate using a mouse model. The methodology could expand research into the genetic aspects of this craniofacial abnormality.

High-arched palate, also known as "pseudo-cleft" or "vaulted palate," refers to a pronounced curvature of the roof of the mouth. It can lead to enlarged gums, crowded molars and other dental problems, impair speech, and negatively affect a person's quality of life. But its genetic roots remain unclear, in part because researchers have lacked animal models in which to study the condition.

"High-arched palate is under-researched at the basic science level, given its presence in a relatively large number of syndromes," says Zachary Conley, the paper's first author. "A greater understanding of high-arched palate can lead to insights into palatogenesis, or the generation of the palate, as a complex developmental process. Our quantitative methodology sets the stage for further study of this condition."

Mice have long been used in genetic disorder research to mimic human diseases. For this study, Trainor Lab researchers and their collaborators used a mouse model of Treacher Collins syndrome (TCS), a human congenital condition that affects about 1 in 50,000 live births and impairs the bone and tissue development of the head and face, including the palate.

The TCS mice showed signs of palate formation problems during development, and about 46 percent exhibited a soft or fully cleft palate. TCS mice also showed significantly higher arched palate compared to their control counterparts, as defined by shelf height and angle differences – a clear validation of the research team’s criteria.

Published online ahead of print in the journal Developmental Biology, the study was enabled by a 10-year research effort by the Trainor Lab and collaborators to understand the causes and effects of TCS. “Our work over the last decade has been aimed at understanding how Treacher Collins syndrome occurs, what cells and tissues are affected, and what we might be able to do to prevent it,” says Trainor.

One promising finding of the study showed that TCS mice born to mothers with reduced p53 gene function showed no signs of cleft palate.

In prior work, the Trainor Lab linked the p53 gene to an uptick in neuroepithelial cell death and a resulting decline in migrating neural crest cells, which produce most of the cartilage, bone and connective tissue in an embryo's face and head. Without a sufficient supply of these cells, key areas of the developing mouth and nasal cavity fail to grow together and fully form.

In the current study, by generating TCS mice with impaired p53 gene function, the researchers were able to improve, or rescue, the high-arched palate phenotype, suggesting a link between tissue formed by cranial neural crest cells and the underdevelopment of the palatal shelf in the pathogenesis of high-arched palate.

And in related research, the Trainor Lab and collaborators have recently shown that the neuroepithelial cells that give rise to neural crest cells show a marked sensitivity to oxidative stress, and that maternal antioxidant supplementation can lessen or prevent craniofacial abnormalities in the TCS mouse model. These findings suggest that maternal antioxidant supplementation, which suppresses oxidative stress-induced p53-dependent neuroepithelial cell death, may be a possible avenue for clinical prevention of TCS. The study was published in the January 21 issue of Nature Communications.

“Our recent papers highlight the fundamental importance of basic biology in understanding clinical problems, by defining the origins of birth defects and their possible prevention” Trainor says.

The studies were funded by the Stowers Institute, the Healing Foundation, and the National Institute of Dental and Craniofacial Research of the National Institutes of Health (R01DE016082). The content is solely the responsibility of the authors and does not necessarily represent the official views of the NIH.

Researchers at the Stowers Institute for Medical Research have found a way to use mice to study high-arched palate, a disorder in which the roof of the mouth is oddly high and steep. The mice mimic Treacher Collins syndrome (TCS) in humans, of which high-arched palate is a feature. To help this research move forward, scientists needed to come up with a consistent, measurement-based definition of high-arched palate, one they could use across all mouse models.

With this in mind, researchers from the laboratory of Paul Trainor, Ph.D., and their collaborators used a 3-D imaging technique to measure the palates of the offspring to see which of their attributes – palate shelf length, shelf width, arch height, or arch angle – were significantly different. They found that TCS mice had much higher palate arches, in terms of shelf height and angle, than the normal mice.

The researchers were interested to find that TCS mice born to mothers with impaired p53 gene function did not develop cleft palates. This finding, which follows an earlier study that showed a link between p53 and the death of key cells that form an embryo's face and head, warrants further exploration.

Recent related work from the Trainor Lab and their collaborators showed that TCS mice born to mothers that had received antioxidant supplements exhibited fewer craniofacial abnormalities than control group mice. This observation suggests that maternal antioxidant supplementation may provide a way to protect against TCS.

Building on a decade of work by the Trainor Lab and their collaborators to understand the causes and effects Treacher Collins syndrome, these findings demonstrate the importance of fundamental biological research for understanding the origins of health problems and possible approaches to their prevention.