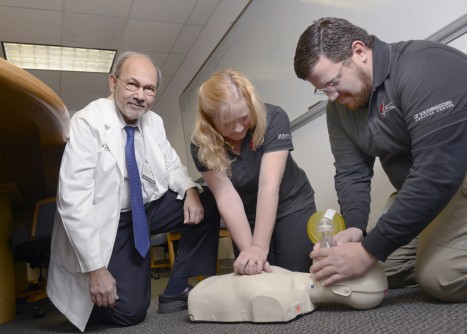 DALLAS – April 5, 2016 – Administering heart resuscitation drugs to patients whose cardiac arrest is witnessed at the time of the attack can improve survival, but needs to be done through an IV line rather than directly into bone marrow as is more commonly done by paramedics, a new study involving UT Southwestern Medical Center emergency physicians and Dallas-Fort Worth Emergency Medical Services (EMS) agencies reveals.

Given in conjunction with defibrillation shocks, the drugs – amiodarone or lidocaine – can help stabilize the heart beat after cardiac arrest in cases where the heart attack was witnessed and paramedics arrive in a timely fashion, the researchers found. The resuscitation drugs did not have an impact in cases not witnessed, where the heart had been stopped for a longer period of time.

Importantly, researchers found that the drugs are only effective when administered directly into a vein (intravenous), rather than the more commonly used technique of administering the drugs directly into bone marrow (intraosseous).

“What the drugs do is stabilize the rhythm so that the shock actually becomes more effective in converting the heart to a normal rhythm with a pulse. Even though these drugs have been used for more than 30 years, we didn’t have this important information on whether the drugs were valuable and in what circumstances,” said Dr. Ahamed Idris, Professor of Emergency Medicine and Internal Medicine at UT Southwestern, and Chief of Research in Emergency Medicine.

The study, which appears in the New England Journal of Medicine, examined records from more than 4,600 patients with out-of-hospital cardiac arrest involving paramedics from 55 emergency medical services (EMS) agencies at 10 North American sites participating in the North American Resuscitation Outcomes Consortium (ROC), to which UT Southwestern and the Dallas-Fort Worth ROC Network is the largest contributor.

“We tested these drugs against each other and against placebo and we learned some very important information,” said Dr. Idris, Director of the Dallas-Fort Worth Center for Resuscitation Research, sponsored by the National Institutes of Health (NIH).

“We don’t really expect people who were in cardiac arrest without treatment for a long time to survive no matter what, but when we did the analysis of people who had witnessed cardiac arrest – they were seen to go down and someone called 911 – those patients definitely did significantly better when given the drugs,” Dr. Idris noted. “Though seemingly small, a confirmed overall difference of 3 percentage points in survival with drug therapy would mean that 1,800 additional lives could be saved each year in North America alone after out-of-hospital cardiac arrest.”

In an accompanying editorial, Dr. Jose Joglar, Professor of Internal Medicine at UT Southwestern noted that more than 365,000 people die annually in the United States from out-of-hospital cardiac arrest.

“The data do not support the use of amiodarone or lidocaine for all patients, but, although they are not absolutely conclusive, the data suggest that EMS personnel should consider these agents when the arrest is witnessed,” he wrote in the editorial. “The rate of survival to hospital discharge was significantly higher with amiodarone (27.7%) or lidocaine (27.8%) than with placebo (22.7%).”

Dr. Joglar, Program Director for Clinical Cardiac Electrophysiology, also noted the study’s affirmation of the importance of timely cardiopulmonary resuscitation (CPR) by bystanders in such cases.

Previous research efforts by the Resuscitation Outcomes Consortium found that paramedics who deliver defibrillator shocks within three minutes of arriving at the scene of a cardiac arrest can boost survival, and that the depth of chest compressions and the rate at which they were applied make a significant impact on survival and recovery of patients.

The trial was sponsored by the National Heart, Lung, and Blood Institute (NHLBI). Additional funding was provided by U.S. Army Medical Research and Materiel Command, the Canadian Institutes of Health Research Institute of Circulatory and Respiratory Health, Defence Research and Development Canada, the Heart and Stroke Foundation of Canada, and the American Heart Association.