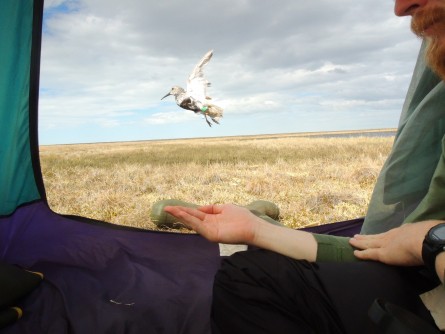 After being tagged and equipped with a geolocator, a Dunlin is released by a WCS field scientist at Chaun River Delta. 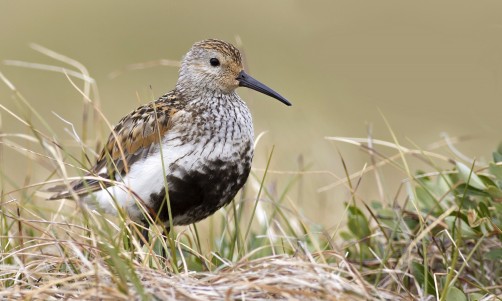 A new study looks at the migration of these birds that breed in Arctic Beringia during the summer months and travel to point souths during the winter. The data helps identify key habitat used by the birds and informs the conservation of these areas.

Newswise — Conservation of intertidal habitat— 65 percent of which has been lost over the last 50 years— is critical to the survival of countless birds during migration on the East Asian Australasian Flyway. In an effort to understand the threats and inform conservation of these areas, scientists from The Institute of Biological Problems of the North (Russian Academy of Sciences) and WCS (Wildlife Conservation Society) have collaborated to identify vital stopover areas for the dunlin, a shorebird known to migrate up to 7500 km (4700 miles) to reach its destination.

Arctic shorebirds breeding in Chukotka and Alaska depend upon key coastal intertidal sites along their migratory route to find food to supply energy on their flights. Such intertidal habitats are rapidly being lost to human development, resulting in marked declines of all species that have been studied on this flyway. Some, like the spoon-billed sandpiper, are now at critical risk of extinction, while 23 other species are now threatened, endangered, or vulnerable to extinction. Many others are in rapid decline, losing up to 10 percent of their numbers each year. A key driver of these losses is thought to be associated with development projects along the Yellow Sea coastline that convert intertidal mudflats to dry ground. To better understand the nuanced threats to shorebird species that breed in Chukotka and nearby Alaska, Russian and American scientists have collaborated on a number of studies, including an assessment of nesting densities and factors influencing nest survival on breeding grounds in Russia. Most recently they have charted the migratory movements, timing, and wintering ground locations of a sub-species of dunlin, a relatively common shorebird that breeds in Chukotka. “To prevent declines in populations of birds that breed in the Arctic, we must understand their needs after leaving the breeding grounds,” said Dr. Rebecca Bentzen, Avian Research Coordinator with WCS and lead author of the study.

In order to track dunlin migrations, Russian researchers attached small geolocators to the legs of the birds. These devices, which weigh less than a paper clip, register light levels in relation to an internal timer, which can be used to estimate latitude and longitude (and hence the flight pattern of the bird) when the bird is recaptured upon return to its breeding grounds. The data collected over the four-year study showed that dunlin captured during the breeding season in Chukotka wintered in China, South Korea, and Vietnam, primarily between the south coast of Bohai Bay, the Yellow Sea, and Gulf of Tonkin in China. Important stopover areas (places birds rest and replenish energy during these epic journeys) included Sakhalin Island (Russia), and coastal areas around the Yellow Sea (Korea and China). In addition to documenting migration routes both to and from breeding habitats in Russia, the scientists were able to determine other vital information, such as the location and amount of time spent at stopover locations. Unfortunately while this research provides greater understanding of the critical habitats that allows these birds to thrive, it also raises new conservation challenges.“Stopover sites have largely been overlooked as conservation priorities,” said Bentzen. “By only focusing on certain stages of the life cycles of these birds—be it their time on the breeding grounds or where they winter—we have missed a key element of their annual cycles. It doesn’t matter how well we protect the breeding grounds – if these stopover sites are not adequately protected, dunlins and other species will never make it to the breeding grounds.”

Along with those scientists directly involved from Russia and the U.S., “citizen scientists” along the flyway got involved in the study, including a Korean birdwatcher who photographed one of the study birds and identified it by leg bands.

Dr. Martin Robards, Director of the WCS Arctic Beringia Program and a study co-author said, "This work is only possible through the dedication and leadership of our Russian partners Alexei Dondua and Dr. Diana Solovyeva. They have consistently overcome the challenges of working in such a remote area and taken the time to develop the necessary transboundary partnerships that have allowed such exciting research to emerge." The information from this study helps justify the need for conservation action at key stopover points and wintering areas, and will be a key focus during upcoming conferences, including the IUCN World Conservation Congress in September and the East Asian Australian Fly Partnership meeting of the Parties in January.

Bentzen said, “We need to work collaboratively with our international colleagues to provide the best possible protection for the habitat of migrating shorebirds at each stage of their annual movements. This project is a perfect example of what we can learn when we work together to address common problems.”

“Large-scale movements of dunlin breeding in Chukotka, Russia during the non-breeding period,” appears in the journal Wader Studies. Authors include Rebecca Bentzen and Martin Robards of the WCS Arctic Beringia Program; independent researchers Alexei Dondua of St. Petersburg, Russia, and Ron Porter of Ambler, Pennsylvania; and Diana Solovyeva of the Institute of Biological Problems of the North (Russian Academy of Science). Find the abstract here. For a full copy of the study (DOI 10.18194/ws.00034), please contact Scott Smith at [email protected] We appreciate the generous financial support of the John D. and Catherine T. MacArthur Foundation and the Trust for Mutual Understanding. We thank Claude Schimper at Kinross Gold Corporation’s Kupol Mine for generous help with our field logistics. 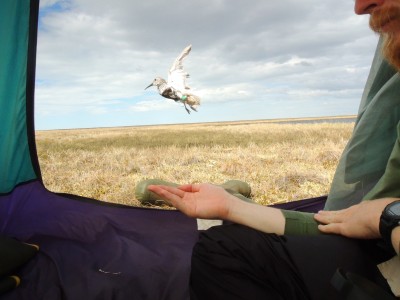 Caption: After being tagged and equipped with a geolocator, a Dunlin is released by a WCS field scientist at Chaun River Delta. 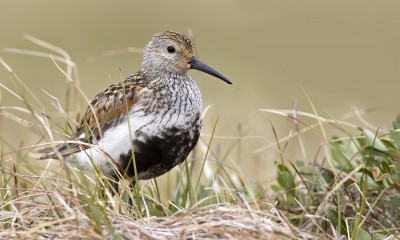 Caption: A new study looks at the migration of these birds that breed in Arctic Beringia during the summer months and travel to point souths during the winter. The data helps identify key habitat used by the birds and informs the conservation of these areas.