S&T’s PIADC is helping bring back the Piping Plover 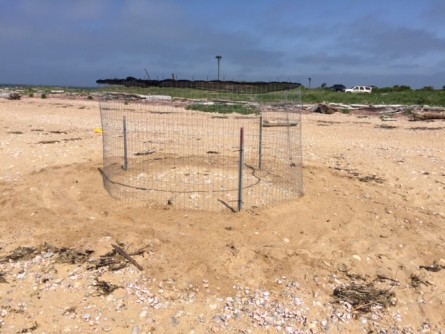 Newswise — The piping plover population, an endangered species, increased this year, thanks to the hard work of the U.S. Fish and Wildlife Service (FWS) and the Department of Homeland Security (DHS).

FWS avian experts have spent their Thursdays during the spring and summer of 2017 taking an eastbound morning ferry from the eastern tip of Long Island across the notoriously unpredictable waters of Plum Gut – Long Island Sound’s mile and a half-wide gateway to the Atlantic Ocean. On the other side of the “Gut,” as it’s known to locals, lies the pristine shores of Plum Island, home to the Department of Homeland Security Science and Technology Directorate’s (S&T) Plum Island Animal Disease Center (PIADC).

While scientists and operational experts are focused on keeping foreign animal diseases away from our livestock populations and providing essential security measures to our nation’s food supply chain, the laboratory and support buildings being used for this mission only use about 85 percent of Plum Island’s 840 acres. The rest of this well-documented de facto nature preserve is just that – an untouched environment. The weekly FWS visits to Plum Island are part of a seasonal piping plover nesting check designed to aid in growing the population of a species that nests near the high tide line along beach environments.

Piping plovers, a protected species under the Endangered Species Act since 1986, are designated as federally threatened along the Atlantic Coast, meaning the population would continue to decline if not protected. In fact, the state of New York has identified piping plovers as endangered, which means they could totally disappear from the state without critical protection. Plum Island is providing that protection. In fact, in the past month, four more chicks have hatched on Plum Island’s southeast beach, bringing the season total to six plovers hatched this year. Unfortunately, only two chicks survived.

Two hundred of the approximately 800 breeding pairs of piping plovers on the Atlantic Coast nest on the shores of New York. An interagency commitment between DHS S&T and FWS to protect the piping plovers on Plum Island has resulted in a longstanding partnership involving staff from both organizations. Through banding efforts taking place on the east coast, several repeat breeders have been identified on Plum Island’s pristine south-facing beach just north of Pine Point, the island’s southern-most locale.

The importance of the national effort to protect these birds has only increased as high tide lines creep into the nesting areas and predatory birds make quick work of these nests, which are made directly on the beach. This year alone on Plum Island, four nests were swept away by the tides.

While staff have approved routes on the island where they have access to walk for exercise, they cannot access the beach where the plovers nest to protect the birds and nests. Mandelburg, who has participated in many of the counts, has also had the opportunity to see the newly hatched plovers dance around the surf line with their parents. “Piping Plover babies look like little puffballs scurrying along the sand. It really is one the more adorable things that you’ll ever see at a beach,” he said.

In addition to keeping people off of the beaches where the plovers nest, PIADC has also provided a little extra help to one particular pair of nesting plovers. A staked enclosure fully covered in light netting was constructed over one nest earlier this summer to protect a third attempt at a nest by the same pair of plovers. This was done to keep predatory birds from destroying the pair’s hard work, after the first two nests were lost to the surf. This third nest was a bit further up the beach giving it a fighting chance to succeed. Thanks to PIADC and FWS, it did, and two chicks hatched shortly thereafter.

Once the nesting season ends in September, the beach north of Pine Point will go back to being just another of Plum Island’s many environmental wonders as the plovers head south for the winter. Come April 2018, however, it will again come alive with piping plovers.