Scientists brew lava and blow it up to better understand volcanoes

The first results are published from experiments that aim to illuminate the physics of lava-water interactions, which can sometimes make eruptions more dangerous 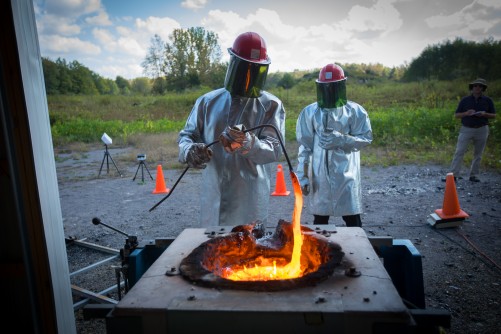 Ingo Sonder, a research scientist at UB’s Center for Geohazards Studies, stirs the molten rock as it melts inside the furnace.

An intense reaction occurs after water is injected into molten rock. 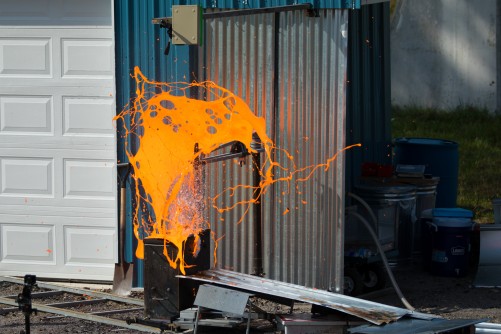 An intense reaction occurs after water is injected into molten rock.

Red-hot. Inside the furnace, rock has begun to melt to form lava.

Newswise — BUFFALO, N.Y. — What happens when lava and water meet? Explosive experiments with manmade lava are helping to answer this important question.

By cooking up 10-gallon batches of molten rock and injecting them with water, scientists are shedding light on the basic physics of lava-water interactions, which are common in nature but poorly understood.

The project — a long-term, ongoing study led by the University at Buffalo — published its first results on Dec. 10 in the Journal of Geophysical Research (JGR): Solid Earth.

The scientists caution that the number of tests so far is small, so the team will need to conduct more experiments to draw firm conclusions.

The research shows that lava-water encounters can sometimes generate spontaneous explosions when there is at least about a foot of molten rock above the mixing point. In prior, smaller-scale studies that used about a coffee cup’s worth of lava, scientists in Germany found that they needed to apply an independent stimulus — in essence pricking the water within the lava — to trigger a blast.

The results reported in JGR: Solid Earth also point to some preliminary trends, showing that in a series of tests, larger, more brilliant reactions tended to occur when water rushed in more quickly and when lava was held in taller containers. (The team ran a total of 12 experiments in which water injection speeds ranged from about 6 to 30 feet per second, and in which lava was held in insulated steel boxes that ranged in height from about 8 to 18 inches.)

“If you think about a volcanic eruption, there are powerful forces at work, and it’s not a gentle thing,” says lead investigator Ingo Sonder, PhD, research scientist in the Center for Geohazards Studies at UB. “Our experiments are looking at the basic physics of what happens when water gets trapped inside molten rock.”

Sonder will also present a poster about this research on Tuesday, Dec. 11 from 1:40-6 p.m. Eastern Time in the Walter E. Washington Convention Center, Hall A-C, in session V23J.

In nature, the presence of water can make volcanic activity more dangerous, such as during past eruptions of Hawaii’s Kilauea and Iceland’s Eyjafjallajökull. But in other cases, the reaction between the two materials is subdued.

Sonder wants to understand why: “Sometimes, when lava encounters water, you see huge, explosive activity. Other times, there is no explosion, and the lava may just cool down and form some interesting shapes. What we are doing is trying to learn about the conditions that cause the most violent reactions.”

Eventually, findings from the long-term project could improve scientists' ability to assess the risk that volcanoes near ice, lakes, oceans and underground water sources pose to people who live in surrounding communities.

“The research is still in the very early stages, so we have several years of work ahead of us before we’ll able to look at the whole range and combination of factors that influence what happens when lava or magma encounters water,” says Valentine, study co-author and director of the Center for Geohazards Studies at UB.

“However, everything we do is with the intention of making a difference in the real world,” he says. “Understanding basic processes having to do with volcanoes will ultimately help us make better forecasting calls when it comes to eruptions.”

Lava-water interactions are associated with a phenomenon known as a molten fuel coolant interaction, in which a liquid fuel (a heat source) reacts violently with a liquid coolant. Much of the experimental work in this field has been done in the context of industrial safety, with a focus on understanding potential dangers in nuclear power plants and metal production sites.

The lava-water experiments build on previous research in this area, while focusing on molten rock.

The work takes place at UB’s Geohazards Field Station in Ashford, New York, some 40 miles south of Buffalo. Run by the UB Center for Geohazards Studies, the facility gives scientists a place to conduct large-scale experiments simulating volcanic processes and other hazards. In these tests, researchers can control conditions in a way that isn’t possible at a real volcano, dictating, for example, the shape of the lava column and the speed at which water shoots into it.

To make lava, scientists dump basaltic rock into a high-powered induction furnace. They heat it up for about 4 hours. When the mixture reaches a red-hot 2,400 degrees Fahrenheit, it’s poured into an insulated steel box and injected with two or three jets of water.

Then, a hammer drives a plunger into the mix to help stimulate an explosion. (In some cases, if enough molten rock was present above the injection point, an intense reaction began before the hammer fell).

In addition to identifying some preliminary trends, the published study attests to the wide variety of physical processes that can occur when lava and water meet.

“The system response to water injection varied from mild, evaporation-dominated processes, in which only a little melt was ejected from the container alongside some steam, to stronger reactions with visible steam jets, and with melt domains ejected to several meters height,” the scientists wrote in JGR: Solid Earth.

The study did not examine why box height and water injection speed corresponded with the biggest explosions. But Sonder, whose has a background in geosciences and physics, offers some thoughts.

He explains that when a blob of water is trapped by a much hotter substance, the outer edges of the water vaporize, forming a protective film that envelops the rest of the water like a bubble, limiting heat transfer into the water and preventing it from boiling. This is called the Leidenfrost effect.

But when water is injected rapidly into a tall column of lava, the water — which is about three times lighter than the lava — will speed upward and mix with the molten rock more quickly. This may cause the vapor film to destabilize, Sonder says. In this situation, the unprotected water would expand rapidly in volume as it heated up, imposing high stresses on the lava, he says. The result? A violent explosion.

In contrast, when water is injected slowly into shallower pools of lava, the protective vapor film may hold, or the water may reach the lava’s surface or escape as steam before an explosion occurs, Sonder says.

He hopes to explore these theories through future experiments: “Not a lot of work has been done in this field,” he says, “so even some of these basic processes are really not well understood.” 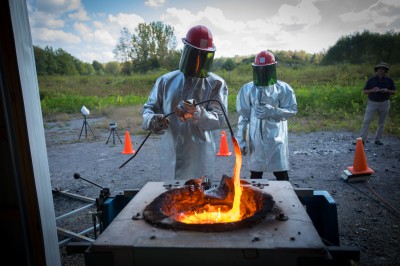 Caption: Ingo Sonder, a research scientist at UB’s Center for Geohazards Studies, stirs the molten rock as it melts inside the furnace.

Caption: An intense reaction occurs after water is injected into molten rock. 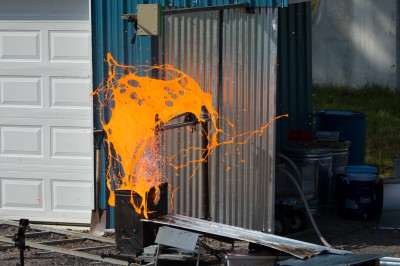 Caption: An intense reaction occurs after water is injected into molten rock.

Caption: Red-hot. Inside the furnace, rock has begun to melt to form lava.