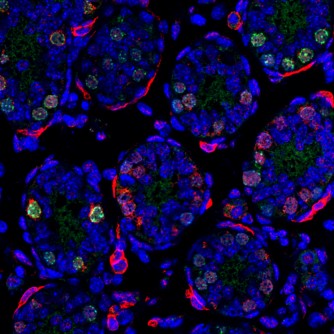 This confocal microscopic image of an 8-day-old mouse’s testicular section shows evidence of the PRC1 subcomponent Sall 4 (in green). Scientists report in Genes & Development that PRC1 is the key molecular and genetic switch that activates production of healthy male sperm, an important clue to understanding the causes of male infertility or congenital illness.

Newswise — CINCINNATI – When it comes to male reproductive fertility, timing is everything. Now scientists are finding new details on how disruption of this timing may contribute to male infertility or congenital illness.

Researchers at Cincinnati Children’s Hospital Medical Center report in Genes & Development identifying the key molecular and genetic switch that activates production of healthy male sperm – but only when the time is right. The study was published online ahead of print.

The mechanism is a protein complex called Polycomb Repressive Complex 1 (PRC1). Researchers were surprised when they found that PRC1 activates specific germline genes and the production of healthy sperm.

This is because when male mammals such as humans and mice are born, they come with all the reproductive germline cells (including inheritable genetics) needed to help make healthy fertile sperm and offspring. But the sperm isn’t fertile during infancy or childhood. True to the “repressive” in its name, PRC1 also tamps down specific genes and the activation of fertile sperm production until an individual reaches reproductive age.

Researchers show in their current study that when mice reach reproductive age, the PRC1 protein complex changes. It sheds reproductive germline gene components that block fertile sperm production and substitutes in a component (Sall4) that starts spermatogenesis – the production of fertile sperm.

“A long-standing question has been how reproductive germline genes are activated in a precise and timely manner. Our study answers this fundamental question by identifying novel epigenetic machinery that directs timely activation of spermatogenesis,” said Satoshi Namekawa, PhD, lead study investigator and member of the Division of Reproductive Sciences in the Cincinnati Children’s Perinatal Institute.  “This has a very high impact because we found that this repressor of sperm production, PRC1, has a new function by promoting gene activation to make sperm when the time comes.”

The scientists also found that when PRC1 is disrupted, such as in male mice bred to not express PRC1, the animals have smaller testes and are unable to produce healthy sperm or offspring. Researchers still need to find out precisely how or why PRC1 changes its role from sperm suppressor to activator.

The current study opens the door to asking intriguing new questions about how lifestyle or other environmental factors might affect a male’s reproductive capabilities through epigenetics – or how environmental factors can turn genes on or off in the body, Namekawa said. The findings also provide an opportunity to determine whether PRC1 or one of its genetic/molecular partners (like Sall4) can be useful as clinical biomarkers for male infertility.

Raising the stakes for these answering these questions, Namekawa and other researchers have learned that disruptions or epigenetic changes to an individual’s reproductive germline cells can be passed on to subsequent generations of offspring.