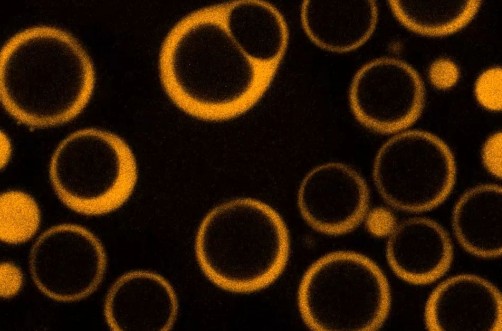 Newswise — LA JOLLA, CA – June 12, 2017 – Scientists at The Scripps Research Institute (TSRI) have solved a cellular mystery that may have important implications for fundamental biology and diseases like ALS. Their new research suggests that RNA may be the secret ingredient that helps cells to assemble, organize internal architecture, and ultimately dissolve dynamic droplet-like compartments.

These droplet-like structures are commonly known as membraneless organelles, and they are key to how cells compartmentalize their biochemistry and regulate processes such as gene expression and response to stress.

For 200 years, scientists have known of the existence of membraneless organelles in cells and wondered how they are regulated. Recent studies suggested that increasing the fraction of RNA can lead to the formation of protein-RNA droplets by a process called liquid-liquid phase separation.

“It is basically the same type of immiscibility phenomenon that drives oil to form droplets in water,” said TSRI Associate Professor Ashok Deniz, who co-led the study published recently in the journal Angewandte Chemie as a Very Important Paper (VIP). “While several weak biomolecular forces collectively result in protein-RNA droplet formation, we focused on one particular type in this study: electrostatic interactions driven by oppositely charged biomolecules. A major discovery was that further increase in RNA concentration can dissolve these droplets, bringing back a homogeneous liquid phase.”

The speed at which these droplets form and dissolve may be key to cellular survival. “Droplets can form and dissolve as they are needed, which allows cells to adapt very quickly to cellular stress,” said Research Associate Priya Banerjee, who co-led the study and served as co-first author with graduate students Anthony N. Milin and Mahdi Muhammad Moosa of TSRI.

The new study suggests that the negative charge of RNA molecules is a key to both creating and dissolving droplets. “RNA is like a double agent,” said Banerjee.

How Droplets Form and Disappear

RNA has an overall negative charge. When it initially comes in contact with positively-charged proteins, the oppositely charged molecules attract each other. Together, they create a molecular assembly and form liquid droplets. These droplets allow cells to carry out important functions.

The researchers also found that droplets will quickly dissolve when one increases RNA in the system.

“Adding more RNA to this system disrupts the fine balance between negative and positive charges, leading to the formation of negatively-charged assemblies that now repel each other, thus dissolving the droplet,” said study co-author Paulo L. Onuchic, a graduate student in the Deniz Lab.

This unique finding sheds light on an unexpected regulatory pathway. The research also challenges the previous conception that biomolecular forces that create droplets should be reversed to dissolve them. Instead of reversing the process—through either removal of RNA or posttranslational modification of the protein to destroy its positive charge—the researchers found that the system can simply add more RNA to dissolve a droplet.

“The window-like behavior of droplet formation as a function of RNA concentration observed here exhibits a unidirectional route that can be exploited by cells using processes such as transcription,” said Banerjee.

In further experiments, the team demonstrated that RNA synthesis by cellular machineries indeed forms and dissolves these droplets.

The fact that RNA can dissolve droplets gave the researchers a unique chance to control RNA addition and watch the dissolution process. “To our surprise, instead of a simple process of droplet dissolution, we observed hollow spheres forming inside droplets. Taking a step back, you see that by adding more RNA, we are creating low-density droplets inside high-density droplets,” said Deniz.

Deniz compared this phenomenon to an ice cube melting from the inside. Interestingly, these internal droplets, called vacuoles, resemble the complex internal substructures that are typically observed in a number of cellular droplet-like organelles.

“The key to creating vacuoles is this unidirectional transition from an initial homogeneous liquid to two immiscible liquid phases and back to a homogeneous phase just by increasing the fraction of RNA,” added Banerjee.

The team went on to test whether these findings would apply to a key protein found in stress-granules, important “droplet” organelles that protect cells during stress. They investigated an RNA-binding protein called FUS, which has been implicated in ALS.

“With FUS, we found that RNA can both form and dissolve droplets in the same fashion as the simpler model system. Remarkably, FUS droplets also exhibited complex internal substructures, which paves the way for ascertaining the biological role of these vacuoles,” said Milin.

While this research is still in its early stages, the researchers believe mutations in FUS may interfere in the normal droplet dynamics in some patients with ALS, possibly stopping their cells from coping properly with cellular stress.

The work opens a number of avenues for future research in cell biology and disease, including quantitative studies of this specific type of phase transition in other biological systems, understanding the molecular determinants in proteins and RNA that control the droplet dynamics, and further studies of complex patterning of droplets.

The study, “Reentrant phase transition drives dynamic substructure formation in ribonucleoprotein droplets,” was supported by the National Institutes of Health, the National Institute of General Medical Sciences (grants RO1 GM066833 and RO1 GM115634), a Donald and Delia Baxter Fellowship, and a postdoctoral fellowship from the American Heart Association.