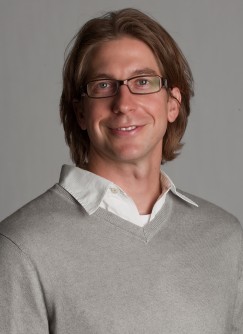 Gavin Rumbaugh, PhD, is an associate professor in the Department of Neuroscience at The Scripps Research Institute, Florida campus.

Newswise — JUPITER, FL, June 18, 2014 – Scientists from the Florida campus of The Scripps Research Institute (TSRI) have shed light on how a specific kind of genetic mutation can cause damage during early brain development that results in lifelong learning and behavioral disabilities. The work suggests new possibilities for therapeutic intervention.

The study, which focuses on the role of a gene known as Syngap1, was published June 18, 2014, online ahead of print by the journal Neuron. In humans, mutations in Syngap1 are known to cause devastating forms of intellectual disability and epilepsy.

“We found a sensitive cell type that is both necessary and sufficient to account for the bulk of the behavioral problems resulting from this mutation,” said TSRI Associate Professor Gavin Rumbaugh, who led the study. “Because we found the root biological cause of this genetic brain disorder, we can now shift our research toward developing tailor-made therapies for people affected by Syngap1 mutations.”

In the study, Rumbaugh and his colleagues used a mouse model to show that mutations in Syngap1 damage the development of a kind of neuron known as glutamatergic neurons in the young forebrain, leading to intellectual disability. Higher cognitive processes, such as language, reasoning and memory arise in children as the forebrain develops.

Repairing damaging Syngap1 mutations in these specific neurons during development prevented cognitive abnormalities, while repairing the gene in other kinds of neurons and in other locations had no effect.

Rumbaugh noted prenatal diagnosis of some infant genetic disorders is on the horizon. Technological advances in genetic sequencing allow for individual genomes to be scanned for damaging mutations; it is possible to scan the entire genome of a child still in the womb. “Our research suggests that if Syngap1 function can be fixed very early in development, this should protect the brain from damage and permanently improve cognitive function,” said TSRI Research Associate Emin Ozkan, a first author of the study, along with TSRI Research Associate Thomas Creson. “In theory, patients then wouldn't have to be subjected to a lifetime of therapies and worry that the drugs might stop working or have side effects from chronic use.”

Mutations to Syngap1 are a leading cause of “sporadic intellectual disability,” resulting from new, random mutations arising spontaneously in genes, rather than faulty genes inherited from parents. Intellectual disability affects approximately one to three percent of the population worldwide. Rumbaugh and his colleagues are continuing to investigate. “Our findings have also identified exciting potential biomarkers in the brain of cognitive failure, allowing us to test new therapeutic strategies in our Syngap1 animal model,” said Creson.

In addition to Rumbaugh, Ozkan and Creson, other authors of the study “Reduced Cognition in Syngap1 Mutants Is Caused by Isolated Damage within Developing Forebrain Excitatory Neurons” include Courtney Miller and Camilo Rojas of TSRI; Enikö A. Kramár, Ron R. Seese, Alex H. Babyan, Yulin Shi, Xiangmin Xu and Gary Lynch of the University of California, Irvine; and Rocco Lucero and Jeffrey L. Noebels of Baylor College of Medicine. The study was supported by the National Institute for Neurological Disorders and Stroke (grants R01NS064079, NS29709 and NS045260), National Institute for Mental Health (grant R01MH096847), National Institute for Drug Abuse (grants R01 DA034116 and R03 DA033499), the University of California, Irvine, and the State of Florida.