Sculpted by Starlight: A Meteorite Witness to the Solar System’s Birth

Researchers use unusual meteorite to gain insight into our solar system’s past, present 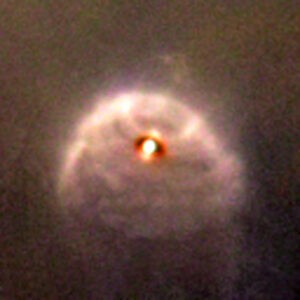 The Orion nebula, a stellar nursery similar to the one which birthed our solar system, is pictured over a fragment of Acfer 094. 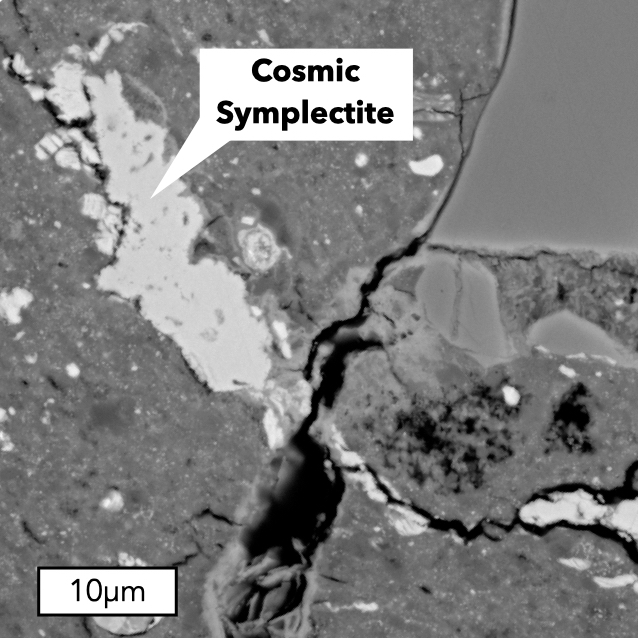 Newswise — In 2011, scientists confirmed a suspicion: There was a split in the local cosmos. Samples of the solar wind brought back to Earth by the Genesis mission definitively determined oxygen isotopes in the sun differ from those found on Earth, the moon and the other planets and satellites in the solar system.

Early in the solar system’s history, material that would later coalesce into planets had been hit with a hefty dose of ultraviolet light, which can explain this difference. Where did it come from? Two theories emerged: Either the ultraviolet light came from our then-young sun, or it came from a large nearby star in the sun’s stellar nursery.

Now, researchers from the lab of Ryan Ogliore, assistant professor of physics in Arts & Sciences at Washington University in St. Louis, have determined which was responsible for the split. It was most likely light from a long-dead massive star that left this impression on the rocky bodies of the solar system. The study was led by Lionel Vacher, a postdoctoral research associate in the physics department’s Laboratory for Space Sciences.

Their results are published in the journal Geochimica et Cosmochimica Acta.

“We knew that we were born of stardust: that is, dust created by other stars in our galactic neighborhood were part of the building blocks of the solar system,” Ogliore said.

“But this study showed that starlight had a profound effect on our origins as well.”

All of that profundity was packed into a mere 85 grams of rock, a piece of an asteroid found as a meteorite in Algeria in 1990, named Acfer 094. Asteroids and planets formed from the same presolar material, but they’ve been influenced by different natural processes. The rocky building blocks that coalesced to form asteroids and planets were broken up and battered; vaporized and recombined; and compressed and heated. But the asteroid that Acfer 094 came from managed to survive for 4.6 billion years mostly unscathed.

“This is one of the most primitive meteorites in our collection,” Vacher said. “It was not heated significantly. It contains porous regions and tiny grains that formed around other stars. It is a reliable witness to the solar system’s formation.”

Acfer 094 is also the only meteorite that contains cosmic symplectite, an intergrowth of iron-oxide and iron-sulfide with extremely heavy oxygen isotopes — a significant finding.

The sun contains about 6% more of the lightest oxygen isotope compared with the rest of the solar system. That can be explained by ultraviolet light shining on the solar system’s building blocks, selectively breaking apart carbon monoxide gas into its constituent atoms. That process also creates a reservoir of much heavier oxygen isotopes. Until cosmic symplectite, however, no one had found this heavy isotope signature in samples of solar system materials.

With only three isotopes, however, simply finding the heavy oxygen isotopes wasn’t enough to answer the question of the origin of the light. Different ultraviolet spectra could have created the same result.

“That’s when Ryan came up with the idea of sulfur isotopes,” Vacher said.

Sulfur’s four isotopes would leave their marks in different ratios depending on the spectrum of ultraviolet light that irradiated hydrogen sulfide gas in the proto-solar system. A massive star and a young sun-like star have different ultraviolet spectra.

Cosmic symplectite formed when ices on the asteroid melted and reacted with small pieces of iron-nickel metal. In addition to oxygen, cosmic symplectite contains sulfur in iron sulfide. If its oxygen witnessed this ancient astrophysical process — which led to the heavy oxygen isotopes — perhaps its sulfur did, too.

“We developed a model,” Ogliore said. “If I had a massive star, what isotope anomalies would be created? What about for a young, sun-like star? The precision of the model depends on the experimental data. Fortunately, other scientists have done great experiments on what happens to isotope ratios when hydrogen sulfide is irradiated by ultraviolet light.”

Sulfur and oxygen isotope measurements of cosmic symplectite in Acfer 094 proved another challenge. The grains, tens of micrometers in size and a mixture of minerals, required new techniques on two different in-situ secondary-ion mass spectrometers: the NanoSIMS in the physics department (with assistance from Nan Liu, research assistant professor in physics) and the 7f-GEO in the Department of Earth and Planetary Sciences, also in Arts & Sciences.

“They are experts in high-precision in-situ sulfur isotope measurements for biogeochemistry,” Ogliore said. “Without this collaboration, we would not have achieved the precision we needed to differentiate between the young sun and massive star scenarios.”

The sulfur isotope measurements of cosmic symplectite were consistent with ultraviolet irradiation from a massive star, but did not fit the UV spectrum from the young sun. The results give a unique perspective on the astrophysical environment of the sun’s birth 4.6 billion years ago. Neighboring massive stars were likely close enough that their light affected the solar system’s formation. Such a nearby massive star in the night sky would appear brighter than the full moon.

Today, we can look to the skies and see a similar origin story play out elsewhere in the galaxy.

“We see nascent planetary systems, called proplyds, in the Orion nebula that are being photoevaporated by ultraviolet light from nearby massive O and B stars,” Vacher said.

“If the proplyds are too close to these stars, they can be torn apart, and planets never form. We now know our own solar system at its birth was close enough to be affected by the light of these stars,” he said. “But thankfully, not too close.”

This work was supported by the McDonnell Center for Space Sciences at Washington University in St. Louis and NASA grant NNX14AF22G.