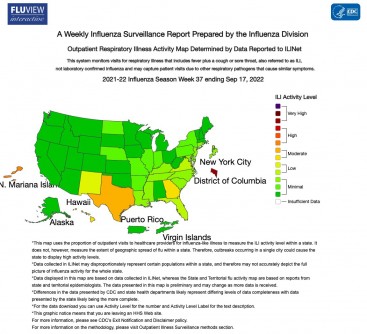 The CDC surveillance map for influenza-like illness activity for the week ending September 17 shows that Texas is dark orange for moderately high activity.

Newswise — HOUSTON-(Sept. 27, 2022) -- According to the CDC’s latest weekly report, Texas is the only state in the U.S., outside of DC, that already has a moderately high rate of flu cases. This doesn’t look good for flu season, which was uncharacteristically low last year because of masks and people isolating. Houston Methodist experts are encouraging Houstonians and Texans to get the flu shot early. Dr. S. Wesley Long, a pathologist and Medical Director of Diagnostic Microbiology at Houston Methodist, says he doesn’t usually see cases this high until December, which is when the season usually peaks.

Here are some important flu facts to consider: