Sensitive? Emotional? Empathetic? It Could Be in Your Genes 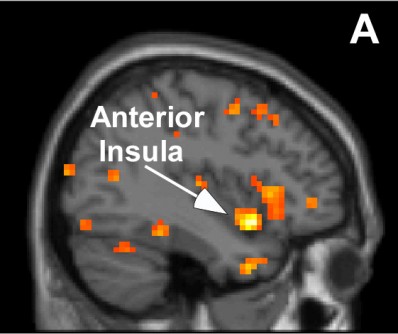 This is an overall fMRI composite comparison of the brains of highly sensitive people (HSP) compared to non-HSPs. The areas in color represent some of the regions of the brain where greater activation occurs in HSPs compared to non-HSPs. The brain region highly associated with empathy and noticing emotion (Anterior Insula) shows significantly greater activation in HSPs than non-HSPs when viewing a photo of their partner smiling.

Newswise — Stony Brook, NY, June 19, 2014 – Do you jump to help the less fortunate, cry during sad movie scenes, or tweet and post the latest topics and photos that excite or move you? If yes, you may be among the 20 percent of our population that is genetically pre-disposed to empathy, according to Stony Brook University psychologists Arthur and Elaine Aron. In a new study published in Brain and Behavior, Drs. Aron and colleagues at the University of California, Albert Einstein College of Medicine, and Monmouth University found that Functional Magnetic Resonance Imaging (fMRI) of brains provide physical evidence that the “highly sensitive” brain responds powerfully to emotional images.

Previous research suggests that sensory processing sensitivity (SPS) is an innate trait associated with greater sensitivity, or responsiveness, to environmental and social stimuli. According to Dr. Arthur Aron, the trait is becoming increasingly associated with identifiable behaviors, genes, physiological reactions, and patterns of brain activation. Highly sensitive people (HSP), those high in SPS, encompass roughly 20 percent of the population. Elaine Aron, PhD, originated the HSP concept. Humans characterized as HSPs tend to show heightened awareness to subtle stimuli, process information more thoroughly, and be more reactive to both positive and negative stimuli. In contrast, the majority of people have comparatively low SPS and pay less attention to subtle stimuli, approach situations more quickly and are not as emotionally reactive.

In “The Highly Sensitive Brain: An fMRI study of Sensory Processing Sensitivity and Response to Others’ Emotions,” Drs. Aron and colleagues used fMRI brain scans to compare HSPs with low SPS individuals. The analysis is the first with fMRI to demonstrate how HSPs’ brain activity processes others’ emotions.

The brains of 18 married individuals (some with high and some with low SPS) were scanned as they viewed photos of either smiling faces, or sad faces. One set of photos included the faces of strangers, and the other set included photos of their husbands or wives.

“We found that areas of the brain involved with awareness and emotion, particularly those areas connected with empathetic feelings, in the highly sensitive people showed substantially greater blood flow to relevant brain areas than was seen in individuals with low sensitivity during the twelve second period when they viewed the photos,” said Dr. Aron, a Research Professor in Psychology at Stony Brook. “This is physical evidence within the brain that highly sensitive individuals respond especially strongly to social situations that trigger emotions, in this case of faces being happy or sad.”

The brain activity was even higher when HSPs viewed the expressions of their spouses. The highest activation occurred when viewing images of their partner as happy. Most of the participants were scanned again one year later, and the same results occurred.

Areas of the brain indicating the greatest activity – as shown by blood flow – include sections known as the “mirror neuron system,” an area strongly associated with empathetic response and brain areas associated with awareness, processing sensory information and action planning.

Dr. Aron believes the results provide further evidence that HSPs are generally highly tuned into their environment. He said the new findings via the fMRI provide evidence that especially high levels of awareness and emotional responsiveness are fundamental features of humans characterized as HSPs.

The study was led by Bianca Acevedo, PhD, of the University of California, Santa Barbara, in collaboration with Dr. Arthur Aron, her doctoral advisor while attending Stony Brook University, and with Dr. Elaine Aron.