Shipment tracking for 'fat parcels' in the body

Newswise — Without fat, nothing works in the body: These substances serve as energy suppliers and important building blocks - including for the envelopes of living cells. Numerous diseases are related to disorders in the fat metabolism, such as obesity or cancer. Researchers from the LIMES Institute at the University of Bonn are now demonstrating how the fat metabolism can be monitored down to the individual liver cell of a mouse with the greatest sensitivity. This opens up several possibilities, such as minimizing the side effects of new drugs on the fat metabolism. The scientists now present their study in the journal "Nature Methods".

Many people think of the padding on their stomach or hips when they hear the term "body fat". "But no human being could survive without lipids, as these substances are called in chemistry," says Prof. Dr. Christoph Thiele from the LIMES Institute at the University of Bonn. Because fats are important energy stores. For instance, if the fat metabolism in cancer patients is disrupted, the result is dramatic weight loss. In addition, lipids often serve as building blocks for the envelopes of living cells, such as brain cells. This is why disorders can also lead to neurological diseases.

Scientists are therefore searching for methods that enable them to track the path from the uptake of fats through the metabolism in the body to excretion using a kind of "tracking" process - similar to a posted parcel that can be tracked on its way to its destination. Previously, researchers used radioactive substances, fluorescent dyes or heavy isotopes of hydrogen-2 (deuterium) to mark the "fat parcels".

"The problem with this is that the marked compounds cannot be fully distinguished from the unmarked ones," explains Thiele. This means that only a few marked main compounds can be traced and that quite large amounts of substance are required for this.

Together with his team colleagues Klaus Wunderling and Philipp Leyendecker, the biochemist has now shown how fats can be traced in the body of mice using a much more sensitive and effective method. They added fatty acids to the liver cells of the mice, which were marked with an additional triple bond, a so-called alkyne group. Subsequently, the metabolic products bound to special so-called reporter molecules. In a further step, the compounds collided with gas molecules while their weight was being measured in the mass spectrometer, causing them to decompose into specific substances on which the markings finally became visible. "This decay reaction produces very strong signals for the marked lipids in the mass spectrometer," said Thiele. This allows a clearer distinction between marked and unmarked lipids, and the measurements are about 1000 times more sensitive than with conventional methods. In addition, it is much faster: Results take minutes instead of hours.

"Around 100 different marked lipids can actually be traced down into individual liver cells," explains the biochemist. This makes it possible to examine both the normal metabolic pathway and pathological deviations in detail. The examination of mouse liver cells was an obvious choice for the researchers because the liver is the "main hub" for fat metabolism.

However, this method is not yet suitable for human nutrition experiments. "We still don't know exactly what the fatty acids coupled to alkyne groups do in the human body when they are ingested with food," says Thiele. Nevertheless, the researcher is convinced that this method could be used to investigate the side effects of drugs on fat metabolism and possibly reduce these considerably. As consumption experiments on humans are currently not possible, the side effects could be tested on cell cultures or organoids. Thiele: "This makes it easy to see how the lipid metabolism is altered by the active substances." 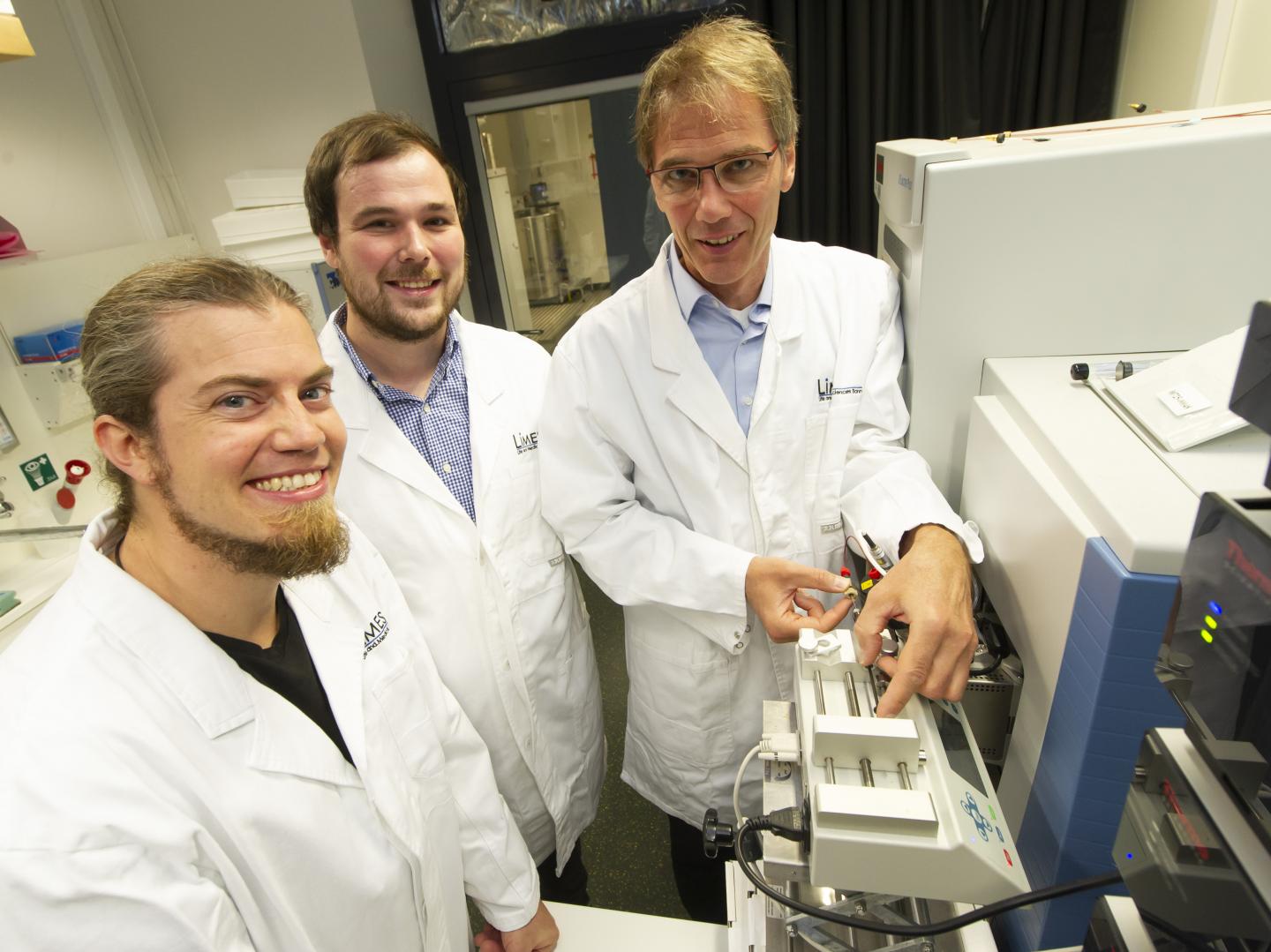 Caption: (from left) Klaus Wunderling, Philipp Leyendecker and Prof. Dr. Christoph Thiele at the LIMES-Institute at the University of Bonn. 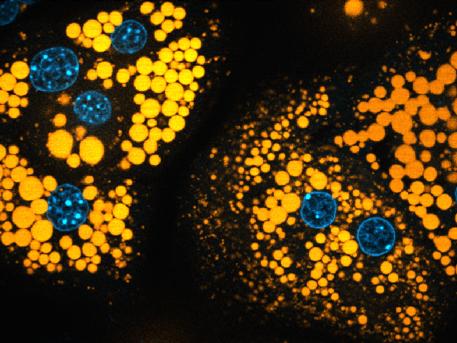 Caption: that are full of fat droplets (orange). The cell nuclei are shown in blue.