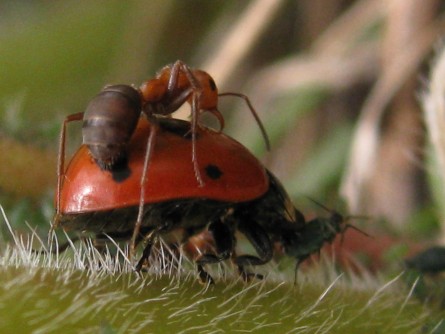 Newswise — TALLAHASSEE, Fla. —Tiny ants may seem like an odd food source for black bears, but the protein-packed bugs are a major part of some bears’ diets and a crucial part of the food web that not only affects other bugs, but plants too.

In a paper published this week by Ecology Letters, Florida State University researcher Josh Grinath examines the close relationship among bears, ants and rabbitbrush — a golden-flowered shrub that grows in the meadows of Colorado and often serves as shelter for birds.

Scientists have increasingly found that no plant or animal species exist in a vacuum, but tracing and understanding their complex interactions has been more of a challenge.

Grinath, who finished his doctorate in December working in the labs of Associate Professors Nora Underwood and Brian Inouye, had spent several years monitoring ant nests in a mountain meadow in Almont, Colo. On one visit, he discovered that bears disturbed the nests, which led him to wonder exactly how this disturbance might affect other plants and animals in the meadow.

From 2009 to 2012, Grinath, Underwood and Inouye collected data on bear damage to ant nests. Simultaneously, the team realized that the nearby rabbitbrush, a dominant plant in the area, was growing better and reproducing more near damaged nests.

Eventually, they were able to figure out why.

The missing link was an insect called a treehopper, a tiny cicada-like arthropod that sucks sap out of plants.

Grinath had previously studied the relationship between the ant and the treehopper and knew that the two had a mutualistic relationship, meaning they benefitted from one another.

So, the research team began a series of controlled field experiments to see what would happen to treehoppers with more ants around, and then with fewer ants.

They found that ants didn’t prey on the treehoppers or the rabbitbrush. Rather, the ants scared away other bugs such as beetles that typically prey on treehoppers.

In a situation where bears disturbed and ate ants, other bugs were free to prey on the treehoppers and other plant-feeding insects, and thus the rabbitbrush thrived. This study provides a reminder of how interconnected many species are in an ecosystem. But, it also provides a bit of a warning for the future.

Other studies have found that bears’ diets are changing and many populations are now eating human trash regularly instead of ants and other traditional food sources.

“If bears are eating trash instead of ants, that could compromise the benefits the plants are receiving,” Grinath said. “These indirect effects are an important consideration in conservation.”

Grinath’s work was funded by the Rocky Mountain Biological Laboratory and the STAR Fellowship from the Environmental Protection Agency. Additional funding was provided by the National Science Foundation.