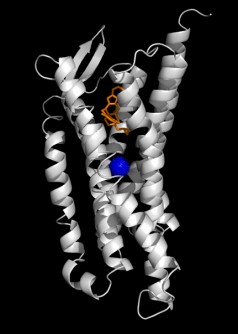 Newswise — CHAPEL HILL, NC – Scientists at the UNC School of Medicine and The Scripps Research Institute have discovered how salt acts as a key regulator for drugs used to treat a variety of brain diseases including chronic pain, Parkinson’s disease, and depression. The finding, published online January 12 in the journal Nature, has cleared the way for more precisely targeted therapies for a host of diseases with the potential of fewer side effects.

“There’s a reason why certain drugs, for instance, work well for some people but not others and why those drugs can cause serious side effects, such as seizures, addiction, and death due to overdose,” said Patrick Giguere, PhD, co-first author of the Nature paper and UNC pharmacology postdoctoral fellow. “The reason is that we haven’t known the precise biological markers for those drugs.”

Markers represent the biological abnormalities that drugs aim to treat. Currently, many approved drugs –including morphine, oxycodone, and heroin – target opioid receptors, which use a variety of pathways to transmit chemical signals in the brain. “These drugs activate all of the receptor pathways,” Giguere said. “None of them modulates just one pathway.”

This ability of opioid medications to indiscriminately target receptor pathways is likely responsible for the beneficial and harmful effects associated with these addictive and commonly abused medications.

But now, Giguere and colleagues found a way to modulate just one pathway. They discovered that tweaking specific amino acids – the building blocks of receptors – can drastically change how opioid receptors control chemical signals.

The finding offers a way to create more precisely targeted therapies with the potential for enhanced beneficial actions and fewer side effects. And since the opioid system is key for many brain processes, drugs that target these receptors could be useful for many diseases, including depression, chronic pain and Parkinson’s Disease.

At the heart of the finding is a simple element – sodium—the main component of table salt. Forty years ago scientists figured out that altering sodium concentrations in the brain changed the activity of opioid receptors. But since then, no one had figured out precisely how sodium did that. That’s because no one could create a clear picture of what the receptor looked like; researchers couldn’t see what sodium was doing. What they needed was a high-resolution crystal structure of the delta-opioid receptor. None existed until two years ago.

A crystal structure of a tiny piece of brain anatomy is similar to a snow crystal. Both have adopted a solid form that is the most stable form. Water, under specific circumstances, is most stable as a snow crystal. A protein, under certain circumstances, is most stable in a crystal form. Yet, snow and protein crystals are formed very differently. A snow flake forms when water freezes onto a dust particle. To create a crystal structure of a protein – such as a receptor – scientists have to use x-rays and liquid nitrogen to keep the protein stable. For years, this proved difficult in the case of the delta opioid receptor protein because it’s an extremely fragile part of a brain cell’s membrane.

But scientists at Scripps developed a novel technique that allowed them to create the first ever high-resolution 3-D crystal structure of the delta-opioid receptor. This sharp image revealed a sodium ion at the heart of the receptor.

With that information, Giguere and others in the lab of UNC’s Michael Hooker Distinguished Professor Bryan Roth, created unique experimental procedures to show how specific amino acids hold the sodium ion in place. They also showed how the amino acids and sodium interact in order to modulate brain signals.

“The amino acids control the sodium ion,” Giguere said. “This control is like a trigger; it has a specific function on the opioid receptor.”

When Giguere and UNC colleagues mutated the amino acids, they saw extreme changes in how the delta-opioid receptor responds to chemical signals. In one experiment, Roth’s team tweaked an amino acid to cause a major change in the signaling response of the receptor’s beta-arrestin pathway, which is responsible for shutting down chemical signaling.

These findings suggest that it’s possible to create a drug that targets specific pathways inside the delta-opioid receptor.

Current medications either turn on the opioid receptor or turn it off. Giguere’s work shows how it’s possible to fine-tune the receptor so it functions optimally.

“This is a new field of research, which we call functional selectivity,” Giguere said. “There are very few crystal structures that show how this sort of pathway selectivity can work. This is why we think our findings will lead to another, potentially better class of drugs.”

The co-first authors of the Nature paper are Patrick Giguere, PhD, a postdoctoral fellow at the UNC School of Medicine, and Gustavo Fenalti, PhD, a postdoctoral fellow in the at The Scripps Research Institute. Co-senior authors are Bryan Roth MD, PhD, Professor in the Department of Pharmacology in the School of Medicine and Director of the National Institute of Mental Health Psychoactive Drug Screening Program, and Raymond Stevens, PhD, a Professor in the Department of Integrative Structural and Computational Biology at The Scripps Research Institute.