Singing is crucial for the recognition, sex life and speciation of songbirds; new research published in Current Biology shows songbirds have extremely high-resolution control over their vocal output and can even control single muscle fibers 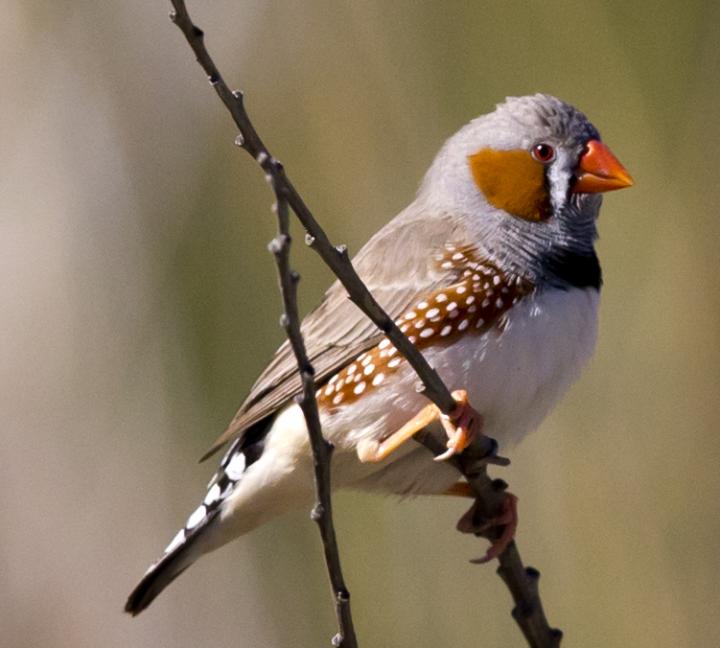 A male zebra finch from Australia

Newswise — The melodic and diverse songs of birds frequently inspire pop songs and poems, and have been for centuries, all the way back to Shakespeare's "Romeo and Juliet" or "The Nightingale" by H.C. Andersen.

Despite our fascination with birdsong, we are only beginning to figure out how this complicated behavior is being produced and which extraordinary specializations enabled songbirds to develop the diverse sound scape we can listen to every morning.

Songbirds produce their beautiful songs using a special vocal organ unique to birds, the syrinx. It is surrounded by muscles that contract with superfast speed, two orders of magnitude faster than e.g. human leg muscles.

"We found that songbirds have incredible fine control of their song, including frequency control below one Hertz", says Iris Adam, lead author on the study and Assistant Professor at Department of Biology, University of Southern Denmark.

A motor unit is the fundamental contraction unit of muscle and consists of a motor neuron and the number of muscle fibers it connects to and activates. Combining tissue preparations to count muscle and nerve fibers and mathematical models the researchers could show that a large portion of the motor units must be very small and even as small as single muscle fiber.

"Motor units vary in size from several hundreds or thousands of muscle fibers in our leg muscles down to only 5-10 in the muscles controlling eye position and the muscles in the larynx", says Dr. Coen Elemans, senior author on the study and head of the Sound Communication and Behavior group at the University of Southern Denmark.

"In zebra finch song muscles our models predicted that 13-17% of the motor neurons innervates a single muscle fiber."

This was such an extraordinary claim that the researchers developed a new technique that can measure the activity of all muscle fibers within a small muscle.

"Our new method allowed us for the first time to activate single motor neurons and visualize and record the activity of all responding muscle fibers simultaneously.", Adam says.

"Like this we were able to show that the song muscles of zebra finches indeed contain motor units a s small as one muscle fiber.", Adam adds.

To be able to understand what the effect such small motor units can have on song the researchers also measured the amount of stress the muscles can make and how such stress changes the frequency of the sound.

Adam: "Next to small motor units, we discovered that songbird vocal muscles have the lowest stress measured in any vertebrate."

"To be able to study how changes in muscle force alter the sound made by the birds' vocal organ, the syrinx, we had to invent a new setup" Elemans adds.

"This setup blows air through the syrinx while we can control the muscles with small motors".

Songbird vocal muscles certainly pack a lot of extremes. "They are among the fastest muscles known, and now we show that they are also the weakest with the highest level of control possible", says Adam.

This fine control is important. Previous research has shown that females can detect these small changes and use it to decide whether they are attracted to a male or not.

Songbirds evolved about 40 million years ago and quickly radiated into the speciose group of birds we know today. Song is crucial for females to find and judge males and can even drive speciation. A few important special features are thought to have been important for their success. Just as humans, songbirds need to learn their song from a tutor by imitation.

Adam: "We think that next to a special syrinx and their amazing ability to imitate sounds, the fine gradation of the song features such as pitch has increased the amount of different sounds a bird can make."

"We suggest that the fine graduation of sound has contributed to the radiated of songbirds", Elemans concludes.