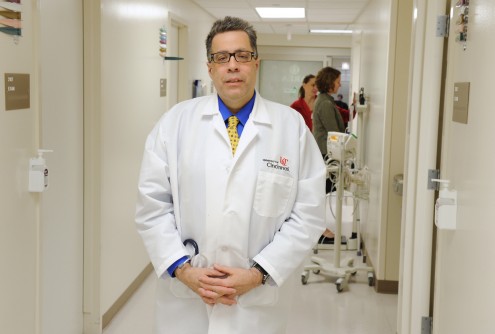 CINCINNATI—Researchers at the University of Cincinnati (UC) have found that a cancer stem cell vaccine, engineered to express a pro-inflammatory protein called interleukin-15 (IL-15) and its receptor (IL-15Ralpha), caused T cell production in animal models and enhanced immune responses against tumors.

This T cell production showed a cellular immune response that could lead to new immunotherapy treatments for cancer with improved side effects.

These findings are being presented via poster abstract at the American Society of Gene and Cell Therapy’s annual meeting in Washington, D.C., May 10-13.

"IL-15 is a powerful stimulator of the maturation and activation of T cells and natural killer cells that recognize and attack tumor cells. Human IL-15 was first used in Phase I clinical trials to test its efficacy for treatment of a number of cancers, including melanoma and kidney cancer, but caused a number of side effects that made high doses difficult for patients to tolerate,” says John Morris, MD, co-author of this study, clinical co-leader of the Molecular Therapeutics and Diagnosis Program for the Cincinnati Cancer Consortium, co-leader of the UC Cancer Institute's Comprehensive Lung Cancer Program, professor in the Division of Hematology Oncology at the UC College of Medicine and UC Health medical oncologist. "In this work, we showed that transferring the genes for both IL-15 with its receptor into cancer cells increased the cell-surface presentation of IL-15 to T cells, and in turn, stopped the tumor cells from reproducing with little evidence of side effects in animal models.

“In an effort to enhance antitumor activity and reduce side effects, we studied a vaccine targeting cancer stem cells, the cells in a tumor thought to be resistant that give rise to recurrent tumors after treatment, by genetically altering them to express IL-15 and IL-15Ralpha to see if lung cancers implanted in animal models shrunk.”

“Animal lung cancer stem cells expressing IL-15 and IL-15Ralpha stimulated proliferation of T cells suggesting the ability to enhance immune responses,” he says. “These findings further support evidence of IL-15’s ability as a cancer treatment. We are continuing vaccination studies in animal models with hopes of moving this research to a Phase I trial in humans to see if side effects are reduced.”

Donatien Toukam, PhD, post-doctoral fellow in the Division of Hematology Oncology, is the lead author of this study funded in part by the Lcs Foundation. He cites no conflicts of interest.