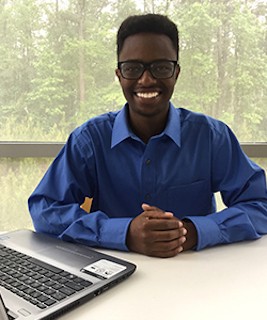 Mwaniki won in the undergraduate category for creating a computer application that offers a visual translation of SECOORA’s archived pH data and engages citizens in oceanographic science through crowdsourcing.

At Kennesaw State, Mwaniki is involved in the Student Assistance for Leadership in Teaching (SALT) program, where he works with Lisa G. Adams, associate professor of biology and biology education, who developed Student Programs Like Aquatic Science Sampling Headquarters (SPLASSH), a web application designed to crowdsource water data in real time.

As a senior computer science major, Mwaniki’s educational background was crucial in the further development of SPLASSH, which is housed in KSU’s College of Science and Mathematics.

Mwaniki was able to build upon the SPLASSH platform, creating a computer application that offers the public a way to search, store and analyze data available from SECOORA. Users will be able to compare variables over time and location through graphs, plots and charts with the added ability to save their queries for future use.

“Winning the data challenge provides me the opportunity to apply skills gained in my courses to create a web application that provides users the ability to visualize and analyze pH data,” said Mwaniki.

The goal is to engage users with the ability to visualize SECOORA’s archived data with Mwaniki’s newly proposed application and invite them to contribute their pH data on the SPLASSH platform, which may help increase the coverage of coastal pH monitoring. Citizen scientists may store and retrieve their own data, while publicly crowdsourced data will be separated from SECOORA’s observatory data.

Through this new application, Mwaniki wanted to provide a way for citizens to access a huge depository of data and add their own, while maintaining data quality and managing data storage efficiently. He said that he was eager to work with SECOORA’s pH data because it was important to increase the overall awareness of the impact of ocean acidification on coastal waters.